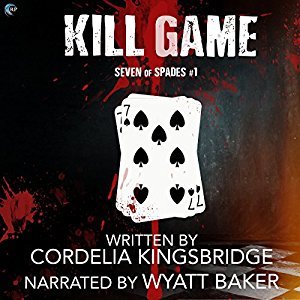 Are you looking for a good mystery/thriller with a strong touch of romance? Hang around this may be just what you're looking for...

I've been seeing so many good...I mean really good reviews and wanting to read this one for quite a while now. Cordelia Kingsbridge is a relatively new author to me. My only previous experience with this author was 'Can't Hide From Me' narrated by Nick J. Russo and I loved that book so when the opportunity to enjoy another book by this author presented itself...well, what else could I say but 'yes please'.

'Kill Game' is the first book in this author's 'Seven of Spades' series and I'm hooked, all in, basically spending my time trying to figure out what I can put off, how little sleep do I need, anything to find a way to add more reading time to my day so I can get to it.

Levi Abrams is a homicide detective who's life is reeling he's dealing from the fallout of a fatal shooting, the end of a 3 year long relationship, perpetually crossing paths with the enigmatic and annoyingly charming bounty hunter Dominic Russo add in a serial killer who seems to be taking a keen interest in playing a cat and mouse game with him and Levi's got more on his plate than most men would even begin to be able to deal with.

Dominic likes his life free and easy...he'll happily skirt around complications like prickly, uptight detectives or at least he'll try until he stumbles onto a crime scene  created by the same killer, a killer who as things progress seems to be developing a vested interest in the well being of a certain homicide detective. Dominic's  a former Army Ranger dealing with his own issues...working as both a bounty hunter and bartender, Dominic's a recovering compulsive gambler living in Las Vegas.As the police continue their hunt for a serial killer it's the events surrounding this very situation that continue to bring the two men together enabling their relationship to develop on a slower but more natural basis...or as naturally as things can get when one is looking for a serial killer anyways.

Along with the beginnings of a series that promises to be exceptional I was fortunate enough to also discover a talented 'new to me' narrator in the person of 'Wyatt Baker'. Needless to say I'm delighted to have the name of yet another narrator whose audio books I can not only enjoy but look forward to.


'Kill Game' is only the beginning of things so there's not a lot of sexy times between these two men but there's definitely indications that when Levi and Dominic do get together it's going to be purely combustible...we got one glimpse of how it's going to be between these two men and I for one am willing to wait for more. Especially when there's a story like this one's got to fill the time with.

So far this one's got me totally guessing as in 'I have no clue' who the 'Seven of Spades' could be and I'm loving that.  I'm looking forward to not only seeing how the characters in this series will develop but how their relationship will progress as they work together to catch a killer and fit into each other's lives.  Overall 'Seven of Spades' is shaping up to be one of the most promising romance/mystery/thriller series that I've encountered in quite a while.  I don't mind being able to figure out a mystery early in a book or series if it's not as prominent a part of the story as this seems to be but when the story is so strongly entrenched in the events of the mystery I want to be kept guessing and sitting on the edge of my seat which is pretty much where I've been from the beginning of this one and to be honest I'm still sitting there waiting and hoping to get to the next book ASAP!


An audio book of 'Kill Game' was graciously provided by the publisher in exchange for an honest review.