Blogtour: Rogue In The Making by TJ Nichols

Rogue In The Making 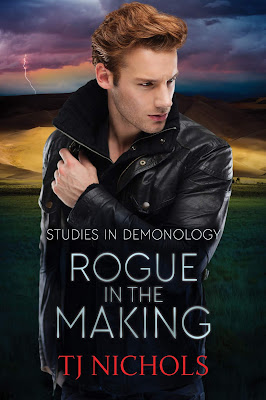 The blood sacrifices have brought rain to Demonside, but across the void, the Warlock College of Vinland is still storing and gathering magic, heedless of the warnings of the international magical community. The underground is full of warlocks who disagree with the college, but do they care about wizards and demons or only about snatching power?

With a foot in each world, Angus is no longer sure whom he can trust. The demons don’t trust humans, and even though he is learning more magic, he will never be one of them. He is human and only tolerated. Some demons would be happy to slit his throat. It’s only because his demon is powerful in his own right that Angus is alive.

Saka only has a year to prove that Angus’s people can change and that the magic taken will be rebalanced, but the demons want action. His affection for Angus is clouding his judgment and weakening his position in the tribe. Time is running out, and he must make a choice.

What happens after the apocalypse?
The Young Adult fiction of my teenage years was all about surviving a nuclear war (I’m dating myself, I know). I glommed it all up (I read a lot, usually sci fi or fantasy as a way to be elsewhere). No matter how bad it was—and some of the stories were pretty grim—people survived. And something about the survival theme of the post-apocalyptic stories really resonated.
While survival was the theme of those books, as an adult I started to wonder what happens after merely surviving? At some point the world has to be put back together. Someone has to start governing, and society has to rebuilt.
In the Studies in Demonology series there are hints about previous demon-human war. I don’t go into detail, only that it was bad and afterward magic use had to be regulated to stop it from happening again…so in stepped the Warlock College, a place to oversee the teaching of warlocks (those who used magic drawn from demons).
The Warlock College was supposed to make sure that magic was never abused again and that there wasn’t a second war between humans and demons.

For a time that was how it worked, but human memories are short and history that isn’t taught is bound to be repeated.
The stealing of power doesn’t happen overnight, it happens piece by piece until people suddenly realize that they have none and that there is nothing they can do. This is what happened with the Warlock College, what happened with the best of intentions has becomes so powerful that it even controls the government. They are going to prevent another demon war by killing all demons, and by taking all magic for themselves.
I don’t want to reveal too much about what happens in the story, except to say that Angus is betrayed, Saka has to choose which side he is on and it all gets very messy, and will only get worse until the end of final book, Blood for the Spilling (I could not have made that title more obvious if I’d tried).
This time maybe Vinland, and the other magic using countries, can avert a war and an ice age. Maybe this time they will learn…or maybe not. Maybe humans are doomed to repeat the same mistakes because we fall for the charismatic leader who tells us what we need to hear.
Wizards are dangerous, they can’t use proper magic.
Warlocks will keep you safe from demons.
Rogues are on the demons’ side and must be hunted down and killed.
As an adult I can see that surviving an apocalyptic event doesn’t mean survival is assured. If I were to go back and tell my teenage self that it would destroy me, back then I wanted to believe that everything would be okay after the toxic dust had settled and the world had stopped burning. Even though I know that human nature won’t change, I do believe there will always be those who rise up. Angus didn’t want to be a hero, but someone has to step up and do the right thing before it’s too late.

TJ Nichols is an avid runner and martial arts enthusiast who first started writing as child. Many years later while working as a civil designer, TJ decided to pick up a pen and start writing again. Having grown up reading thrillers and fantasy novels, it’s no surprise that mixing danger and magic comes so easily, writing urban fantasy allows TJ to bring magic to the every day. After traveling all over the world and Australia, TJ now lives in Perth, Western Australia.