Blogtour: In The Desert by Elliot Joyce 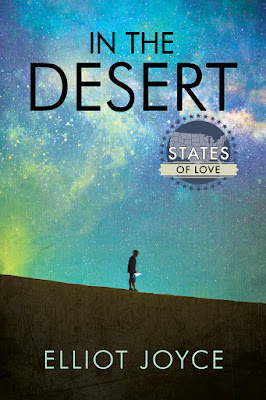 Can a Navajo trans teen and a nerdy Catholic find the place they belong... and maybe themselves? In the desert, anything is possible….

When Wren came out as transgender before his senior year, it cost him most of his friends. His father hopes joining a Boy Scout troop might help Wren meet other young men his age and be accepted for who he is.

Felipe Nieves wants the new guy in the troop to feel comfortable, and he reaches out to Wren. They become fast friends… with something more beneath the surface. Those feelings confuse Felipe, since his religion considers this a sin—and he’s always assumed he was straight—but he can’t help pining for Wren. Asking him out will take courage, and getting together won’t be easy… but through their friendship, both young men might find their identities… and learn to embrace them in a unique coming-of-age story set against the beauty of the American Southwest.

Hello, I’m Elliot Joyce, the author of the novella In The Desert. I was super excited to be invited to write a guest post for My Fiction Nook and I want to thank them for hosting me. In The Desert follows a pretty traditional structure — two boys meet and romance blossoms between them — with two non-traditional protagonists. Wren is a transgender Navajo and Felipe is a Mexican-American Catholic who thinks he’s straight. Hardly the first people who come to mind when talking about a romance

But character creation is one of the best parts of writing and while I’ve talked about Felipe in the past, I wanted to talk about Wren. Whereas Felipe was very difficult to write, with his voice taking time to pull out and put on a page, Wren flowed almost immediately. He’s scared, he’s anxious, and he’s self-conscious — all things I’m sure no one else has ever felt before. (Feel free to take a moment and sense the sarcasm in that last sentence, in case you missed it the first time.)


Of course, Wren has many good qualities. He’s blisteringly sarcastic and defensive but he’s fiercely loyal and he loves making quips at his friends. He might argue on a regular basis with his siblings, but that doesn’t stop him from appreciating them too — though he might not appreciate them very much when they’re all arguing in the back seat of his dad’s car.

This isn’t to say that Wren is all sunshine and candy. He’s got his moments — rightly so, considering he was ostracized from his friends once he came out and he struggles with depression and dysphoria — but Felipe sees the good in him and I bet the audience will too.

At its core, In The Desert is a book about acceptance — both outward and inward. As nice as it is to have someone around you validate you, at the end of the day you need to be able to support yourself. For Felipe and Wren, the issues are similar but not exact. Felipe’s family is fairly traditional Catholic — he goes to Mass every Sunday, crosses himself regularly, and counts his Hail Marys — while Wren’s family is still adjusting to him coming out as trans even though it’s been a year. Neither Felipe nor Wren feel like they have the support they want and they both lack the kind of close friendship that they need.

Wren is looking for that support, ideally in the form of close friends, and that’s what drives him to go to his first Boy Scout meeting. Even when he doesn’t think he’ll meet anyone, he’s desperate enough to be willing to conquer his fear and go with his younger brother. And while he does meet some great people who end up being close friends with him, Wren couldn’t have imagined meeting someone like Felipe… nor could he have imagined what comes next.

In The Desert is a romance novella featuring Wren and Felipe. Grab it as an ebook and thanks for reading.

Elliot Joyce is a social-media obsessed, selfie-taking millennial and he’s proud of it. He can usually be found in his room playing D&D or in a theater lurking on the catwalks. Sometimes he even writes.

Other notable facts include the fact that he’s bisexual, he cannot juggle, and he regularly trips over thin air. Catch him on tumblr or really any social media, he spends enough time on it.