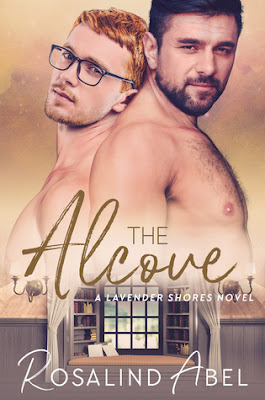 
Jasper Getty is living his dream as the owner of the charming bookshop, Lavender Pages. For seven years, he’s enjoyed the safety and freedom to be himself, selling books by day and curling up and getting lost in novels by night. But a dark page from the past comes back to haunt Jasper as his ex begins stalking him.

Russell Wallace hit reset on his life in Nashville and became a bodyguard after decades of living according to family expectations. But even years later, he doesn’t believe he deserves happiness. When Russell is asked to travel to the beautiful seaside town of Lavender Shores to protect a friend’s brother, he expects nothing more than a job and a paycheck.

But Lavender Shores reveals a world Russell never imagined, and his immediate attraction to the adorably geeky Jasper complicates an already difficult job. Jolted by the memory of a shared moment and paths that crossed years ago intensifies the sparks into a bonfire of passion and hope.

When danger comes pounding at the door, Jasper is in danger of losing his life… and his heart.

- Two imperfect, slightly damaged MCs who are perfect together

- SIZZLING, unforgettable one-off in a public bathhouse that is the beginning of a beautiful love story

- Lots of book talk, a shout-out to Lucy Lennox's Made Marian series, and a naughty drunken lingerie show

- A scene at a romance readers' convention that was pure fun

Even though it's been done a a thousand times, I don't really mind the stalking-ex angle. I'm also a big fan of the bodyguard trope and love the idea of Russell trying (and failing!) to resist the sexy readhead who's been haunting his dreams for seven years.

What I could have done without is the amount of cracked-out melodrama that was Jasper's ex, Neal, who in this book is released from jail following a drug-dealing charge (and is the reason Jasper's brother, Harrison, hires a bodyguard). Neal's a fucking lunatic, which fine; what stalker isn't?

But considering Russell's profession (the man was a cop for twenty years!), I could only roll my eyes as time and again both MCs acted like idiots, putting themselves in danger when they knew a psychopath was out there waiting. And the Lavender Shores police ... UGH; so much stupidity.

I get really frustrated with dumb behavior, and I thought there was more of that here than necessary in an effort to crank up the tension.

For the record, this story actually works as a standalone. There is sparse mention of the other MCs, and just one scene is quintessential Lavender Shores (not surprisingly, it involves Robert Kelly drunkenly groping Russell.)

The Alcove delivers tender romance and smokin' hot sex. Following a few scary moments, some violence, and a good dose of hurt/comfort, Russell and Jasper write their own happy ending.