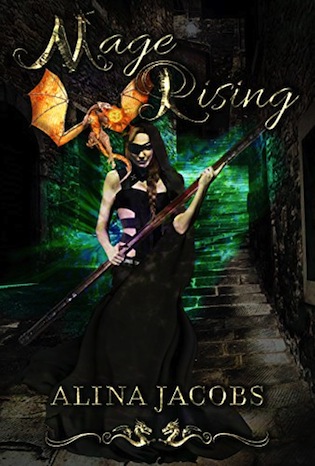 Zsanette of the Wulfila clan has just had her world turned upside down. Her best friend, Misko, was kicked out of the clan, and her mother just told her she’s the Emperor’s daughter. After stealing away in the night, she travels to the capital city to rescue Misko. On the way she is captured to be trained as a Black Tower mage.

Teaming up with friends she meets on the way and a small dragon, Zsanette bounces from one mishap to another as she tries to control her unusual and destructive power of magyk.

As she deals with obnoxious fellow students and races to solve a dangerous mystery, Zsanette finds herself fighting to get past the defenses of the handsome and secretive Garrett Walton, the powerful leader of the mages who fascinates her as much as the enigmatic society of Black Tower mages does.

Garrett slowly raised a hand and gently took the dagger from her.
“It’s me. It’s just me,” he said.
“There was a…a daemon…and it…it tried to kill me… I…” she stammered, trying to explain.
“There’s no such thing as daemons,” he said soothingly, as you would to a child with a bad dream. “Everything is all right.”
“I know what I saw,” she snapped at him, angry at being condescended to.
He ignored her, putting out a hand and petting her hair, repeating, “Everything is all right.”

Zsanette brushed him off and climbed to her feet. Her legs ached, and she felt stiff. Her dragon hopped around, all four legs straight out, spitting acid that landed on the floor in smoking droplets. He had obviously seen the monster.
She tried again to explain. “It was a skeleton; I touched it. It had wings and claws.” She flexed her fingers to mimic the creature.
Garrett stood and stroked the side of her scratched face with the back of his hand letting his magyk heal her wounds. As he did so, he looked into her eyes, searching for something. 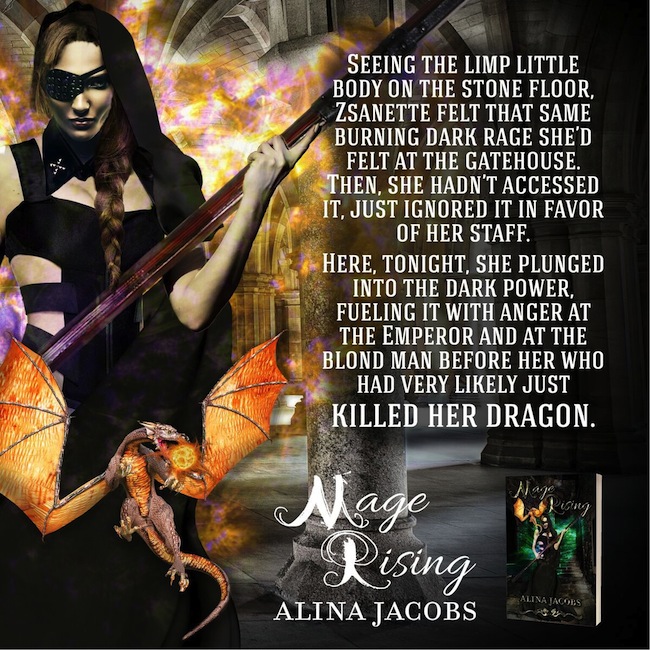 Author Bio:
Alina is an architect by day, writer by night. Her favorite thing to do is curl up with a hot drink and a good book. She lives in a large Southern city in an old house with an old dog.

Alina Jacobs is a pen name.