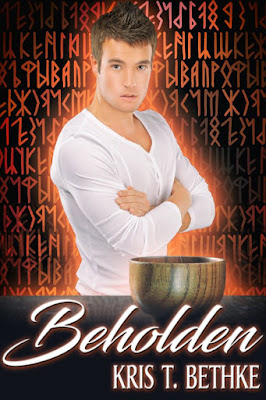 Julian Thomas made the unpopular decision to become Beholden and focus his magic only on scrying. Because of it, he's the best at his job and the top scryer for the Department of Extranormal and Magical Affairs. Which why Investigations Agent Wes Caldwell goes right to Julian for help locating a missing person.

When Wes needs to use his magic to boost Julian's, they find a magical resonance between them that quickly leads to more. Julian doesn't want to move too fast, but Wes knows Julian is it for him. He's fine with waiting, as long as Julian stays close as they work through it.

But then Julian falls ill, and it's clear there's a magical reason. Wes will stop at nothing to find out what's plaguing Julian, and when they realize just how deep the plot goes, they have more questions than answers. Magic is increasing in the world, and no one can figure out why. Julian and Wes have found love, but will it be enough to get them through what's to come? 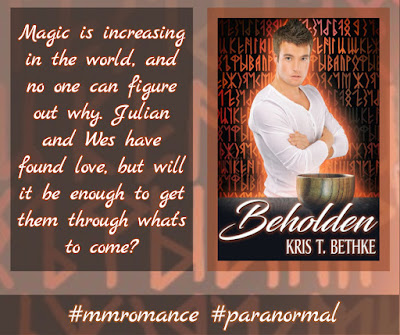 I nodded. Then I sat back a little so I could see his face. I wrapped my arms around his neck, and tucked my fingers down the collar of his dress shirt, not wanting to lose too much contact with his skin. "Yes, thank you."

"First things first," Wes said, his voice all business and his face serious. "Are we bonded?"

I sucked in a breath, surprised he'd made that leap. But he had to know that we weren't. If we'd made a bond, even an unintentional one, he would feel the pull as much as I did. "Of course not."

He just nodded his head, like that was the answer he expected. "But you feel better when you're touching me. When you can pull on my magic to augment your own?"

I released a sigh, and couldn't quite stop myself from snuggling just a tiny bit closer. I shrugged one shoulder. "Yes. Like I said, your magic fits with mine. So it's easy and natural to use you as a source. I'm sorry about that."

He glared at me like I had said something stupid. "Don't be ridiculous. There's nothing to apologize for. It's not like you did it on purpose. Right?"


That last bit was said with just a tiny bit of accusation. I tried not to be offended. "No, I didn't do it on purpose."

Wes just squinted at me. "So then, we have to figure out what's going on with you, what's pulling on your power. Until then, you just need to stick close to me so I can keep you stable."

I gave an indignant huff. "That's hardly practical. We've both got jobs to do. You seriously can't expect us to stay in each other's pockets because I have a little sense of fatigue. You're getting a little extreme there, buddy." I tried to pull away from him but he held me fast, and gave me a look that I couldn't quite interpret.

"You've got someone else that can keep your magic and your energy up?"

"Well, no," I answered honestly. I'd never met anyone whose magic fit so well with mine. "But that doesn't mean you can just drop everything and keep me stable. That thought is just-" I cast about for a suitable word and finally settled on, "preposterous."

Wes just gave a snort, sounding amused. "I can do whatever I want. And I don't want you lying in bed barely able to function. That serves no one. So you'll just have to be 'in my pocket' until we can figure it out and fix you. There has to be some magical means at work here. And I am an Investigations Agent. I'll investigate."

His tone was playful, cajoling, and I wanted to smile, but this was too serious. We barely knew each other and, my crush notwithstanding, he couldn't just drop everything to take care of me. He wasn't making any sense.

Kris T. Bethke has been a voracious reader for pretty much her entire life and has been writing stories for nearly as long. An avid and prolific daydreamer, she always has a story in her head. She spends most of her free time reading, writing, or knitting/crocheting her latest project. Her biggest desire is to find a way to accomplish all three tasks at one time. A classic muscle car will always turn her head, and naps on the weekend are one of her greatest guilty pleasures. She lives in a converted attic with a way too fluffy cat and the voices in her head. She ll tell you she thinks that s a pretty good deal. Kris believes that love is love, no matter the gender of people involved, and that all love deserves to be celebrated.