Hello! So happy to be here to celebrate my upcoming release, Set Ablaze. There’s a hot firefighter, a sexy Broadway dancer, a cute pug puppy and a bit of angst. Below's a tiny taste, hope you enjoy! 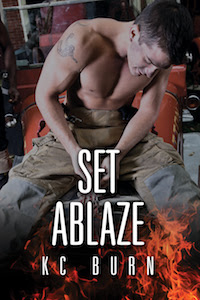 California firefighter Hayden Hurst is starting to realize there’s more to life than fighting fires and drinking with his buddies. He has room in his home and his life for someone special, but no one has stood out among his hookups. And while he’s out at work, admitting he’s gay is very different from showing up at social functions with a man. He’s afraid that’ll be too much for his less-than-accepting “friends.”


Hayden breathed a sigh of relief and bounded out of the truck. Perhaps they should have talked. As it was, nothing had distracted him from Jez’s sugary-sweet smell, which reminded him of oatmeal and apple pie and chai tea. Bodywash? Cologne? Aftershave? He had no idea, but the product had to be full of voodoo and black magic.

What had he done to deserve this? Clearly he’d screwed up big-time in a past life and karma was laughing her ass off at his predicament. If only Jez seemed equally affected, Hayden might not feel so damned idiotic, but Hayden hadn’t caught one salacious glance. Not one.

And if he was honest, it stung his ego.

After walking through the automatic doors, he sucked in a big breath. The grocery store always smelled like a weird combination of earthy vegetation, spoiled milk, and bleach. It was enough to drive the scent of Jez out of his nostrils.

“I got a cart. We might as well share it,” Jez said from behind. Hayden nodded reluctantly. There went his brilliant idea of telling Jez he’d meet him at the register in like twenty minutes. Or half an hour.

Jez smiled at him, and Hayden just couldn’t bring himself to suggest it. The guy knew no one here; Hayden could at least shop with him.

Hayden whipped out his phone. “I start in produce and work to the other side of the store. Where’s your list?”


“Oh good. I like to start in produce too. But I don’t have a list. I like to see what fruits and vegetables look interesting; then I sort of build from there. On the fly.”

Hayden stared, hoping he’d heard wrong. Grocery shopping on the fly. On a Sunday afternoon. Forget karma; he must have died and gone to hell.

An hour later, waiting in an absurdly long line for the cash register, Hayden was forced to conclude two very regrettable things. First, Jez was the sort of shopper who sent Hayden off on curse-laden rants—in his mind, of course. Second, Jez was pretty enough and entertaining enough that Hayden hadn’t minded spending more than double his usual time in the supermarket. And there was even a third thing. His pantry and fridge were soon going to be filled with a number of items Hayden wouldn’t have ever thought to eat, much less purchase.

It had been both charming and terrifyingly domestic.

KC Burn has been writing for as long as she can remember and is a sucker for happy endings (of all kinds). After moving from Toronto to Florida for her husband to take a dream job, she discovered a love of gay romance and fulfilled a dream of her own -- getting published. After a few years of editing web content by day, and neglecting her supportive, understanding hubby and needy cat at night to write stories about men loving men, she was uprooted yet again and now resides in California. Writing is always fun and rewarding, but writing about her guys is the most fun she’s had in a long time, and she hopes you’ll enjoy them as much as she does.