Blogtour: No Tears For Darcy by Vicki Reese

No Tears For Darcy 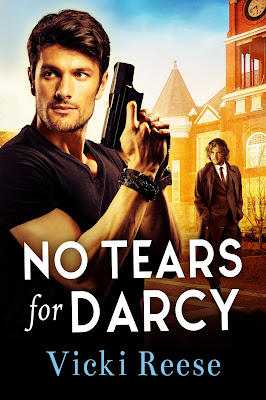 
Letting love pass them by would be a crime.

Former forensic accountant Cameron’s lost nearly everyone he’s ever loved, and now his vintage clothing shop has been broken into and trashed. When town police chief Will Carson asks an out-of-town cop friend of his for help, Cam takes one look at the dark-haired, blue-eyed detective and knows he’s in real trouble—and it has nothing to do with vandalism or murder.

Pete Minchelli is on leave from his job in Philadelphia due to a gunshot wound, but he figures he can help an academy buddy with some light police work. Plus, he’ll have a chance to experience small-town life. He’s tired of the big city and all its corruption. But he quickly discovers that not all the bad stuff happens in cities. What he doesn't expect to find is death, treachery—or love.


The smell of fresh coffee woke Cameron. It took a minute for him to figure out where he was as he shook off sleep. He wrapped the afghan around his shoulders and padded into the kitchen. Darcy was nibbling on a bagel while she read the Sunday paper.
“Hey, he lives!” Darcy pushed half the bagel toward him. “When was the last time you went food shopping, sweetie?”
“I was going to go yesterday after I closed the store, but….” Cameron spread cream cheese on the bagel and took a bite.
“Yeah, but. You okay? I noticed you slept on the sofa.”
“I couldn’t sleep and came out here to drink a cup of cocoa. I guess I finally fell asleep.”
“You needed it. I think I’ll grab a few things and crash here for a few days.”
“You don’t have to do that.” Please don’t let her stay. Cameron couldn’t be cruel and kick her out, but seriously? He really didn’t want company. Well, he did, but not her. He wanted someone of the male variety, with dark hair, sapphire eyes, who could pick herbs out of a taste of a sauce. What else could that tongue do? Cameron’s imagination took flight, then crashed as Darcy slammed the refrigerator door.
“I know I don’t. But I’m going to. So, what do we need to do today?” Darcy asked.
The phone rang, and both of them jumped. Cameron shook his head and picked up the receiver.
“Hello?”
Dead air.
“Hello? Is anyone there?”


Nothing.
Cameron slammed the receiver onto the hook.
Darcy put an arm around Cameron’s shoulder. “That’s it. I’m definitely staying. I wish I had my own place we could go to.”
Cameron barely turned his grimace into a grin for her sake. Darcy had moved in with other friends when she returned to Maple Grove, which was fine with Cameron. He loved Darcy but wasn’t sure he could live with her. Darcy liked loud music, late nights, and wasn’t the neatest person in the world.
Cameron put on his best “we’re friends” face. “Let me get dressed, and we’ll get moving. We can stop at the grocery store on the way to your place. What would you like for dinner?”
“How ’bout that delicious hunk you had in here last night?” Darcy giggled, a sound that grated on Cameron’s nerves.
“I don’t think Costco carries him, but we can check.”
“I’d willingly die just to get him to investigate my murder,” Darcy said.
“Darcy! Don’t even think a thing like that.” Cameron winced. Her sense of humor had gotten harsher over the years, and he wasn’t sure he cared for it. Then he turned away so Darcy couldn’t tell he was thinking exactly the same thing. Okay, not the dead part, but having Pete investigate his body? Now that definitely had some value.

Vicki Reese has been married forever to the one person who accepts that she lives in a fantasy world most of the time. She’s even been seen at the beach building worlds for her stories. In addition to creating suspenseful situations or fantasy worlds, she is very good at boring things like writing procedures manuals and continuity spreadsheets, both of which she actually earned money doing. With a master’s in library science, she likes things organized. Okay, so her family thinks having the spice rack alphabetized is a bit much, but she has no problem finding what she needs when she needs it. And just because her extensive library is catalogued and organized by the Dewey Decimal system doesn’t mean she’s obsessive. Honest!

When not writing, Vicki can be found in the kitchen cooking up gluten free/lactose free/allergy free goodies for her family, or just watching the world go by from her front porch swing.

You can find her online at: