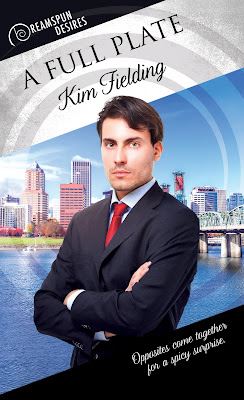 Opposites come together for a spicy surprise.

Bradford “Tully” Tolliver has everything—money, a great car, a beautiful condo, and a promising career as one of Portland’s hottest young lawyers. Sure, he puts in long hours and has no social life to speak of, but who needs romance when corporations pay top dollar for his expertise? He hesitates when a colleague asks if her cousin can live with him, but the arrangement will last less than a year, and then the cousin—Sage Filling—will return to his tiny hometown.

But Sage is handsome and intriguing, and his cooking makes Tully swoon. Sage has obligations back home, though, and Tully has offers he might not refuse from a persistent—and very wealthy—ex. Since Tully and Sage each have a full plate, can they make room for a side of love?

Hi! I’m Kim Fielding, and I’m very excited to announce the arrival of my new Dreamspun Desires book, A Full Plate! If you’re in the mood for a sweet little opposites-attract romance, this may fit your tastes exactly.

My husband has a slight obsession. Actually, he has a couple, but the one I’m going to discuss today helped inspire my new book. You see, he has a thing for Tesla cars. Actually, he admires Elon Musk in general (I had to talk him out of buying a flamethrower), but he’s especially taken with the cars. He’s jealous of my brother and SIL, who own one; he practically swooned with joy when we got to tour the Tesla factory; and he has put down a deposit on the Tesla 3, which at the current rate should be ready in the next century.

In case you’re unfamiliar with the entire concept, Tesla cars are named after a person, Nikola Tesla. He was one of the early pioneers of electricity and was also a really interesting guy—with some extremely controversial views. His only recorded love affair was with a pigeon (which is ironic because pigeons are my husband’s nemeses). Tesla was born in what’s now part of Croatia. I’ve been past his hometown, where there’s a big sign. There’s also a street named after him in Zagreb, with a larger-than-life statue. 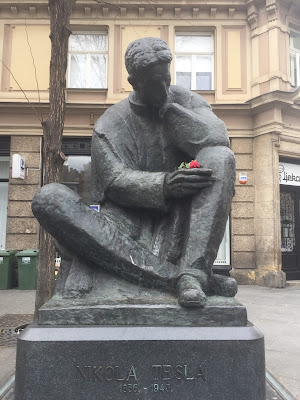 Our cat, Niki, is named after him.

Due to my husband’s obsession and my own travels to Zagreb, I hear a lot about Tesla the man and Tesla the car. They helped spark (pun intended) part of the plot of A Full Plate. See, Tully is being wooed—both romantically and professionally—by a bazillionaire ex-boyfriend who has grand plans of the sort both Tesla and Elon Musk might admire. Tully, however, is far more interested in his erstwhile roommate, a small-town cook named Sage Filling. But there are complications, of course.

What are your thoughts on electric cars? Would you buy a Tesla if you could afford it?

And here’s a recipe I’ve had for years.

Bake cake in 9x13 pan, per box instructions. Right after baking, pierce numerous holes in top of cake with fork. Pour evaporated milk over the top of the cake. Microwave jar of sauce to pouring consistency; pour half onto cake. Cool cake in fridge until caramel is hard. Spread on Cool Whip as frosting. Crush frozen Heath bars and sprinkle on top of cake.