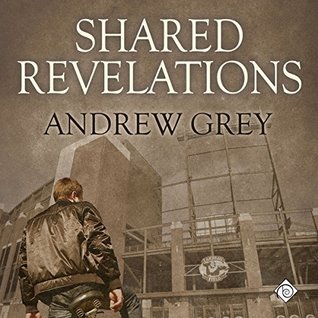 It’s the sixties, but that doesn’t mean it’s easy to be different. Eddie Baronski spent his high school years looking out for his partially deaf friend, Jack Emmons. Now that they’ve graduated, they spend their free time at Green Bay’s newly renamed Lambeau Field, taking in the practices.

When Eddie’s crush, Johnny Grant, a new Packers team member, offers him a ride home, Eddie thinks it’s the start of a grand romance. But Johnny and Eddie may not be on the same page, and love—true love—sometimes comes from an unexpected quarter.

This one left me a little misty eyed...

I first read this story back in 2012 when the e-book was originally released and while I only gave it 3 stars because I do remember it being an enjoyable read...not anything overwhelmingly good or amazing but nice...sweet even. Here I am nearly 6 years later listening to the audio book narrated by J.J. Boyer a new to me narrator, whom I would definitely say held his own on this one because he took this story from 3 stars to 4 for me.

'Shared Revelations' is a story that has it's beginnings in the 60s...a time that was known for hippies and flower power, peace and free love and yet, being gay in the 60s was neither accepted or something that people talked about especially if you played football in the NFL or were a young man working in a factory in Green Bay.

Eddie Baronski and his friends spent as much of their free time as they could at Green Bay's Lambeau Field watching the Packer's practice and for Eddie there was one player in particular that he liked to watch...Johnny Grant.

Eddie's more than a little flattered after practice one night when Johnny offers him a ride home to save him having to walk after his bike develops a flat and he's more than willing to let one night become more as things go from a ride home to dinners at the local drive-in restaurant and drives around town lead to spending time together in quiet places...places where they can be alone. As their relationship grows so do Eddie's feelings...but maybe not Johnny's. As summer comes to an end so do things between the two men, leaving Eddie alone and heartbroken until his friend Jack confronts him.


Eddie's always looked out for Jack who's hearing impaired, defending  him against classmates who would bully and tease him for his disability always patient and kind and more than happy to spend time with Jack...Eddie fails to see what's right in front of his face. So when Jack confronts him Eddie's more than a little surprised by the truths that his friend Jack shares with him.

'Shared Revelations' is both a story about coming of age and coming out, second chances and friends to lovers. At not quite an hour and a half 'Shared Revelations' covers nearly 6 decades from the sixties to the present as seen and experienced by Eddie Baronski as he goes from being a young man barely out of high school to someone in their 70s who ultimately lives live with his best friend and the man he loves. While there was a bit of a time jump to bring us up to the present day at the end it worked for me. I loved the ending it was believable and not a magical happy ever after that made all of their obstacles disappear but more of a happy ending that's earned and deserved by a couple in love who have faced life's challenges together  with love and dignity.  The ending while sweet was lacking in over the top flower descriptives and that made it all the more appealing and heartwarming for me and while I enjoyed reading this story it was listening to the audio book that really touched my heart and left me feeling warm fuzzies and with eyes that were feeling a bit damp.

An audiobook of 'Shared Revelations' was graciously provided by the publisher in exchange for an honest review.