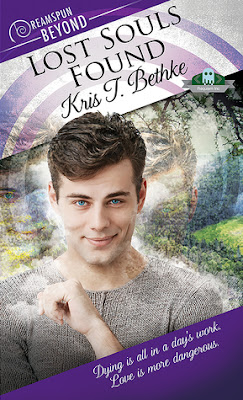 
Dying is all in a day’s work. Love is more dangerous.

Ghostwalker Sam Jones has been half in love with Michael King since he started working at Requiem Inc. But Michael is his boss and a Guardian, to boot. Sam thinks they could make it work anyway, but Michael uses his position and his age to keep Sam at arm’s length.

When Sam continues to volunteer for the most dangerous cases, Michael has to intervene. He tells himself he’s just doing his job, but he’s always seen Sam as more than another operative, and he can’t bear the thought of not taking his chance. The connection between them has been strong from the beginning, and Michael’s telepathy adds unexpected depth and an edge to their new romance, but working together while they try to build their relationship might be the hardest part of their job if they don’t make some sacrifices.

Ghostwalker Sam has been in love with Guardian Michael for a decade. But Michael insists on pushing Sam away. He has reasons: Sam is ten years younger than him; he can't ever bond with Sam; and he's Sam's boss. I liked both Sam and Michael in the first book of the Requiem Inc. series, but there wasn't quite enough tension in Lost Souls Found.

The first half of the book is just Sam and Michael talking round and round the subject of being together. It takes Sam asking for a transfer for Michael to pull his head out of his metaphorical arse. And once he does, the second half of the book is all about Michael getting possessive and figuring out how he can be both Sam's boyfriend and Guardian.

I wanted stronger relationship development on page. Michael and Sam already know each other well. They're already in love, even if Michael is too stubborn to admit it. Once they get together, the sex is hot and plentiful. Thumbs up for that.

Lost Souls Found is an enjoyable read. I just wanted more excitement and more ghostwalking. The creativity of the first book was muffled here. I missed the stories of wondering spirits.

I am still very much looking forward to the third book in the series.