Release Blitz: Don't Look at Me by J.P. Grider

Don’t Look at Me

A diligent hand carved this hole in my face.

It stole my confidence, my identity, and ended my short-lived career as a broadcast journalist.

I am now unemployed. Alone. Ugly.

And expected to get over it and move on.

Go on living life as usual—as if the world doesn’t judge the grotesquely unattractive.

It’s been three years since I was kicked out of the Army for nearly killing the opposition’s militia commander with my bare hands.
I am now unemployed. Alone. Angry.

And expected to forget the nightmares that hold me hostage and move on.
Go on living life as usual—as if the world doesn’t judge a dishonorably discharged ex-soldier.

Don’t Look at Me is a modern-day Beauty and the Beast tale—reversed and twisted. Because even the ugly need a good story, and even the beautiful are ugly deep down.

(I know all too well that transitions are difficult)

When I moved to Jersey from California, I had no idea that days would go by where I wouldn’t think of the incident that led to my being other-than-honorably discharged. For me, the events of that night have been branded into my brain—the consistent nightmares the hot iron that won’t let the scars heal. But since finding out about Haven’s attack, I find myself thinking about her more and more—why was she walking alone in the middle of the night? What was going through her mind when she was so viciously attacked? What is going through her mind now? Was she raped? It isn’t part of the slasher’s modus operandi to sexually assault his attackers, but he also doesn’t carve out whole sections of skin in the faces of his victims. According to reports I’ve read over and over online since learning of Haven’s attack, his approach is to leave two parallel slash marks down the right side of his victims’ cheek. From what I could see in the dark, the heft of Haven’s lacerations are on the left side of her face. It doesn’t make sense. The Stratford Slasher has only attacked each of his victims once, but if Haven’s wounds weren’t inflicted by this same man, could the one that did hurt her return to finish the job? I wish she’d take me up on my offer to help me in the store. Then I could keep an eye on her and make sure that doesn’t happen. But she barely stays on the phone with me for two minutes when I call her to ask. And the only time she’s ever called me was to thank me for the supplies she very much needed during the storm two weeks ago. I know she has a lot to work through since her attack, but I wish she’d let me help her to get through this transition from on-air personality to whatever she needs to do next. Because I know all too well that transitions are difficult. Especially when that transition requires living an entirely different life than before.

With Haven at the forefront of my mind, I can’t help but blurt out a question during one of our group sessions. “How can I help a friend who doesn’t seem to want my help?”


“You don’t,” Warren says at the same time Mary asks, “What kind of help does your friend need?”

“She needs help getting her life back. It was pretty much taken from her when some loser used her face as a canvas to do with as he pleased.”

“Poor girl,” Mary says while the others mumble something similar.

“And now she won’t go out in public. She has her food delivered to her. She only goes out in the middle of the night, wearing a getup she thinks hides her face.”

“Does she trust you to help her, Quest?” Mary leans forward, crossing her hands over her lap. Mary’s name suits her. She’s kind, soft-spoken, and nurturing. The Virgin Mary, my mother would say. The Mother of all mothers.

I answer honestly. “She hasn’t known me long enough.”

“Until she can trust you, I don’t think she’s going to accept your help. Is she getting counseling?”

“It sounds like she could use some professional counseling, but would she be open-minded about giving this group a chance? To get her headed in the right direction?”

My eyes go to the fluorescent lights on the ceiling. “I doubt it.”

“Then, just be her friend. Don’t try to help her overcome this, just be there for her until she finds her way.”

So, that’s what I resolve to do. Be her friend. 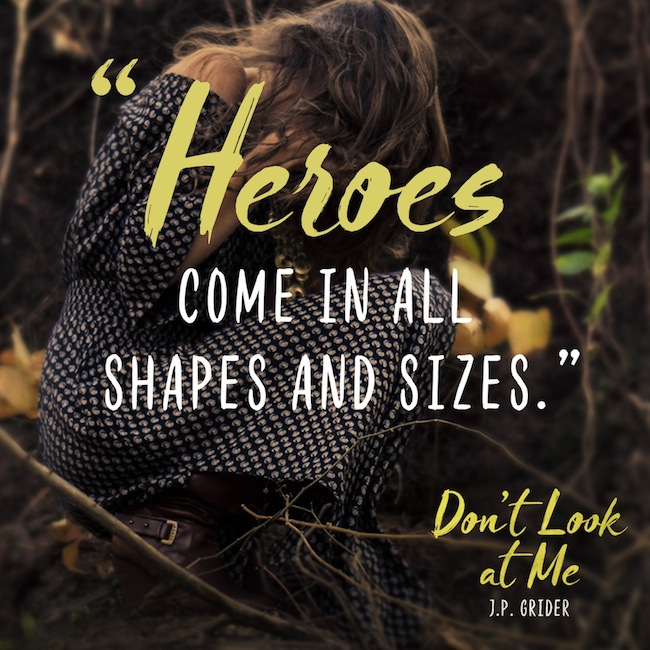 J.P. Grider is a New Adult/Young Adult author who is a sucker for a good love story—whether it's reading one or writing one. And when she's not reading or writing a fairy tale, she's living one with her husband, four children, and her little Auggie Doggie.