Hey y’all! I’m Julia, and My Fiction Nook is being kind enough to let me drop by and share an exclusive excerpt of my new release! It’s out now at Dreamspinner Press, and it’s called The Wolf’s Man Friday! 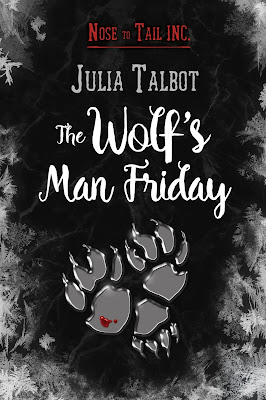 The last thing Sebastian Zeller wants is to be pack Alpha. But when the pack leader, his uncle Ron, is attacked, he has no choice but to leave his beloved Colorado mountains and fulfill his duty as Ron’s heir—at least until his uncle recovers. In the meantime, he intends to lure the attacker out… and make them pay.


“Is there a Coke?” Alan plopped down on the leather couch, manspreading like a champ.
“There so is. Regular, diet, or Dr Pepper, which seems to be an obsession in this state.” Carbonated prune juice. Wahoo.
“Dr Pepper, please. How are you settling in?”
“Remarkably well. I found out who really runs the building and got in good with her.” He grabbed a Dr Pepper out of the fridge hidden in the paneling behind his desk. “This office is like one of Frank Lloyd Wright’s hidey rooms.”
“It’s a decent enough place, I guess. The people are amazing.”
“They are.” He handed over the can as well as one of those wee bags of chips that came in packs of ten. “Doritos?”
“Thanks, man. So, does he have anything else to do today?”
“Nope. He’s out of here. You have plans?” Jaxon knew it was nosy, but God, nights were boring, sitting around listening.
“I don’t know. Guess he’ll say. I want to go do something fun.”
“Where’s the best place you’ve found for that?”
“The West End. Tons of nightlife and restaurants.”
Jaxon nodded slowly. “That sounds fun.”
“Yeah. Yeah, it does.” Alan’s head tilted, the wolf’s nostrils flaring. “You don’t approve?”
“Of what?” Jaxon frowned. “What did I do?”
“You seem….” Alan sniffed again. “Worried? Upset? What do I smell?”
“Probably worried.” Shit, Alan was way more wolfy than Sebastian. “I mean, with what happened to Ron….”
“We can take care of ourselves. No worries.”
“Oh, I’m sure. I just…. Well, I worry. I like the boss already.” He offered a look he hoped was awkward but sweet.
“Seb’s a good guy. So, are you attached to the Dallas office? I imagine I’ll be working down here awhile.”
“No.” Now he went for rueful, and Jaxon knew he was good at that one. “Ron hired me to help take the load off Sebastian.”
“Huh. So you’re here to keep an eye on him?” Smart puppy.
“I’m a good personal assistant. I went to butler school in England as well.” He was curious to see if Alan was familiar with the idea.
“No shit?”


“Yes.” Okay, so Alan got it. Butlers these days had to be jacks of all trades. They had to know how to keep a house, be a personal assistant, and be a bodyguard.
“Very cool. You can cover my ass.”
Yeah, he didn’t think so. “Quid quo pro. Bring me along for dinner. I’m craving spaghetti.”
“Seb loves noodles. I’m in.”
“I think there’s a Spaghetti Warehouse where you said you like to go. I’ll call and make reservations?” He liked Alan. Jaxon hadn’t expected to, but he did.
“Works for me. I’m going to end up flying home tomorrow, so a nice night tonight’s just the thing.”
“Oh, man. You like to travel?” He got it. He was all over the place all the time.
“I’d better. Ron’s got me doing it.”
“Yeah. Whether you want to or not.” He chuckled. “You’re better suited to it than him.” Jaxon nodded to the inner office.
“Fuck yeah. Seb’s a homebody.” Alan grinned, the look wicked as hell. “He has a great place to winter, though.”
A sudden, sharp pang of longing went through Jaxon. Oh, he wanted a den for the winter. Someplace safe and warm, full of pillows and big beds. “I bet. He loves it up there, I can tell.”
“He does. Soon, I think.”
“Yeah?” Jaxon was nodding again, though. “Something is coming.”
“Snow. He wants to get up before the snows.”
Jaxon clapped his hands. “I love snow.”
“Freak.” Alan said it without heat. “Go make reservations. He just hung up.”
“Good hearing.” Jaxon trotted to the desk.
“Give us an hour or two to wander.”
“Wander where?” Sebastian came out of the inner office, scowling.
“What’s wrong?”
“They want an in-person, tomorrow. Yuck.”
“Do I need to call the scheduler?” Jaxon reached for the phone.
“Nah, I’ve got a meeting set at 3:00 p.m. You’ll have to come and take notes, Jaxon.”
“I’m with you, boss. Let me call for dinner reservations, and we’re out of here.” He beamed at Sebastian, pleased that he’d taken the initiative.
Even more, he was tickled that Sebastian wasn’t fighting his presence at the meeting. He would keep a watchful eye out and do his secondary job as well. Taking notes.

Thanks so much for reading!
XXOO

"The mountains are calling, and I must go"