Blogtour and ARC Review: Cowboy In The Crosshairs by B.A. Tortuga

Cowboy In The Crosshairs 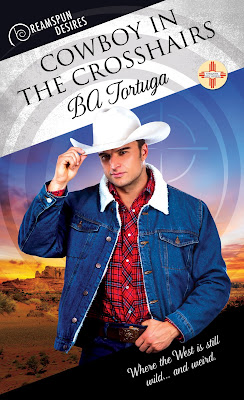 Once upon a time, a prince lived in a magical kingdom called Turquoise, New Mexico.

Well, really, TJ is a small-town police chief. Every Friday he holds court in the diner with the local holy roller, the art colonists, and the horsey people. But the Benes, who own the rodeo company, keep to themselves. TJ knows, because he was once hot and heavy with the oldest Bene son.

When Wacey Bene gets trampled by a remuda and comes home to heal, he’s none too happy to run into TJ, or his two little boys and their momma. The story might end there—if it wasn’t for some pesky bastard trying to kill Wacey.

The law steps in, and the townsfolk are cross about somebody messing with one of their own.

But once the bad guy is put away, can TJ and Wacey make their place in this wild and eccentric town a permanent one?

So, the thing is, Turquoise, New Mexico is a town with three faces: the rodeo school, the horse people, and the art commune.

TJ is the chief of police, father of two boys, and is madly in love with Wacey Bene, the prince of the rodeo company who’s come back to town…

Once upon a time, i.e. 10 years or so prior, Wacey, oldest son of the local rodeo company, and TJ were a couple in secret. TJ wasn't ready to come out as gay in their small town and also wanted what everyone else had - a wife and a couple of kids. They broke up and Wacey left town right after, hurt and angry, and they haven't spoken since. TJ married, had two kids, and then came clean to his now ex-wife about how he likes men more so than women.


That's the backstory of their relationship. I just love the second chance at love stories, so this one was right up my alley. I also love when the romance isn't all dramatic and full of angst, and I got that here too.

The story begins with TJ, sitting in the diner, doing his Chief of Police thing with the locals, including calming down some old biddie complaining about some art work on the side of house, when he's told that Wacey got hurt real bad and is coming home to the ranch to recuperate. TJ is still mad at Wacey for not coming home for so long, and Wacey wants nothing to do with his old boyfriend.

Obviously that doesn't last for long, as weird things happening at the Bene ranch keeps throwing them into each other's path.

Someone apparently has it out for Wacey.

I just love me some good cowboy loving, and this author always delivers the goods. This was such a charming romance, and I adored both MCs. Their relationship was easy-peasy, and once TJ made up his mind to woo Wacey into his bed again, he was relentless in his pursuit.

The mystery/suspense was also really well done, with the incidents getting worse and worse and the suspense building, and nobody having any idea who might be behind it all. I had an inkling about halfway through about the villain, and though I thought that the reason for the villainy might have been a wee bit far-fetched, it's hard to say what might go on in such a mind.

The author's writing style also really worked for this story, and the dialogue felt organic for the setting and the characters.

This is a feel-good second-chance-at-love story with two likable main characters and a great supporting cast. Though, naming your kids Wacey, Lacey, Macey, and Kacey - I feel I must either question your sanity or applaud your sick sense of humor.

Give this a try, y'all. Definitely worth your time.

** I received a free copy of this book from its publisher in exchange for an honest review. **

Texan to the bone and an unrepentant Daddy's Girl, BA Tortuga spends her days with her basset hounds and her beloved wife, texting her sisters, and eating Mexican food. When she's not doing that, she's writing. She spends her days off watching rodeo, knitting and surfing Pinterest in the name of research. BA's personal saviors include her wife, Julia Talbot, her best friend, Sean Michael, and coffee. Lots of coffee. Really good coffee.

Having written everything from fist-fighting rednecks to hard-core cowboys to werewolves, BA does her damnedest to tell the stories of her heart, which was raised in Northeast Texas, but has heard the call of the high desert and lives in the Sandias. With books ranging from hard-hitting GLBT romance, to fiery menages, to the most traditional of love stories, BA refuses to be pigeon-holed by anyone but the voices in her head. Find her on the web at www.batortuga.com.