In this week's post, we'll talk about Murder On The Mountain, as well as Screwups, plus five little-known things about Jamie. All the way at the bottom is also another chance to win one of his books. 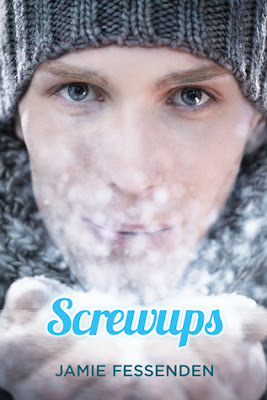 In 1996, Jake Stewart is starting his third year at the University of New Hampshire. Even as a successful business major, he is absolutely miserable. Not only is Jake pursuing a field he hates when he’d rather study art, he is utterly terrified of what will happen if his father finds out he’s gay. When he finally gets up the courage to move into the creative arts dorm on campus, his new roommate, Danny, is openly gay—and there’s no denying the attraction between them.

Danny Sullivan has been out since high school, and he appears comfortable with his sexuality. But something happened in Danny’s past—something that gives him nightmares he refuses to talk about. Unknown to Jake, the way he mistreated his friend, Tom Langois, when Tom came out to him in high school, is mild compared to the way someone very much like Jake treated Danny.

Jake didn’t know how to play piano, but since he had nothing better to do, he sat down in front of the keyboard and started plunking on the keys, trying to see if he could make a chord. His musical talent was severely lacking. But maybe somebody could teach him some basic stuff.
That would be cool.

It was Danny. He was standing in the doorway, leaning in as if to see who was violating the piano so brutally. He was also shirtless—less just about everything, in fact. The only thing he had on was a pair of khaki shorts. He was even barefoot. That seemed odd, considering the fact that it was almost October. But then the dorms tended to keep the temperature up really high.

“I don’t know how to play,” Jake replied, sure his pale, freckled face had gone beet red.

“Yeah, I could tell.” Danny entered the lounge and walked up to him. He was a small guy and not very muscular, but his body was well proportioned and his skin was perfect—the color of milk and honey, and not a blemish or scar to be seen anywhere. As he drew nearer, Jake couldn’t help but notice that the shorts rode awfully low on Danny’s hips… and there wasn’t any underwear waistband showing. Danny looked down at him with an amused expression, those gray eyes peering out from behind unruly bangs. “That’s okay. I can’t draw to save my life.”

“Can you play piano?” Jake asked.

“Can I hear something?” Jake wasn’t sure if he was being obnoxious. Probably the guy was asked that all the time. But Danny just shrugged and said, “If you want.”

Jake slid off the bench and allowed Danny to take his place. The piece he played was beautiful and mesmerizing, delicate one moment and then flowing rapidly along like water the next, rising to a sweeping crescendo and then falling down like rain. Jake felt himself swept up by the music and carried along with it. He didn’t dare say a word to disturb the effect it had on him, even after the music stopped, until Danny set his hands in his lap and said with a shy smile, “Well, that’s the piece I’ve been practicing this week. It still needs work.”

Danny laughed, but it was a warm, friendly sound—not at all mean-spirited or belittling. “Well, you’ll probably be sick to death of it before too long. I practice a lot up here.”

Jake couldn’t imagine ever getting sick of hearing Danny play, but he just smiled and nodded. “I just got the e-mail saying I was accepted into the dorm,” he said.

Danny stood up and said, “Wait ’til you hear the bad news.”

“What’s that?” Jake asked, suddenly anxious that they’d changed their minds about letting him in after all. Had he left his room too soon to get a follow-up e-mail? Sorry, bud. We meant to send that first e-mail to the other dude.

But Danny stuck out his hand, inviting him to shake it, and said, “I’m your new roommate.”

Second in today's line-up, Murder On The Mountain 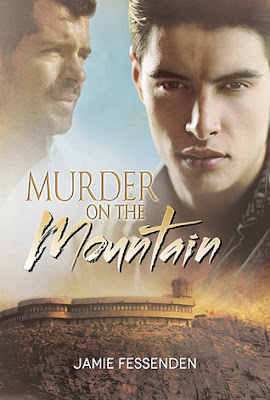 When Jesse Morales, a recent college grad who aspires to be a mystery writer, volunteers to work on the summit of Mt. Washington for a week, he expects to work hard. What he doesn’t expect is to find a corpse in the fog, lying among the rocks, his head crushed. The dead man turns out to be a young tourist named Stuart Warren, who strayed from his friends while visiting the mountain.

Kyle Dubois, a widowed state police detective, is called to the scene in the middle of the night, along with his partner, Wesley Roberts. Kyle and Jesse are instantly drawn to one another, except Jesse’s fascination with murder mysteries makes it difficult for Kyle to take the young man seriously. But Jesse finds a way to make himself invaluable to the detective by checking into the hotel where the victim's friends and family are staying and infiltrating their circle. Soon, he is learning things that could very well solve the case—or get him killed.


THE ROOM Jesse led them to was small, though it had a large, comfortable bed and was still a step above most hotels Kyle could reasonably afford. The clothes Jesse had worn down from the mountain were strewn across the bed, and Kyle had to force his thoughts away from the thought of Jesse stripping out of them just a short time ago.

He closed the door behind them and said, “Okay, spill.”

“You can’t afford this place any more than I can,” Kyle growled. “Oh, sure—you might be wealthy and slumming it on the mountain for a week, but I don’t think so. Or maybe you saved up all summer so you could splurge and relax after spending a week doing dishes.”

Jesse shrugged and sat down on the bed. “Sure. That sounds good.”

“It sounds like bullshit.” There was a chair in the room, but it would have put him in the position of looking up at Jesse, and he didn’t like that. So he stepped closer to the bed and stood over him. “Here’s what I think happened. You got all hot and bothered about someone committing a murder, just like in your detective books, and you decided there was no fucking way you were gonna miss out on that. So you got a hold of some cash somewhere—parents, probably—and booked yourself into the same hotel all the suspects were staying in, hoping to snoop around and solve the case. Am I right?”

“You keep saying I’m ‘hot and bothered’ about things,” Jesse said. “What—do you think I’m some kind of sex fiend?”


I wish, Kyle thought. Then he mentally slapped himself. “Stop changing the subject.”

“Okay, fine.” Jesse looked up at him and that coy little smile crept across his face again. “I’m not doing anything illegal. I’m just hanging out in the hotel.”
“You’re interfering with a police investigation.”

That wiped the smile off Jesse’s face. He frowned and reached up to grab Kyle’s wrist and pull him down toward the bed. “Will you please stop looming over me like you’re interrogating me?”

Kyle was shocked at the touch. Who the fuck did he think he was? He was lucky Kyle hadn’t instinctively whipped him around into a defensive handhold. People just didn’t grab police officers like that! But after just a slight amount of resistance, he gave in and sat down.

“This feels weird,” he muttered.

“Because we’re both on the same level now?”

“That and we’re on a bed!” Kyle snapped. “And don’t you ever grab a cop like that again. You understand? It could get you killed!”

Jesse looked wounded at that. “I thought we were friends.”

“We took a half-hour drive together and had lunch. That makes us acquaintances, by my book—not friends.”

“Fine,” Jesse said, scowling. He flopped down on his back, which put Kyle above him again. Although this new position didn’t make Kyle feel any better, because now it looked like they were on a bed and about to get busy.

This is a challenge, since I spew my life all over Facebook, and everyone knows practically everything about me, but I’ll see what I can come up with.

Jamie Fessenden set out to be a writer in junior high school. He published a couple short pieces in his high school's literary magazine and had another story place in the top 100 in a national contest, but it wasn't until he met his partner, Erich, almost twenty years later, that he began writing again in earnest. With Erich alternately inspiring and goading him, Jamie wrote several screenplays and directed a few of them as micro-budget independent films. He then began writing novels and published his first novella in 2010.

After nine years together, Jamie and Erich have married and purchased a house together in the wilds of Raymond, New Hampshire, where there are no street lights, turkeys and deer wander through their yard, and coyotes serenade them on a nightly basis. Jamie recently left his "day job" as a tech support analyst to be a full-time writer.


Thanks for celebrating with us. Come back next week for more of Jamie's books, a personal story he's chosen to share, and another chance to win.