Audiobook Review: Memories of the Heart by Felice Stevens 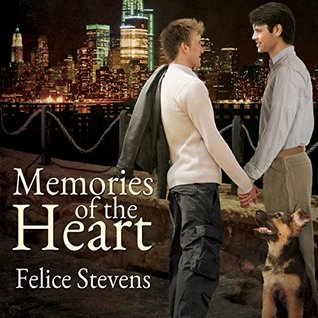 Ruthless, Controlling, A Loner. All words used to describe Dr. Micah Steinberg by the hospital staff for their next head of surgery. When a letter arrives from his grandmother’s friend at the assisted living facility, his orderly world tilts dangerously out of control.

Josh Rosen had everything until it was revealed much of his world was a lie. Forced to re-evaluate his life, Josh gives up his career and returns home to New York City to care for his beloved grandmother. What Josh didn’t figure on was an attraction to a man who on the surface, appears to be exactly like the life Josh chose to leave behind.

As Micah struggles with the reality of his grandmother’s illness, the bond these two share deepens, as Josh helps Micah heal, then open his heart. Micah discovers there is more to life than work, control and success. Josh is in deep but has yet to tell Micah who he really is.

When the fight for the hospital’s head of surgery turns ugly, Josh’s past and present collide. Micah must let go of the past and accept who he is, if his life is going to move forward.

Life is full of surprises, and as both Micah and Josh learn, love can happen whether you plan for it or not.

Sean Crisden saved the day on this one...

I'm getting reviewed out here and truthfully I listened to this one because I felt like it and for no other reason...thank you once again Audible.com Romance Package. So I'm going to try and keep this one short and sweet.

First off there are already some really good reviews out there for this book both for and against so to speak. Truthfully for me the story was maybe 2 or 2.5 stars with the rest of the stars that make up my 3 stars rating being for Sean Crisden and the awesome job that he did on the narration of this one.

I needed the story to be a little tighter...which translates to a bit shorter to get rid of some of what felt like repetitive thoughts/ideas/conversations. I needed Micah to just generally be different...not as whiny, with a more believable transition to being the kind, courteous person that he became.

I needed the 2 hospital administrators who were such huge dicks to just generally not exist because along with just generally being a**holes, they were TSTL!!!


And let's not even discuss Josh's ex and his sister who owned/ran the coffee shop where Josh worked because truthfully I'm not sure which one of these two idiots I liked less and then we have Micah's best friend Alex and Rafe the vet who took care of the dog that Josh found...seriously I probably liked these two characters the most and we saw them the least.

So, quick summary I loved the narration on this because Sean Crisden...he's another fave of mine, the story was good in theory and fell short in execution and book #2 'One Step Further' and #3 'The Greatest Gift' are both centered around Alex and Rafe...so bizarre as it seems because I really liked these two men, I'm probably going to at least give 'One Step Further' a chance to see how it goes and then we'll see if there's a book #3 in my future.