Audio Review Tour: Under The Boardwalk by Felice Stevens 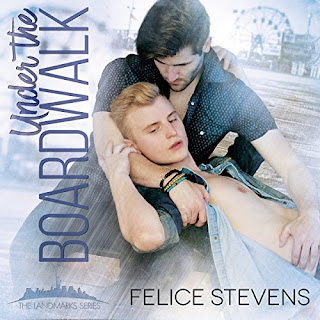 
Beneath the famous Brooklyn landmark, love is hidden but not denied: All his life, Alexi Kharpov has dreamed of traveling to unknown exciting places instead of working at his family’s frozen custard stand on the famous Coney Island boardwalk. Every year is the same until a gorgeous man picks a spot in front of his stand to sing, captivating him with his beautiful voice. After two summers of listening, it might finally be time for him to cross that boardwalk and take a chance.

Opera singer Cameron Maxwell has traveled the world, but the sight of the beautiful man serving custard to tourists touches his heart like nothing ever has before. A summer fling might be exactly what he needs to put his problems out of his mind, but the last thing Cam expects is to want the summer to last forever.
It’s a season of discovery for both men who learn to dig deep within their heads and hearts to decide whether secrets old and new should remain buried, or if love is too important to keep hidden under the boardwalk.

Alexi Kharpov works at his family’s frozen custard stand on Coney Island, but he dreams of travel and a world that he’s never seen until the day he sees a gorgeous man standing in front of his family’s stand sinding like an angel. Than his dreams start to include the beautiful man who’s captivated Alexi’s attention and his heart.
Cameron Maxwell travelled the world as an opera singer and nothing has captivated him like the beautiful young man serving custard.
When Cam starts a summer fling with the attractive young man. Neither of them is counting on their feelings lasting beyond the warmth of the summer sun but when summer ends both men realize that their feelings have gotten stronger and their lives more complicated…
Alexi has been given the chance of a lifetime to travel and live abroad. To see a world, he’s only dreamed about, but can he do this when his heart wants something different and if he doesn’t how badly will he come to regret it and even scarier is Alexi’s desire to live a life that’s true and honest…a life that could cost him his family.
Cam knows that Alexi needs to make the most of what’s been offered to him and he doesn’t want to lose him, but he’s determined not to hold him back and Cam’s got his own issue to deal with the condition that ended his opera career is back and he needs to take care of himself. It’s not going to be easy, but Alexi and Cam need to find a way to follow their dreams and protect their love.
‘Under the Boardwalk’ is one of the sweetest NA, coming out stories that I’ve read in a long time. I loved both Alexi and Cameron. These two were so perfect for each other. At not quite 4 hours of listening time this wasn’t a long story and thankfully the author kept the focus to the relationship between Alexi and Cam. There were other life issues for both Alexi and Cam as individuals and as a couple but none of it ever overwhelmed the romance and was easily woven into the story. Whether it was Alexi’s coming out to his family or Cam dealing with his health issue it was all part of Alexi and Cam’s growing relationship.


I loved the secondary characters in this story from Cam’s parents who were loving and supportive to Alexi’s family which was such a mixed bag…his cousin who at first seemed homophobic but was really more misinformed and uninformed than anything and wanted to be supportive and there for his cousin…so not perfect but none of us are and what mattered most is that he loved his cousin and was willing to change his thinking to be open to the fact that whether Alexi was gay or straight he was still his cousin and still the same cousin that he’d been the day before. Then there was Alexi’s dad…not a total write off but he’s got a ways to go before he earns forgiveness for his behavior and more importantly there’s Alexi’s mom and his babushka (grandmother) these two women were AMAZING!!! Seriously for them alone this story was worthwhile.
And last but not least we have the ending…ok, I loved the ending seriously it worked for me and was definitely what flipped this story from a 3.5, precarious 4 stars to a solid 4 stars and sorry no, I’m not giving away the ending because that would just be wrong.
One of my other favorite things about this one was that it was narrated by Nick J. Russo…yep, still a fave of mine and as always, he did not fail me. I loved his voices but especially Alexi’s and that his accent varied becoming stronger during more emotional times and less noticeable at other times while it could be disconcerting it was also a realistic reflection of what happens when someone whose native tongue isn’t English finds themselves in an environment where they’re speaking English as much or more than their native tongue. I’ve known people who were Scottish, Russian, Australian, Belgium and various other ethnicities and while it doesn’t happen to everyone many of them when we were speaking while they never fully lost their accent if they became really emotional about something whether happy or agitated their accents generally became much stronger and more noticeable so for me Alexi’s accent and how it occasionally varied seemed natural and realistic but it also kept me on my toes as a listener.
‘Under the Boardwalk’ is only my second listening experience with a Felice Stevens novel and while I definitely enjoyed this story more than the previous one, I really can’t find fault with the choice of narrator for either story and I’m looking forward to seeing what else this author has written that I can enjoy on audio and who knows I may even slide an e-book or two onto the reading pile as well.
This was a sweet story about coming out, finding love and having dreams come true…so all in all there’s a lot of good feelz here…definitely recommended.
*************************


An audio book of ‘Under the Boardwalk’ was graciously provided by the author in exchange for an honest review. 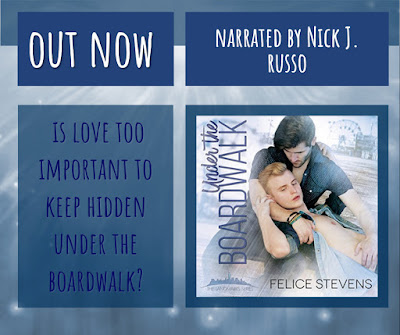 
I have always been a romantic at heart. I believe that while life is tough, there is always a happy ending around the corner, My characters have to work for it, however. Like life in NYC, nothing comes easy and that includes love, but getting there is oh so fun and oh so sexy.

I live in New York City with my husband and two children. My day begins with a lot of caffeine and ends with a glass (or two of red wine). I practice law but daydream of a time when I can sit by a beach somewhere and write beautiful stories of men falling in love. Although there are bound to be a few bumps along the way, a Happily Ever After is always guaranteed.