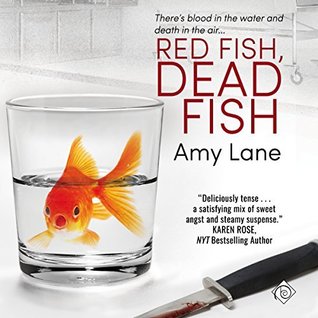 
They must work together to stop a psychopath—and save each other.

I considered trying to write a whole new review for this book but honestly I couldn't think of anything to say that was truly different or better than my original review for 'Red Fish, Dead Fish' other than to say that once again Greg Tremblay did a totally fabulous job of narrating this book giving Jackson and Ellery even more depth and character and making me love this couple even more.

'Red Fish, Dead Fish' is the second book in Amy Lane's 'Fish Out of Water' series and like the first one I was gobsmacked. I loved this book. It was more complex, grittier and the sexy times...well they were sexy and sadly Jackson did not come out of things unscathed.

There's a serial killer on the loose and he's got a specific target in mind...and it's Jackson. He's going after anyone he can who's connected to him, but Jackson's surrounded by a strong group of people who care...people like Jade. She's more than his best friend's sister, she's his friend and she loves him like family, his neighbor and friend, Mike. Lucy Satan or more affectionately known as Ellery's mother and my idol...when I grow up I wanna' be just like her. But most importantly he's got Ellery and Ellery's a shark in the courtroom but out of it he's a man in love willing to use every trick he has at his disposal to save Jackson not just from Owen but from himself...


"That's sweet you think your cat loves anybody as much as he loves you. No. Because once you're out of my life, he's coming after me. Think about it, Jackson. Me, all alone in the house, you not there to protect me--I'd be naked."

Ellery is awesome. He's got his priorities and he understands that this is not just war...against Owen but it a battle for love...his love for Jackson and in his eyes all's fair in both.


And Jackson...Jackson is about as cuddly as a brillo pad and yet he's the one who breaks my heart over and over again...


"Because the duplex isn't mine anymore," Jackson said softly. "And...and if this place isn't home, I don't have anywhere to go."

and then you put these two together and the romance is off the charts, I mean seriously these two take sweet talk to a whole new level...


"Are we going to live?" Ellery asked, acid in his voice.

"Probably not--but I may like you more than anyone else I've ever killed."

Now tell me that just doesn't just melt you into a puddle of goo on the floor. Ok, seriously there are actual words of love spoken between these two and yeah, at times it's different and maybe not quite what you'd expect but it's also sweet and heartbreaking. As determined as Ellery is to make things work between him and Jackson and to make Jackson see how good they are together, Jackson's equally determined that he just doesn't deserve this and that he's not good enough for Ellery...he's just an alley cat that no one's ever really going to want to keep.

Like the first book we're given a story in it's entirety with possible links to what's going to come next but definitely not a cliffhanger. You could easily read this one and stop there if you wanted to but I would however strongly recommend reading the first book to give yourself a better understanding of the connections between a lot of the secondary characters and the MCs. Again not a necessity but potentially the difference between 'it was ok' and 'I loved it'.

I tend to be more a fan of series that have a different couple in every book but when it works and it's done well like it was in Abigail Roux's series 'Cut & Run' or Josh Lanyon's 'Adrien English' and more recently Eden Winters' 'Diversion' or Kate Sherwood's 'Common Law' series, I will happily jump on board for a series with storylines as strong as the men who carry them and while this is only the second book in Amy Lane's 'Fish Out of Water' series it's shaping up to be excellent and for me the only thing that's missing right now is the next book and maybe more Lucy Satan because...damn that woman rocks.  I truly hope that Ms Lane isn't going to keep me  waiting too long before I get to share a new adventure with Jackson and Ellery.

An audio book of 'Red Fish, Dead Fish' was graciously provided by the publisher in exchange for an honest review.