Audio Book Review: Bone to Pick by T. A. Moore 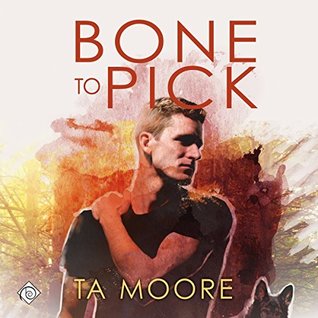 Cloister Witte is a man with a dark past and a cute dog. He’s happy to talk about the dog all day, but after growing up in the shadow of a missing brother, a deadbeat dad, and a criminal stepfather, he’d rather leave the past back in Montana. These days he’s a K-9 officer in the San Diego County Sheriff's Department and pays a tithe to his ghosts by doing what no one was able to do for his brother—find the missing and bring them home.

He’s good at solving difficult mysteries. The dog is even better.

This time the missing person is a ten-year-old boy who walked into the woods in the middle of the night and didn't come back. With the antagonistic help of distractingly handsome FBI agent Javi Merlo, it quickly becomes clear that Drew Hartley didn't run away. He was taken, and the evidence implies he’s not the kidnapper’s first victim. As the search intensifies, old grudges and tragedies are pulled into the light of day. But with each clue they uncover, it looks less and less likely that Drew will be found alive.

"Bone To Pick' is my first time with a story by author T.A. Moore and seriously you can just color me impressed. I have to admit that being new to this author I had no idea what to expect so while I like the familiar as much as the next person...which, I did get that because hey, Michael Fell, narrated this one and he's quickly becoming a fav of mine when it comes to audio book narrators.

But as much as I like the familiar I also welcome the chance to discover something new and what I found here was an author that can deliver a solid mystery/thriller story with a touch of romance? mmm...maybe, not so much romance but definitely a relationship going on here between a couple of the MCs.

Cloister Witte works for the San Diego County Sheriff's Departments K-9 Unit. He's a man who's past haunts him...dad's a deadbeat, stepdad's a criminal and his brother disappeared and was never found and this is the demon that drives Cloister to do for others what no one did for his brother. Cloister and his K-9 partner, Bourneville bring the missing home.

When Drew Hartley goes missing Cloister and Bourneville are brought in to aid in the search and as much as he wants to help being brought in to help F.B.I. agent Javi Merlo is not high on Cloister's list of things he wants to do...but with a child missing both men try to put aside their animosity towards each other...notice I said try...yeah, some things are harder to do than others. While it's readily apparent that the animosity between Cloister and Javi is fueled as much by their attraction as it is by their past encounter.  For me the relationship here is far more physical attraction than any kind of emotional connection. I'm not saying that it doesn't have to potential to become more...just that throughout the course of this story while the physical attraction was definitely there if readers are looking for some kind of grand romance than they're going to be disappointed.

It's definitely the mystery/thriller part of this story that has prominence and takes center stage for most of this story. While I liked Cloister from the word go and of course I liked Bourneville...I mean really how can anyone not like a service dog. These dogs are the heroes of the dog world. Don't get me wrong they're not the only heroes when it comes to our canine companions but you have to admit service dogs are pretty damned amazing and this is also part of the reason why I just couldn't warm up to Javi with his less than informed attitude towards service dogs and what they are capable of...yeah, Javi was often times a self-righteous, condescending, jerk and truthfully my feelings towards him didn't really change but that didn't really seem to impact how much I enjoyed this story.

Like many others I loved Bourne. For the most part I really liked Cloister. He was awesome with Bourne and fairly good with people in general...was he perfect...no, but really who is and for me this just added to making Cloister feel like a real person someone that I could actually meet one day.

As for Javi...well sad to say I can imagine meeting him one day too...oh, wait I think I've already met him a time or two at least and I think this is part of why even though I wasn't a fan of Javi, he didn't spoil the story for me. Along with the good and the bad that was Javi and Cloister there were secondary characters who helped to fill out this story adding to the tension and realism of events.

I admit it I loved this story not because of the 'romance' but more in spite of it. The mystery for me was enjoyable, the character interaction intriguing and the potential for more solid and I'm definitely on board to check out more by this author and last but not least...the narrator...Michael Fell.

I'm not sure what more there is that I can say here about Michael Fell..I could add a whole lot of flowery, gushy words and go on and on about the fact that he's steadily making his way to my top 10 list when it comes to audio book narrators and when I'm looking for an audio book to listen to if he's becoming a narrator who requires little if any consideration as to whether or not I'll enjoy the audio...so, like I said I'm not sure what more I can so except maybe if you enjoy audio books and you haven't listened to anything by Michael Fell...what the hell? How have you managed that and you need to fix it ASAP! and this is as good a book as any to start with if you enjoy a good mystery.

An audio book of 'Bone to Pick' was graciously provided by the publisher in exchange for an honest review.