ARC Review: Ever After by Riley Hart and Christina Lee 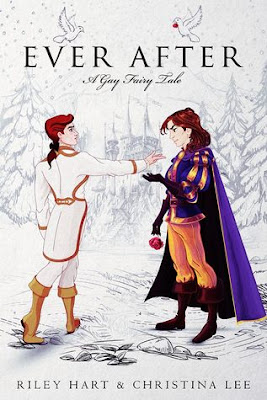 
As next in line for the Evergreen crown, Prince Merrick Davendall’s future involves ruling, marriage, and producing an heir of his own. But he’s long been tormented by desires that are far from princely. Especially when the beautiful Cassius is promoted to be his new valet, and Merrick is struck by a longing like never before—a longing to know him far beyond royal and servant.

After his father’s passing, Cassius Havendale’s sole duty is to provide for his family. A promotion to serve a pampered prince is something he endures only for their sake. Surely Prince Merrick has no understanding of true suffering of the common people, nor could he possibly understand what it’s like to desperately desire something he cannot have.

Except the prince is not at all what Cassius imagined. Kind, humorous, and caring to those in need, he also shares Cassius’ affinity for the arts. In fact, Merrick understands his deepest vulnerabilities in a most remarkable way.

As their affection deepens, the underlying tension between them becomes unbearable and they’re unable to ignore it any longer. But when the queen prepares a lavish ball with all the eligible ladies in the land in attendance, Merrick must fulfill his obligations to his country, and Cassius has the needs of his family to consider. They’ve long known their stolen moments would have to come to an end, but are they ready to give up one another and the idea of a happily-ever-after?

He was like the most beautiful words Cassius could ever write brought to life. He was the greatest story ever told.


Ever After takes place in a fantasy world with kingdoms and castles. There is no magic; phones and television don't exist; and the description of clothing harkens back to the 19th century. But there are cars, trains, and modern plumbing amenities. Sadly, same-sex relationships are frowned upon, particularly for a prince expected to carry on the royal lineage.

So what's a prince to do when he falls in love with his valet?

Ask him to dance but of course.

Nothing else in the world made any bit of sense except this. Merrick and Cas. A prince who had found his own prince.


When Merrick's valet Geoffrey retires, the young footman, Cassius, fills the role. Following his father's death, Cassius works to support his wheelchair-bound mum and two younger sisters. Cas keeps to himself and is not one for gossip. He's jaded and feels disdain for the royal family. The last thing he expects is to find his soul mate among them.

Prince Merrick has always hidden his desire for men. His parents are relentless in pushing him to find a woman to marry and produce an heir. Indeed, his mother plans a ball and invites every eligible young woman in the kingdom hoping Merrick will fall in love.

But Merrick is already in love . . . with his valet.

Ever After has all the elements I adore in a romance novel:

- Well-developed secondary characters: Merrick's sister Marjorie is a true gem, and his parents, while old fashioned, love their son. Cas's family and his friend Valor are nothing if not supportive. I love the close relationship Cas has with his younger sisters.

- Endearing MCs: Gentle and unfailingly kind, Merrick dedicates all his time toward helping children in need. Cas is strong-willed and loyal, and would do anything for his family.

- Charming dialogue: Somewhat formal and archaic, but that's what made it so appealing. Cas calls Merrick Your Highness and later my prince, which made me smile every single time.

"Do you still want me, my prince?"

"I have never wanted another the way I want you."


- Passion and steam aplenty, with a spicy slow burn: Strong attraction brings the men together; they know their love is madness, but they can't stay away.

"If I cannot have more, then I will gladly take one night with you."


- Happily Ever After ending

This book was an absolute JOY to read. It's ROMANTIC! SWEET! SEXY! And definitely one of my top reads of 2018.

Let us read and let us dance.

An ARC of this book was provided by the authors in exchange for an honest review. Download links are provided as a courtesy and do not constitute an endorsement of or affiliation with the book, author, publisher, or website listed.