Review Tour: Wolf And The Holly by Sam Burns

Book #1 - Blackbird In The Reeds - books2read.com/BlackbirdInTheReeds 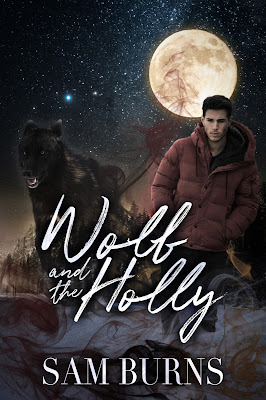 Five years ago, Jesse dropped out of college and came home to Rowan Harbor to find safety with his pack. A broken man, he’s been living as though the world is ending—allergic to responsibility and spending most of his nights at the local bar.

But he can’t avoid growing up forever. On the night of his thirtieth birthday party, he finds his childhood friend Isla unconscious, attacked in the middle of their peaceful hometown. The wolf inside him wants to protect its people from the slick-haired, smooth-talking vampire who’s brought trouble to town, and Jesse can’t run from his instincts any longer.

Now that his inner wolf is out of its cage, it’s picked the most inconvenient moment to find its mate. Sean Anderson—recently back from college and much changed from the skinny preteen Jesse once knew—is just what he never knew he needed.

Trigger Warning: discussion of past abuse.

This novel is intended for adult audiences, and contains swearing and sex.

This is the second of nine books in The Rowan Harbor Cycle, not a standalone. It continues where the first book left off. Jesse and Sean will return in book five to continue their story, so this book contains a HFN, not their HEA.

In this 2nd book in her new series, Sam Burns gives us Jesse Hunter, brother to Wade, childhood friend to Devon, reluctant would-be Alpha wolf, who came back to Rowan Harbor five years ago after dropping out of college for reasons not entirely clear and has been sort of drifting along aimlessly ever since. He's the accountant for many of the business owners in town, still lives with his parents and doesn't want to take his mother's place on the town council.

The night before his 30th birthday, which is where the book opens, we find Jesse in the bar with friends, trying out one of Cassidy's new concoctions and generally feeling a little sorry for himself. The evening is interrupted when a rogue vampire named Sol enters the bar. He's known to both Cassidy and Max and warned immediately to not feed from humans, but register with the bloodbank.

Jesse has a bad feeling about the new vamp - he smells wrong, and Jesse's wolfy nose is still perfectly functional, no matter how much he tries to deny the wolf inside.

As Jesse leaves the bar and walks home, he smells blood in an alley way. Thinking the rogue vamp may have struck, he investigates and find his childhood friend Isla slumped at the end of the alley, unconscious and bleeding from a head wound.

Thus the author has set the scene for what follows, and Jesse can no longer deny his instincts - the wolf wants free to protect his family and friends.

This is billed as a paranormal romance, and there is a romance inside as Jesse finds his mate in Sean Anderson, who recently returned to take over the flower shop in town (a unique place, you'll see). The romance however takes a backseat as the paranormal and suspense parts of the plot unfold.


The whole story is told from Jesse's POV. Sinister forces may be at work, and Jesse must use his wits and overcome his reluctance to figure out what is going on and how to stop it and who's behind it all. I still had questions at the end, and can barely contain my excitement at the prospect of book 3.

Most of the world-building was taken care of in the first book, and these cannot be read as standalones - don't even try. A lot of the background information provided in book 1 is needed to understand the dynamics and the events in this book, and I expect that the subsequent books will be no different. The author calls this a trilogy of trilogies so these must be read in order as well. There is also no HEA for Jesse and Sean in this book, only a HFN, which made sense to me because they have only JUST found each other. I also like very much that while there is a mating pull at work, the couples aren't automatically in love - they still need to learn about each other and forge a relationship.

This book is alternatively edge of your seat intense and giggly fun (such as when Jesse gets zapped by Sean, as I knew he would), but there are also parts that really showcased the author's talent in creating fully fleshed-out characters, who are flawed and complex and don't always have their act together. Jesse's self-doubts, his fears, and the reason he's denied his wolf for so long - there were moments when I wanted to either shake him to pull his head out of his rear end or hug him and tell him that yes, he could become what he was meant to be.

None of these characters are perfect, not Devon whose anger can make buildings shake, nor Wade who can be a bit grumpy, nor Isla who has been running for years for reasons explained within, nor Jesse, the wolf who left to find his place in the world, only to realize that his rightful place is home in Rowan Harbor, doing what he was born to do.

The townsfolk have interesting dynamics. Some made me laugh and some made me think - especially since not all is as it seems at first. So well done.

At the very end, the author cleverly sets up the events to come in book 3 - I cannot wait. Is it March yet?


** I received a free copy of this book as part of this review tour, in exchange for an honest and unbiased review. ** 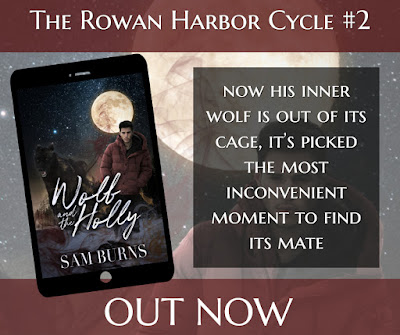