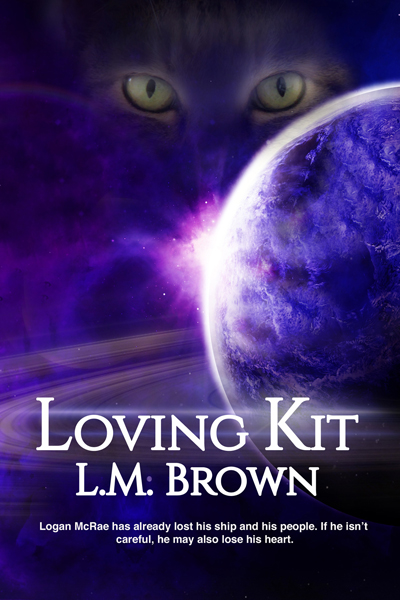 Logan McRae never expected to see two aliens when he woke from cryogenic sleep. He has lost his ship and his people and he questions whether he has lost his mind. As he gets to know Halor and Kit he realises he might just lose his heart as well.

Logan expected to wake on the spacecraft Mercury, ready to pilot the ship down to New Earth. Instead he comes out of cryogenic stasis to find he is on another ship with two alien beings, neither of whom can understand anything he says. Unfortunately, they are all the help he has if he wants to find his people and resume his journey.

Kit doesn't know what sort of creature he has accidentally purchased, but it is definitely male and isn't so very different from him and his lover, Halor. The language barrier might be a problem, but Kit knows the language of love doesn't always need words.

Prince Halor of the Hawk Clan has always been reluctant to expand his nest beyond himself and Kit, but it is obvious from the start that his feline lover is attracted to their unexpected guest. Halor will do anything to give Kit the happiness he deserves, even invite another man into their bed.

Logan has no idea that Kit isn't quite like other men until their passion results in unexpected consequences. Now he must choose between his mission and the two men who have given him everything he ever wanted, as well as things he never dreamed of.


When Logan stepped out of the cubicle, the cat-man was waiting for him with a clean kilt, similar to the ones worn by them. Logan had never worn such a garment in his life, but it was clear this was the only alternative clothing available if he wanted his flight suit cleaned.
His decision made, his covered himself quickly, though not quickly enough to avoid the frank appraisal of his feline host, whose green eyes lingered just a little too long on his groin.
Logan had taken his share of lovers before leaving Earth, but he couldn't recall ever being looked at quite like that. The feline licked his lips and made no effort to hide his stares.
During his time on the ship, Logan had watched the two lovers touch and kiss almost constantly whenever they were together in a room. He had seen the feline drop to his knees and suck the cock of the bird-man at least once a day. Late at night, when they had disappeared down the hatch, the sounds of their sexual activities echoed throughout the ship. Even if they hadn't given him a show right there on the flight deck, Logan would have to have been blind and deaf not to have figured out their relationship was far more than that of shipmates.
Since he had been seeing far more than was decent, Logan had also noticed that their feline and bird-like features were combined with those of men. Fur and feathers may have replaced hair, their eyes may be those of birds and cats, but there was enough about the two of them to make it clear they were very much men, not so different from himself.
They were actually quite pleasant to look upon. The feline was adorably cute, with a mischievous grin that never failed to bring a smile to Logan's lips. As for the bird, Logan not only admired his elegant beauty, he was in awe of his incredible strength.

Logan shivered at the want he saw in the eyes of the cat-man. He might not understand a word he said or even know his name, but the blatant sexual need in his gaze needed no translation.
The squawk of the bird-man alerted them to his presence. Logan jumped, feeling guilty, despite having done nothing to encourage the cat to stray.
The feline grinned and licked his lips again. He meowed and gestured to Logan's dirty clothing. Logan hoped he was going to get them cleaned, not have them thrown away.
Logan stepped aside so the cat-man could pass him, only for him to run his clawed finger lightly along his chest, sending another wave of shivers down his spine.
As the cat-man passed his lover, the bird-man tapped his arse playfully, causing the feline to swipe at him with his tail. Logan could tell they were merely playing and relaxed a little. As long as the bird-man didn't think he was trying to steal away his lover, things should be okay.
The feline vanished from sight and Logan stepped towards the door. That was when he realised the cat-man wasn't the only one who apparently admired his human body. The bird-man halted his progress with a hand on his chest, which turned into a soft caress, running over his abdomen and down to the front of his kilt.
Logan couldn't have stopped his body reacting if his life had depended on it.

L.M. Brown is an English writer of gay romances. She believes that there is nothing hotter or sweeter than two men in love with each other… unless it is three. When L.M. Brown isn't bribing her fur babies for control of the laptop, she can usually be found with her nose in a book.

To win a $10/£10 Amazon gift card please visit my blog and leave a comment on my new release announcement post.

It will start from the 19th February 2018 and run until midnight GMT on 3rd March with the winner being chosen on Sunday 4th March 2018.