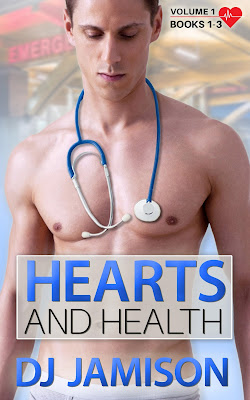 Three full-length novels in a m/m romance series have been boxed up for one price! Sexy nurses with trust issues, overconfident doctors coping with reality checks, and hard-working students come together to find their hearts and health in small-town Kansas. 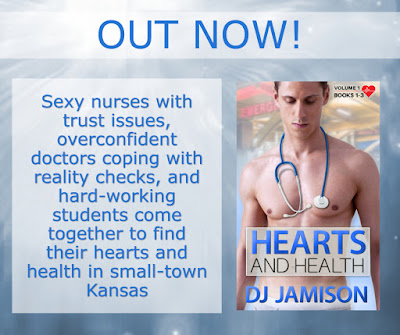 The man had done a real number on himself. Angry scrapes covered his leg, and he was going to need sutures in two places. But everything looked clean and disinfected, so he reattached the bandage and slid the sheet up.

A smile tugged at his lips when, in the process, he glimpsed tight orange briefs under Gage’s hospital gown. Interesting underwear choice. This guy has a bit of flair.

“Is the leg your only damage?”

Gage chuckled, and Ben’s eyes shot up to his face. His lips smirked as he replied. “That’s debatable. What kind of damage are we talking: mental, emotional or physical?”

Ben laughed. “I only deal with the physical, honey.”

Gage’s smile widened, and Ben realized how that sounded. He hurried to get the conversation back on track. Flirting with patients was not ordinarily something he did, and he especially didn’t need to flirt with a biker. Despite what he’d said to Tripp, he was in no hurry to be another guy’s fuck buddy until he got bored.

“What I meant was, that jacket is looking abused. Do you have any other injuries?”

Even as he asked, Ben grabbed the chart to skim over the details once more. Not that he didn’t trust the patient, but he wanted to be sure he knew what had been detailed thus far.

“Jacket saved me,” Gage mumbled. “I might have a few bruises.”

Ben tsked. In addition to sutures, Gage was going to need a round of examinations to ensure there were no breaks or internal injuries to his body.

Ben startled, glancing up. “What?”


Ben bit down on his lip hard as images spilled through his mind. Even in a hospital gown covered by a leather jacket, Gage was a good looking man. His chest was firm and his shoulders broad. It was tempting to agree, just to look a little, after the dry spell Ben had experienced since Tripp dumped him.

That would be playing with fire, and he knew it.

Ben shook his head and replaced the chart.

“The doctor will make a more complete examination,” he said. “Let me go hunt down Dr. Johnston. I’ll scold him until he makes you his top priority.”

Ben smiled his polite nurse smile and turned for the door. He needed to get out of that room before he drooled all over his patient.