We are delighted to reveal the cover image for

Ben's love can help Eric find the forgiveness he needs... if Eric can accept it.


Nine years ago Eric Joyce went wolf when his chosen mate broke the bond, and he hasn’t walked on two legs since. Convinced he lost his friends when he ran out on them, he cut himself off from the pack. But a surprising visitor prods him back down the mountain, and he finds himself welcomed warmly.

Ben Arellano grew up in Texas with a human Catholic mother who didn’t understand a thing about wolves—and didn’t try to learn. He spent his whole life being told his wolf was a demon that needed to be exorcised, surrounded by a wolf pack made up of good ole boys who had no tolerance for his Mexican ancestry or his bisexuality. When he’s given the opportunity to relocate to an accepting pack in Pittsburgh, he jumps at the chance.

When Eric and Ben meet for the first time, neither is ready for it. Where Ben expects rejection, Eric is convinced yet another mate will leave, break the bond, and put him through the same hell all over again. Can they get past their reservations and have a happily mated life?


She smelled funny. Or rather, she didn’t smell like anything he recognized. She looked human, but she didn’t smell human, which confused him. And she walked across the forest floor in her bare feet.

He tilted his head as she approached, trying to figure out the puzzle. She wore simple dark pants, a plain tunic-like top, and had a bow slung over her shoulder with a quiver of arrows on her back. Instinct told him, however, he had nothing to fear from her.

She knelt in front of him, her long dark hair spilling over one shoulder, and reached out to brush her fingers over his head. “My poor lost wolf,” she murmured, tilting her head in a mimic of him, considering him. “I understand your pain, but you are not ready to be wolf all the time. You have more to do in your human form, and you need your pack. My wolves aren’t meant to be alone, not like this. It is time—past time—for you to return to your pack and those who love you.”

Even though the soft touch soothed him, he whined quietly, not liking the words. He’d left for a reason. There was nothing for him back there. He’d turned his back on them. They wouldn’t want him now.


Eric. He’d forgotten that name, perhaps deliberately, years ago. He shied away from the reminder of the human side of him, away from the echo of old pain.

“They miss you, more than you know. And there are others now. Others who will understand you in a way you weren’t understood back then.” She laid a hand on his head, and his eyes slid closed.

An image floated into his mind of a house at the edge of a stream, near a waterfall. The scent of someone very familiar joined the image, and Eric whined again. He didn’t want it, that scent, didn’t want to acknowledge he missed it. Didn’t want to think about what he’d been missing.

The image changed to an open field, a red pup leaping at him. It nipped at his ear, knocking him over. He nipped back, growling softly, as he got to his feet to retaliate.

He pushed the image away. That time was gone. He’d forgotten the path back to them, didn’t want to remember how to get there.

She spoke again, more in his head than out loud. “You remember. You’ll find it. You know where that is. Now go, my lost one. And be lost no more.”

Eric opened his eyes. She was gone. He looked around and sniffed the air, but there was no trace of her. He lay down and put his head on his paws, trying to make sense of what had just happened.

But he knew, even if he didn’t want to accept it. He knew what he needed to do. He just didn’t know if he could make himself do it.

“Go,” she whispered in his mind, and with a sigh, Eric stood and made his way hesitantly down the mountain.

Grace Duncan grew up with a wild imagination. She told stories from an early age – many of which got her into trouble. Eventually, she learned to channel that imagination into less troublesome areas, including fanfiction, which is what has led her to writing male/male erotica.

A gypsy in her own right, Grace has lived all over the United States. She has currently set up camp in East Texas with her husband and children – both the human and furry kind. 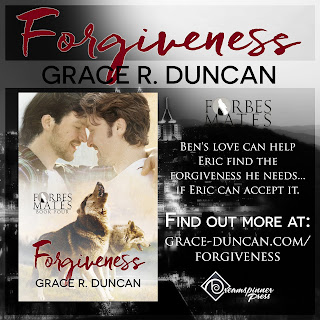 Promotional post. Materials provided by the author.
Posted by Sandra at 12:00 AM