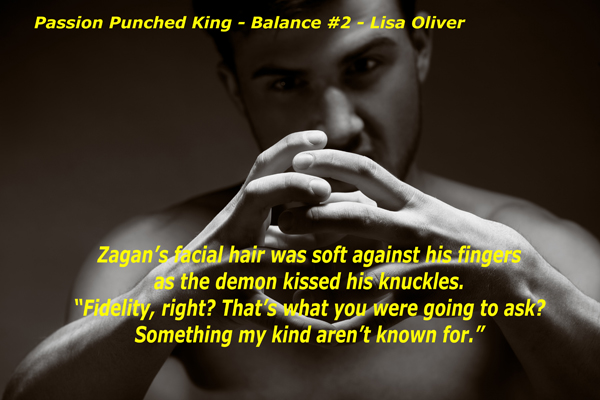 Lisa Oliver has a new MM fantasy book out! King Zagan, Commander of the legions of the damned and one of the higher echelon in the Underworld, never fancied a mate. Demons weren't that way inclined. But when Botis met the Archangel Raziel and their relationship actually worked, Zagan was intrigued. Of course, it wasn't as though he planned on claiming anyone, but tangling in the sheets with a forbidden angel was a vice he could and would enjoy. Or so he thought.

Anael has always considered himself the annoying younger brother of angels like Raziel. As the angel of love, passion and sexuality, he could see love connections that others couldn't. When he saw his connection with Zagan he was so excited. Not only was he part of the big "Mating Scheme" devised by Head Office, but he snagged King Zagan, the secret crush he's had for centuries. Now if only things could go right for them both.

A marriage proposal from Lady Zoltus is just the first sign of trouble for the new couple. When Lucifer sticks his nose in and detains Zagan in the Underworld, leaving Anael to roam earth alone, more secrets are uncovered. After a confrontation Anael starts to question if anything he does is right. Will these two ever find their HEA?


Book Two of the Balance Series: This book is a continuation of the Balance series although it focuses on a new couple. It advisable to have read book one, The Viper's Heart (Raziel's and Botis's story) to gain a sense of context for this one. MM intimate experiences divulged in the pages. Suitable for adult readers only.


Lisa is giving away a $20 Amazon gift certificate via Rafflecopter


"I thought you told me that sweet little angel was totally gaga over me and couldn't wait to jump on my cock." Zagan twirled Botis around and slammed him up against the bathroom wall.


"There is no way I used the word gaga." Botis shook his head and pushed Zagan away although in the small bathroom, that wasn't very far. "That word has never passed my lips before and I'm not sure I'm pleased it has now. I never said he wanted to ride your cock either. He's an angel for fart's sake."


"You know what I mean." Zagan was furious. "You said he was begging to meet me."

"Yeah, so, and he was." Botis shrugged, smoothing his hands down his Hugo Boss jacket. "Clearly, he was infatuated with the stories about you. When he met you in real life…." He waved a hand at Zagan's more casual attire, "Maybe you didn't live up to the hype."

A burst of flame escaped Zagan's nostrils as he snorted. "I earned every bit of my reputation," he snarled.


"And how is any part of that reputation going to put you in the good books with an angel?" Botis smirked at Zagan's glare. Poxy demon was so smug; firmly wrapped around the Archangel Raziel's little finger.


"It might suit you to be an angel's pet snake," Zagan replied, referring to Botis's shifted form. "I just wanted to sample the goods. It's not as though demons get the go ahead to so much as look at angels on the street. I was curious, wondering what all the fuss was about. And then the one angel I get a chance to meet can't be bothered to give me the time of day."


Botis laughed, something else that was new. Zagan realized there were a lot of changes in his normally surly friend. Happiness sat across Botis's broad shoulders like a mantle, and Botis wore it well. Yet, Zagan would be a fool if he thought happiness weakened his friend in any way. Botis ruled his sixty legions with a rod of iron; he just didn't fuck his minions anymore because Raziel didn't like the idea.


"How can you stand it," Zagan twitched as he thought about the sexy cute little angel sitting at the dinner table waiting for them. The man spent all evening bestowing sunshine smiles at the waiters, who were captivated with the little minx. "How can you stand fucking the same person night after night? Don't you get bored?"

"You should try it sometime," Botis patted his shoulder as he opened the bathroom door. "You might be surprised at how enjoyable it can be, especially when it comes to an angel." His laughter was thankfully cut off as the door swung closed behind him. 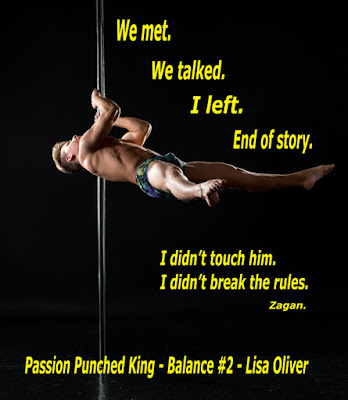 
Lisa Oliver had been writing non-fiction books for years when visions of half dressed, buff men started invading her dreams. Unable to resist the lure of her stories, Lisa decided to switch to fiction books, and now stories about her men clamor to get out from under her fingertips.


Lisa loves to hear from her readers and other writers. You can friend her on Facebook, catch up on what's happening at her blog or email her directly.