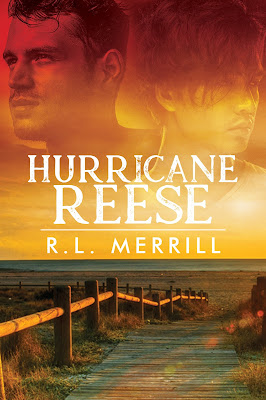 Tony award-winning musician Reese Matheson’s life resembles a natural disaster, and caregiver Jude De La Torre is caught in the eye of the storm. Can the love these two opposites find together survive caring for an ornery octogenarian with wayward balls and a meddling family insistent upon tradition?

A public break-up is not what Reese expects upon returning from the successful run of his musical in London. All he wants to do is spend time with his beloved grandfather and musical mentor, who suffers from Alzheimer’s. Reese knows he doesn’t have much time left before the elder Matheson doesn’t remember him. In classic “Hurricane Reese” form, he moves into the cottage by the sea, displacing Jude, the intriguing caregiver he’d hired two years before. When Grandpa proves too much for Reese to handle on his own, Jude comes to his rescue, taming Grandpa… and the Hurricane as well. Soon all Reese can think about is how to get Jude out of his scrubs and into his bed. Permanently. Will Hurricane Reese destroy everything in its wake, or will this gay odd couple learn to harmonize together?

Thank you so much for supporting my new release Hurricane Reese. This is my first book with Dreamspinner Press after being self-published for three years. I started writing the book for an online course I was taking and immediately saw how special the story was. I imagined this larger-than-life man who’s had great success in his career and is now losing the one thing that is most important to him; his grandfather Thomas Matheson. Grandpa became a central character through his shenanigans and his obsession with his wayward balls. Thomas suffers from Alzheimer’s, and this book was a way for me to ask “what if the one person in your life who knows your entire history no longer remembers you?” Reese is struggling with this very question, and leans on Jude to help him care for his beloved grandfather. Jude, on the other hand, has been taking care of people for years, first as the eldest sibling in a large Filipino family, and then as a live-in caregiver for Thomas Matheson while his grandson was off making music all over the world. He’s come to love the man like his own lolo and hates to see Reese suffer every time his grandfather has an episode.
Here’s an excusive excerpt:

Grandpa hummed to himself as he went about his dressing routine, and Reese beamed. He loved it when Grandpa sang. The times were few and far between these days, but he relished them.
“Hey, Grandpa? How about I take you out back. I’ll play for you, and you can sing. What do you say? I want to pull out some of your sheet music.”
“My grandson wants to write a play about me, did ya know that?”
Reese frowned, but Grandpa continued.
“My grandson is a great musician. Taught him just about everything he knows. Well, the guitar he picked up on his own. I love that boy. He should be back soon from his tour. Did you want to meet him?”
He looked at Reese expectantly, but he didn’t even recognize the man he’d just been heaping praise on.
“Yeah,” Reese said, choking back tears. “I’d like to meet him.”
“Mr. Matheson, Judge Judy is on. Would you like to come back to your chair? I’ve cleaned it up for you.”
Reese turned to find Jude had composed himself. Jude stepped forward and took Grandpa by the elbow and led him out the door. He raised an eyebrow at Reese, but the look wasn’t one of reproach. He genuinely looked sorry for him.
Reese couldn’t get his feet moving. There’d been a couple of times when his grandfather briefly hadn’t recognized him, but he snapped out of it. Today he’d carried on as though Reese weren’t there in front of him.
Were they really out of time? The thought broke his heart. He knew once he placed him in a care facility, their time would be up. He’d read that many of the places discouraged visits from family members as it just disturbed and agitated the Alzheimer’s patients. Reese’s chest felt heavy just thinking about it. He sank to his knees—a fitting metaphor for his situation. He was all alone.

A gentle hand on his shoulder stirred him from the painful memories. Reese looked up into Jude’s comforting gaze. His dark eyes held compassion—something Reese hadn’t felt from anyone in a long time.
“He’s resting in his chair. He sleeps more during the day now.”
Reese couldn’t fight the tears any longer. He rubbed at his eyes and bumped his nose.
“Fuck, that hurts.” He wiped gingerly with the hem of his shirt just as Jude held a tissue out to him.
“Thanks,” Reese said. He hadn’t cried when his parents died, evidence enough that his present situation hurt on a much deeper level.
“You have a little more time, Reese, if that’s what you’re thinking.”
Reese blew out a breath and tried to get his breathing under control, but his chin wouldn’t stop quivering as he spoke.
“He talked about me. To me. As if I weren’t me standing there. Jude, he didn’t recognize me at all.”


Check out the Spotify Playlist here.

Once upon a time... a teacher, tattoo collector, mom, and rock ’n’ roll kinda gal opened up a doc and started purging her demons. Several self-published books and a debut gay romance with Dreamspinner Press later, R.L. Merrill is still striving to find that perfect balance between real life and happily ever after. She writes stories set in the places she loves most, such as Hollywood, New Orleans, Las Vegas, Northern California—and Iowa. Ro also loves connecting with other authors online, at the annual Romantic Times Booklovers Convention, and chapter meetings for the Romance Writers of America, of which she’s been a member since 2014.

A sucker for underdogs, Ro has adopted a wide variety of pets including cats, dogs, rats, a snake and fish. Her love of horror is evident the moment you walk in her door and find yourself surrounded by decorative skulls and quirky artwork from around the world. You can find her lurking on social media where she loves connecting with readers, educating America’s youth, being a mom taxi to two busy kids, in the tattoo chair trying desperately to get that back piece finished, or head banging at a rock show near her home in the San Francisco Bay Area.