Hi! I’m so excited to be reissuing the Bad in Baltimore books with Dreamspinner Press. Bad Boyfriend has been a favorite of readers, and I’m hoping that new readers enjoy the opportunity to meet Quinn and Eli.

Nothing sells me on a book better than reading a good excerpt, and I hope I have one for you here. Quinn is coming off a bad break up (after ten years!) and his friend suggests he bring a young club rat to the ex’s party. Eli turns out to be so much more than Quinn bargained for.

Read the excerpt below for the moment where they meet in a club. 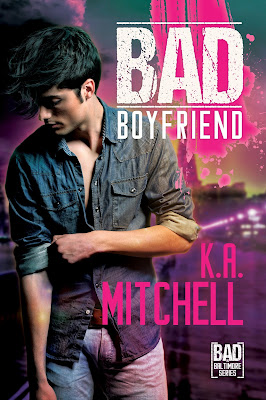 
“I’m Eli. Kellan’s taken. But it’s your lucky day, because I am totally free. Let’s dance.”
The reluctant smile on Quinn’s face made Eli think he’d said something funny at a funeral, but at least Quinn moved when Eli tugged him to a spot where the blue lights in the ceiling showed off his hair and skin. It never hurt to work all the angles.
At first, Quinn kept his distance as much as anyone could in the Friday-night crowd, but then his hands landed on Eli’s hips, one leg sliding forward to let Eli ride a hard thigh. He put his hands on Quinn’s shoulders, stroking the muscles under the soft cotton. All Quinn needed was a neat salt-and-pepper beard to be Eli’s perfect fantasy come to life.
Quinn’s expression changed from pained amusement to a genuine smile, but the kind that made Eli think he was the butt of the joke. Eli could fix that. He slid his hand down the muscle-ridged torso and landed on what he’d already felt rub on his belly. The fat length of Quinn’s dick stretched up to just under the waistband of his jeans. Eli stroked and let the inside of his wrist find the damp head pushing up past the denim.
“Ooo, Daddy,” Eli purred. “Is this all for me?”


Quinn didn’t stop smiling, but he looked like now they were both in on the joke. “Only if you’re a good boy.”
“Oh, I’m always good.”
“Yeah?” Quinn grabbed Eli’s wrist in a bruising grip. “Because I hear you’re nothing but a cock tease.”
“Huh?” Eli tried to pull his wrist back.
“I did a little recon.” The smile vanished. “You strut around like the biggest slut, shaking this ass at everything that moves.” Quinn’s other hand cupped Eli’s ass, grip wide enough to lift him. “But you don’t ever follow through. Couldn’t find anybody who’d actually know if you’re as good as you say.” Quinn let go of Eli’s wrist.
Eli swallowed. For some reason, he wouldn’t be able to simply shrug it off if this guy walked away now. “Maybe everyone you asked wasn’t worth my time.” He put his wrist to his mouth, found the trace of Quinn’s sweat and cock there, and licked it.
Quinn wrapped his arm around Eli’s waist, leg sliding under Eli’s balls. “And?” Quinn stared down at him.
Oh yeah, those eyes were blue. Dark and hard enough to make Eli’s pulse jump. “I think you are.”
“I’m going to need more than ‘I think.’” Quinn cupped Eli’s face, fingers sliding under his hair.
A thick thumb pushed between Eli’s lips, and he ran his tongue over it, around it, stroked it before sucking the taste of Quinn’s skin deep into his mouth.
Quinn’s voice was gravel-rough against Eli’s cheek. “You’d better be ready to back that up, boy.”
“Here?” Eli shoved his hips forward. God, had the man seen a PowerPoint on Eli Wright’s kinks?
“I wouldn’t want you to get your pretty clothes all dirty. Come home with me.”

K.A. loves to hear from her readers. She is often found talking about her imaginary friends on Twitter.