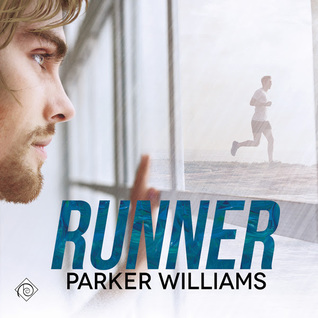 
Matt Bowers’s life ended at sixteen, when a vicious betrayal by someone who he should have been able to trust left him a shell of himself, fighting OCD and PTSD, living in constant fear and always running. When he buys a remote tract of land, he thinks he’s found the perfect place to hide from the world and attempt to establish some peace. For ten years he believes he’s found a measure of comfort, until the day a stranger begins to run on Matt’s road.

He returns every day, an unwelcome intrusion into Matt’s carefully structured life. Matt appeals to the local sheriff, who cannot help him since the jogger is doing nothing wrong. Gradually, after tentatively breaking the ice, Matt begins to accept the man’s presence—

But when the runner doesn’t show up one day, it throws Matt’s world into chaos and he must make the hardest decision of his life.

Well this is a bit of a quandary...

I actually finished listening to this one a couple of days ago and I've been pondering it every since...you see while I did really enjoy the story in general there were a couple of things that have niggled at my brain every since so I'm just going to share my niggles and my thoughts on why I really enjoyed this one and leave you to make your own decisions...

First on my 'niggle' list is Matthew's mother.  I definitely liked that when Matthew was attacked when he needed to be believed about what had happened to him, she was there for him without hesitation. She stuck up for him, made the sheriff take action. I loved this. This is what a parent should be willing to do for their child. But then as time passed and Matt was unable to deal with the trauma on his own things become a little more complex...so, get comfy because it's going to take me a bit to explain my thoughts and feelings on what happened...

As parents we try really had to be there for our kids and no parent ever wants to fail their kids...at least I know I don't but as people we're not perfect and sometimes it happens. Matt needed help that becomes abundantly clear to the reader and while his mother got him to see a therapist it was getting him to continue with therapy where she failed and to a point I get that because like it or not you can't help someone unless they want help and are willing to accept it. Sadly Matt was not...does this mean that his mother should have done what she did, which was to essentially say 'Oh well.' and give up...no. To me it meant that plan 'A' failed and it was time to move on to plan 'B' and if need be then plan 'C'. So I was more than a little frustrated and disappointed that Matt's mom really didn't seem to have or attempt to come up with other options. So essentially on one hand I saw Matt's mom as awesome loving and supportive and then she wasn't.


Ok, my next niggle was Matt's settlement from the school board. I was a little confused by the fact the full sum was placed into trust for Matt and not accessible to him or anyone until he reached the age of 18? Really, I realize that this story is set in a different geographical area than what I live in and laws do vary from place to place but there can also be similarities as well and I know where I'm from when a financial settlement is handed down by the courts it's also accompanied by an explanation of how the amount was arrived at and what percentage was allocated for what reasons. For example there with Matt's case there should have been ?% for general pain & suffering, ?% for medical treatments (things like a therapist) would fall under this amount, etc. Don't get me wrong, I'm not a lawyer or any kind of legal expert. I'm just working with a limited knowledge of the law, some curiosity and a bit of common sense. So this is all conjecture and maybe a bit more attention needed to be given to this aspect of the story...not that I wanted a big long boring explanation here, trust me, I didn't. Ok, I could go on about this even more but let's just suffice it to say this didn't quite work for me.


Now, what I really want to do is to discuss why I liked this story so much. In spite of the fact that the events that caused Matt's PTSD and proved to be the catalyst for his OCD quite honestly seemed to be disproportionate to his response, however, as we all know no two people will necessarily react the same way to the same thing. I'm not meaning to trivialize what happened to Matt, not by a long shot. I think that for Matt it was a combination of the actual event, not receiving professional treatment to help him deal with it...which yes, this is partially a failing of his mom's but like it or not as I said you can't help someone who doesn't want to be helped and Matt made up his mind that he could deal with this on his own and like many others who have read this story I have to question how much of this decision was due to lack of professional intervention and how much of it was simply inevitable.

Ultimately I came to the conclusion that like so many things what's done is done and there's no undoing it...Matt was assaulted and his mother's persistence in getting him the proper help to deal with it fell short of what was needed...so if you can't be a good example than you might as well be a horrible warning and this is what she ended up being...a warning that when all else in the world fails our children as parents we cannot, we may stumble or even fall but we owe it to our children to pick ourselves up and jump back into the fray...we are their last defense in what can sometimes be a cruel and unkind world...unless that world has seen to give us a brother an really, really awesome brother...someone like Clay, I loved Clay not because he always did the right thing but because the things he did were done out of love for his brother...sometimes it's not the action but the actual intent that's truly important and thankfully Matt could see this too. not that he never got mad about some of the things that Clay did and I have to admit I don't blame him but knowing that something was done out of love makes it easier to find it in your heart to forgive a person.

I liked Matt and Charlie. Charlie for me seemed like the perfect match. He was kind, patient, confident and at the same time soft spoken and non-threatening. The kind of person that Matt needed. Their relationship was a bit unconventional in how it developed with much of it being done through the silent communication of Matt watching Charlie as he jogged down his road and slowly integrated himself into Matt's daily routine. While Charlie didn't actively encourage Matt to leave his home neither did he discourage it. He wanted Matt to be comfortable and feel safe and secure in his surroundings and to be honest I think Charlie liked and was comfortable with the idea of living out in country somewhere that was 'off the beaten path' so to speak. It's a thing people actually do this by choice so I had no issue with the fact that Charlie liked the idea of country life or even that Matt chose to live there. In Matt's case the concern wasn't where he chose to live but why.

Ok, one last thing before this review starts to compete with the book for length and that's a word about the narrator...Patrick Zeller. This is a new to me narrator, so obviously I haven't listened to any other books by them but so I'm obviously speaking about their performance on this book specifically and really the only thing I can say is that for me Patrick Zeller nailed this one with total perfection. I absolutely loved the soft quality of the narrators voice and in spite of how heartbreaking this story could be at times the narrator's voice held such a soft and comforting quality that drew the listener into the story and left me feeling like if I just stayed with it to the end everything would be ok.

'Runner' is one of those few stories where I have to wonder if I would have enjoyed reading it nearly as much as I enjoyed listening to the audio book but I don't really think it matters because what really matters to the most is that I enjoyed the story and there will probably be a replay in this stories future.

An audio book of 'Runner' was graciously provided by the publisher in exchange for an honest review.