Audio Book Review: What the Cat Dragged In by B. A. Tortuga 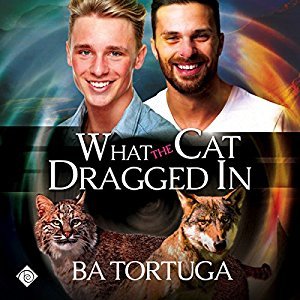 Connor Ragbone finds things. Sometimes it’s gold, sometimes jewels, sometimes people. Set in his hippie ways, he never thought he’d find a pack, but with Sam and Gus and their goofy shifter family, he fits right in. Then he finds Brock.

Shifter Brock Herman is undercover alone, working to break up a poaching ring. The last thing he needs is for Connor to wreck his sting. And now the crazy bobcat just won’t go away!

The poachers lead Brock and Connor on a merry chase all over Western Colorado, looking for shifter bears, but it’s a lost pup who brings them back to Nevada and the pack Sam and Gus are building. That’s when Brock has to decide whether he still travels alone or if Connor and his crazy family are where his heart belongs.

This follow-up to Just Like Cats and Dogs is a feel-good shifter romance novel where cats and dogs prove they can be way more than the enemies nature has made them.

I was fortunate enough to be able to review the first book in this series on audio a few months ago and I really enjoyed it so when I saw the second book was out on audio...well, of course I had to snap that furbaby up, and am I ever glad that I did because once again I enjoyed the hell outta' this.

Gus and Sam are back along with the rest of their pack along with Joe Formichella, who's giving voice to the usual characters along with Connor Ragbone, whom we've already met and Brock Herman, a wolf shifter, who's working undercover to break up a ring of poachers.

Connor's not only a Lynx shifter, he has a talent for not only being able to find things...it seems that Connor's knows when, where and what it is that he needs to find...not really specifics but he often has a strong sense of the generalities enough to get him to where he needs to be.

There's a definite humorous undertone to this book. Just like Gus and Sam, Brock and Connor share their own equally entertaining banter that I thoroughly enjoyed. The voices Joe Formichella lent to these characters all worked well for me but I especially enjoyed his interpretation of Connor Ragbone. For me this voice matched the image of the character that the author had painted so needless to say I adored Connor Ragbone and Brock but Connor became a particular favorite of mine.


Connor and Brock meet for the first time when Connor leaves Gus and Sam's sanctuary where he's been taking a break because he just knows he has something he has to go find. Following his instincts he discovers that along with finding Brock he's got one other thing...person to find and then he's got to get them both to where they belong. Turns out that he's got Brock where he belongs because Brock belongs with Connor and as for the second person well that's the rest of Connor and Brock's adventure and this story.

So what have I learned at the end of all this well a few things...

I decided to listen to this one just for the fun of it and it was a good idea because listening to Connor and Brock as they fell in love and shared an adventure was definitely fun.