Audio Book Review: Off the Beaten Path by Cari Z. 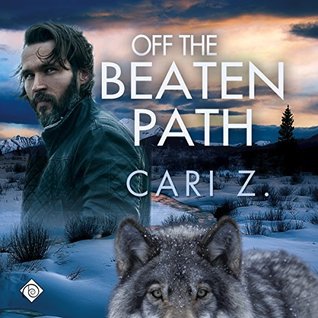 When Ward Johannsen’s little girl Ava shifted into a werewolf, she was taken into custody by the feds and shipped off to the nearest pack, all ties between father and daughter severed. Ward burned every bridge he had discovering her location, and then almost froze to death in the Colorado mountains tracking her new pack down. And that’s just the beginning of his struggle.

Henry Dormer is an alpha werewolf and an elite black ops soldier who failed his last mission. He returns home, hoping for some time to recuperate and help settle the pack’s newest member, a little pup named Ava who can’t shift back to her human form. Instead he meets Ward, who refuses to leave his daughter without a fight. The two men are as different as night and day, but their respect for each other strikes a spark of mutual interest that quickly grows into a flame. They might find something special together—love, passion, and even a family—if they can survive trigger-happy pack guardians, violent werewolf politics, and meddling government agencies that are just as likely to get their alpha soldiers killed as bring them home safely.

Ok so first things first. There are a lot of really wonderful reviews out there for this book and while this wasn't a five star listen for me...seriously that's on me. I wanted to give this one a try because...well, I really like this author and I've danced around this story for a while because...werewolves are just not a favorite of mine but...Cari Z...me likey!!!

There was a lot about this story that worked for me and while it wasn't quite enough to make me totally love this story, it was certainly enough to keep me interested and I enjoyed listening to the audio book.

I loved the world that was created in this story once again it was that little bit different than the typical. So often with paranormal or shifter stories everyone knows about them and they're accepted by some, feared by others or they're this secret that only a few people who have stumbled across them and managed to survive know about and yes both of these scenarios can and do vary in the fine details from author to author but I'm just keeping it simple here or I'd be writing a book of my own and that's not a life goal for me...ssssooooo...not happening...

And back to my original thought which was that I enjoyed the world that was created for this story to occur in. The world knows about werewolves but their strictly monitored and controlled they live in designated areas and are used by the government because of their unique abilities...can we say reservations? concentration camps? Yeah, that's right like it or not this totally plays on things that have happened in the real world and while I don't want to encounter these kinds of reminders in ever book I read sometimes being reminded of what can happen to a group of people when the world at large perceives them as being different isn't a bad thing and in this case it was well done because this story also serves as a reminder that just because something's different doesn't mean we need to fear it or that we have the right to cage it or in this case them.  I know if some one were to try and lock me up just because I didn't meet their concept of normal I'd do my damnedest to be free...it's human nature. Anways, I have soft spot for this kind of story so this was definitely the part of the story that I really enjoyed.


Unfortunately there's another important part of this story and that's the part where Ward Johannsen goes looking for his daughter who has been taken from him because she has the werewolf gene and is going to shift...seriously? You take my kid from me and I'm going after her or in my case him as well and god help you if you try and stand in my way...so, I was totally on board with Ward and definitely cheering for him to find Ava. #teamWard

And then we have Henry...he's the alpha of the werewolf pack that Ava was given to and honestly I felt sorry for him. This guy did not get an easy deal and he's got a lot of internal anger and frustration... justifiably in my mind. But for some reason I just didn't feel the connection between Henry and Ward. I liked that they were both committed to Ava and wanted only what was best for her and I can't say that I didn't like that because I really did. I think I would have felt the connection between Henry and Ward a bit more if there had been more interaction between them...honestly, I'm not sure what wasn't working for me. It's not that I think they shouldn't have been together more like I just didn't quite see the connection as strongly as I would have liked...well, I hope that makes sense because it's my best shot at explaining this, sorry...words sometimes they fail me.

Overall there was a lot of strong potential in this one and as always the author really has crafted an excellent story, it just didn't appeal to me as much as I would have liked but if you're a lover of shifter books I strongly suggest checking this one out. I enjoyed it and I was once again impressed by a new to me narrator, Jack Wesley. I'm going to go guess that Mr. Wesley is new to the world of audio book narrating since when I searched for other books by him this title is the only one that I found so I'll definitely be watching for more by this narrator and Cari Z is still firmly on my list of authors I want to read because truthfully 3.5 stars from me for a werewolf book really isn't too shabby.

An audio book of 'Off the Beaten Path' was graciously provided by the publisher in exchange for an honest review.