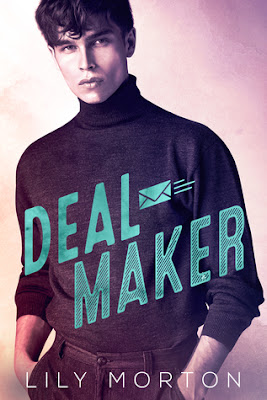 
Sometimes your mouth makes deals that your heart can’t honour.

Jude is a highly successful model, but a very reluctant one. His life is full of casual hook-ups with pretty men in glamorous locations, but it’s still empty. However, circumstances decreed a long time ago that this was his path, so he’s resolutely stayed on it and accepted his fate with good grace. He made a deal with himself and his hook-ups. Get in, get out and no ties with anyone.

However, an accident at home one night leads to him making a new deal and accepting the offer of help from an unlikely source. It leads to an unexpected summer of falling in love with a larger than life man and his child.

But by the end of the summer his reasons for not staying are still valid. Will he turn away? Can he?

Asa is a talented actor who has spent time away from the scene to look after his son. But now he’s back, and the last thing he needs are complications from the gorgeous man who is staying with him. Scarred from too many betrayals, he has no intention of forming a lasting tie with anyone. However, he can’t resist the beautiful man with secrets, and to his horror he develops feelings.

But a deal’s a deal and they said it was just for the summer. What can Asa do with a man who has forever in his eyes and goodbye on his lips?

I didn't read Rule Breaker, a decision I'm regretting since I loved Dylan and Gabe in this book. Dylan's interactions with Jude were hilarious, but then again this is the funniest book I've read in a long, long time.

Seriously, I was giggling like a lunatic, to the point that my dogs were giving me The Mom Is Crazy look. Any book that can make me laugh like that is a WIN, but Deal Maker is more than just humour, snark, and banter (although it has all three in spades!).

The MCs are complex and fully fleshed out. Jude is gorgeous and witty; he loves to read, especially historical romance novels (a man after my own heart!). He's kind and loyal, and gives as good as he gets.

Asa is larger than life. He's a big man: big heart, big personality, big . . . yeah, that too. But Asa's been burned and has an aversion to models, whom he stereotypes as vapid and shallow. Far be it for Jude to prove Asa wrong; oh, no, Jude goes out of his way to prove him RIGHT and becomes the Worst Personal Assistant EVER.

Asa's little boy, Billy, reminded me so much of my 7-year-old son. The hamster debacle! OMG! My kid once "borrowed" two hermit crabs from his classroom, and my reaction pretty much mirrored Asa's: scream first, ask questions later.

(Tell me how you really feel: Those hermit crabs and all their friends could have climbed up Phillip's arse, and I'd happily watch the fucker squirm and cry. That piece of shit douchehole deserved nothing less.)

Often, kids in books annoy me. They either talk like they're 40-year-old philosophy professors far too invested in adult relationships or they're mere props, flitting in and out of scenes on an as-needed basis. But Billy is an absolute gem: loving, smart, and easygoing!

Come to think of it, all the secondary characters in this book are amazing: the cheeky and lovable Peggy, life-of-the-party Amos (every "pressing" thing that came out of Amos's mouth cracked me up), Jude's parents, and the brilliant (or brilliantly stoned) Dean (I can't hate on Dean too much; after all, he's the one who, um, "introduced" Asa and Jude).

This is a charming, ROMANTIC (hello, seaside cottage getaway!), and SEXY (simmering burn that explodes into something passionate & intense) story with an absolutely perfect HEA.

Asa and Jude go from mild enemies to friends to lovers to EVERYTHING. The relationship develops naturally, and Jude's insistence that he doesn't do long-term seems like a hollow protest indeed. He could no more stay away from Asa & Billy than stop breathing.

Oscar-worthy performances by: Jude channeling Joan Rivers during the epic pool incident in Spain, Dean as Dean, and Billy the innkeeper. Bravo!

I loved this story with my whole being. 5 stars aren't nearly enough!