We are thrilled to be hosting Ashley Warren's Survivors' Dawn Blog Tour this month! Sign up to win a free copy by filling out form below. Good luck!

A heroic story of three college women’s fight for justice 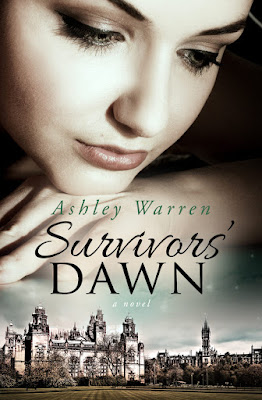 At first glance, Brooke Flanagan, Lauren Le, and Nikki Towers have little in common: a churchgoing virgin, a party girl, and a resident advisor. But they all have their own dreams, dreams that can be shattered in a single night.

When freshman Brooke Flanagan first arrives at the university, she’s excited to escape her sheltered life in a Southern town. Lauren Le, a scholarship student, likes to have a good time, but she never disappoints her hardworking, single mom. Nikki Towers always goes her own way. Confident, poised, and wealthy, Nikki’s biggest problem is what to do with her future.

Into these girls’ lives walks Colin Jordan. Colin is the son of a private equity titan, captain of his club basketball team, and a brilliant pre-law student. He is also a sexual predator.

Survivors’ Dawn relates a journey of heroes: the strength, courage, and determination of the victims as they fight to survive; the obstacles they face in their pursuit of justice; and finally, with its conclusion, hope for a future where students can pursue their dreams without fear of being attacked.

A contemporary novel, Survivor’s Dawn wrestles with issues of privilege, sexual assault, and the responsibility of academic institutions to protect their students.


Why I Wrote a Novel that No One Wants to Read

On a sunny day in early 2010, I sat in my parked car, late for an appointment, stunned by an NPR story about sexual predators. I had no idea criminals such as these roamed freely on university campuses.

Since then, I’ve paid close attention to the issue. It never goes away, and by all accounts, the crime is pervasive at every college. As I heard story after story, I began to wonder if I could write a novel about victims whose lives were brought together by a common assailant.

“Don’t do it,” my freelance editor said. “No one wants to read a story about rape.”

But before putting pen to paper, I researched the market and found that, unlike murder—the inciting incident for thousands of new mysteries every year—only a handful of novels have been written that dealt with sexual assault. Why? I asked a few more people. They held the same opinion as that of my freelance editor.

But just as murder mysteries are not about murder, Survivors’ Dawn is not about rape. Murder mysteries relate the journey of the protagonist as she seeks to solve the crime. Survivors’ Dawn is about the journeys of the victims after the crime: their struggle to survive, the obstacles they face in their pursuit of justice, and their hope for a future when students can pursue their dreams without fear of being attacked.

Brooke Flanagan, Lauren Le, and Nikki Towers are fictitious characters, but their stories are real. Victims face similar fates every day. And predators like Colin Jordan exist too.

To write a credible story about the journey of victims, I had to do a lot of research. When I read about and listened to the stories of college survivors, they broke my heart. But then I realized that the victims are in fact heroes. They suffer tremendous pain and stress, they wrestle with guilt and shame, and if they accuse their assailants, they often encounter indifference and/or victim blaming. They are heroes, and a hero’s story cries out to be told.

I self published Survivors’ Dawn. Initially, I pursued the traditional route to getting published by sending query letters to thirty literary agents. Half responded with form rejection emails, and the rest never answered my query. I don’t know if any of them read the manuscript excerpt. Apparently, the agents didn’t believe they could sell the book to a publisher, and how could I fault their skepticism? After all, no one wants to read a story about rape. But by then, the story had taken ahold of me, and I had to keep pressing forward.

At the point of publication, I sent an advance copy to a friend. Check out his reaction:

“If, say, my sister told me she was giving me a book about some girls that were raped on campus and how they survived, I would have asked her if I could have my fingernails pulled out instead of reading it. Against all odds, you wrote an engaging story. Bravo.”

So, it appears that my freelance editor and the agents were right, at least in the case of my friend. I’ve never much liked a book description that includes the words “a story that had to be told.” And yet here I am. I don’t know whether the story had to be told, but I do know Survivors’ Dawn is an engaging read, and I felt compelled to write it.

College students have been sexually assaulted for as long as colleges have existed. The problem won’t go away by itself, and survivors can’t end the crisis on their own. They need our help. Remember, good women and men outnumber predators many times over. Good people everywhere must stand up and say no more.

Survivors’ Dawn will introduce you to the subject. As you walk with the survivors, you will experience fear, despair, anger, disgust, purpose, redemption, and finally, hope. You might even decide to get involved. A good start would be to take the It’s On Us pledge and make a donation.

Thank you for having me. Book bloggers make the world a better place!

The unending accounts of sexual assault on college campuses compelled me to write Survivors’ Dawn.

My goal in writing the novel was NOT to focus on the act itself, but instead, to write of the victim’s journey, to tell a story about the strength, courage, and determination of survivors, to describe the difficulties they face in their pursuit of justice, and finally, to offer hope for a future where students can pursue their dreams without fear of being attacked.

As Lady Gaga’s “Til It Happens to You” implies, non-victims can never truly know how it feels to be assaulted, but we can try to empathize, and we can try to help. Awareness is key to reducing the incidence of sexual assault on campus. Please do your part by taking the It's On Us pledge and contributing to organizations that are fighting on the front lines.

Thank you to readers who give me encouragement. It means so much to me. Word of mouth is an incredible thing, so thank you also for telling your friends about Survivors' Dawn. 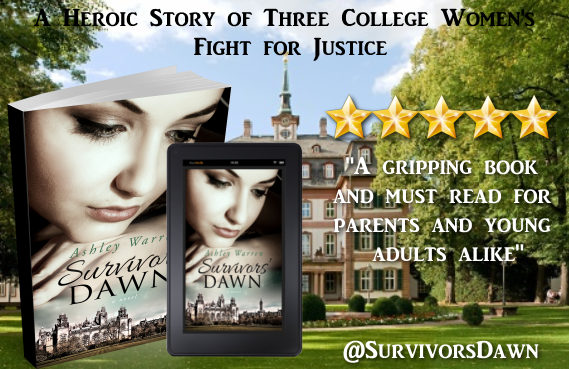 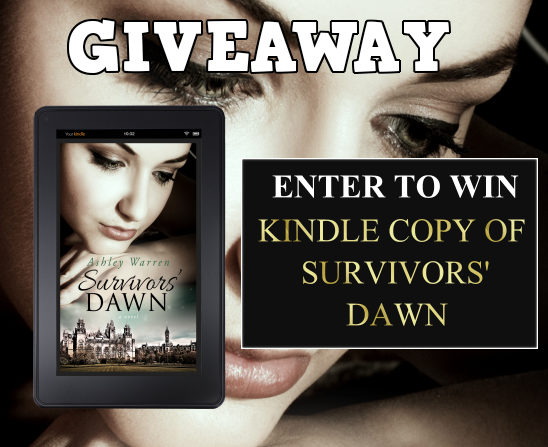 Ashley Warren is giving away a FREE Kindle copy of SURVIVORS' DREAM!