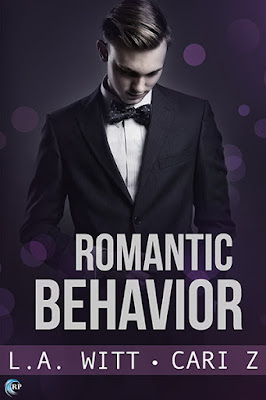 Detective Andreas Ruffner is no fool—he’s found a man who loves him, puts up with him, and has stuck with him through hell and back, and it’s time to put a ring on it. Darren Corliss is the love of his life, and he wants the whole world to know it.

Well, after the not-so-fun part of planning the wedding in between dealing with overbearing and impossible-to-please family members. With future mothers-in-law driving them both up a wall, the guest list growing out of control, and the wedding getting ever more complicated, Darren and Andreas have to wonder if they’re in over their heads.

But they’re going to make it to the altar if it kills them . . . and at this rate, it just might.


It’s “hell no” at first sight for newly partnered detectives Andreas Ruffner and Darren Corliss. Darren is too chipper, Andreas is too gruff, and that whole “IA wants me to prove you’re a dirty cop” thing really doesn’t get them off on the right foot.

A whole bunch of crazy things came together for this series to even exist. A few years ago, Lori ran a contest on her blog asking for submissions from authors who couldn't afford to go to the Romantic Times conference, but who could make a good case for why they were a good pick to sponsor. I wrote an essay, sent it in and hoped for the best. And lo and behold, I won! Lori paid my conference and hotel fees, and all I had to do was get to Vegas.

The conference was career-altering, not just because of the professional connections I made and the benefits of seeing people I'd worked with online face to face, but also because Lori suggested that we write a book together. I was all over that, and we came up with Darren and Andreas and the concept for Risky Behavior. We wrote it, and we loved it, so then we followed it up with Suspicious Behavior. It still wasn't enough, so we followed that up with Reckless Behavior, and had actually planned to end it there before deciding that it was just too damn cruel not to give the guys their Happily Ever After. Thus, Romantic Behavior was born, a cap to the series, the fruit of all their labors.

No, it doesn't have Darren and Andreas in it. But I think you'll like the new guys too. Stay on the lookout for it, we're busy working away!


Connect with Cari at her website  or via her blog.

L.A. Witt is an abnormal M/M romance writer who has finally been released from the purgatorial corn maze of Omaha, Nebraska, and now spends her time on the southwestern coast of Spain. In between wondering how she didn’t lose her mind in Omaha, she explores the country with her husband, several clairvoyant hamsters, and an ever-growing herd of rabid plot bunnies. She also has substantially more time on her hands these days, as she has recruited a small army of mercenaries to search South America for her nemesis, romance author Lauren Gallagher, but don’t tell Lauren. And definitely don’t tell Lori A. Witt or Ann Gallagher. Neither of those twits can keep their mouths shut . . .
L. A.’s backlist is available on her website, and updates (as well as random thoughts and the odd snarky comment) can be found on her blog or on Twitter.

To celebrate the release of Romantic Behavior, one lucky winner will receive a $10 Riptide credit and their choice in an ebook from each of Cari and L.A.’s backlist! Leave a comment with your contact info to enter the contest. Entries close at midnight, Eastern time, on January 20, 2018. Contest is NOT restricted to U.S. entries. Thanks for following the tour, and don’t forget to leave your contact info!