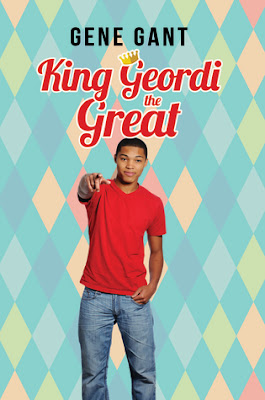 Is there such a thing as caring too much?

Geordi never thought so. He knows he’s lucky to have progressive parents who support him after they discover he’s gay, but when his dad gets overzealous, things go downhill. Geordi’s friend Toff is not only hurt that Geordi hid his sexuality from him—he’s also been in love with Geordi for months. Rather than further damage their relationship, Geordi goes along with a romance he doesn’t feel. When things start to get physical, though, Geordi knows it’s time to be honest with himself and his friends, no matter what the consequences. A tragedy is about to strike, and Geordi, Toff, and their friend Jess will need each other more than ever. For Geordi to find his strength, he’ll have to first find the courage to chart his own course in life—outside the control of his parents or the pressure of his peers.

Welcome to the blogtour for my latest release with Harmony Ink Press, King Geordi the Great. I’d like to share with you an excerpt from a scene in the book that I particularly liked.  As always, your interest is appreciated, and I hope you’ll enjoy this further glimpse into the novel.
Happy New Year and happy reading!

As the sun settled below the horizon and the western sky burned red-orange, I was sitting high in the branches of the big sugar maple tree just beyond the wooden fence at the edge of our backyard. The tree was in the yard of the neighbors who lived directly behind us. I’d been taking refuge in that tree since I was thirteen, whenever I needed privacy from my dad.
The neighbors, Mr. and Mrs. Caple, a retired couple in their seventies, were home. I caught a glimpse of their silhouettes, sitting in front of the TV in their family room, right after I’d climbed into the tree. I was pretty sure they were aware of my periodic trespassing, but they never said anything to me or, as far as I knew, my parents. Maybe they understood that I needed a getaway every now and then.
I watched a jet soaring over the horizon. It was so far away and so high up it looked like a silvery dot skimming lazily along, leaving a cloud-like tendril of white condensation behind it. I wondered what it was like to be the pilot, shut away in a cockpit close to the edge of space with the world turning distantly below you. No one could get to you up there.
Something rustled softly below. The sound grew louder as someone climbed up into the tree. I didn’t bother to look down. Other than the Caples, only two people knew of my hideout, and one of them apparently wasn’t talking to me now.
Jessica pulled herself up and sat on the massive branch across from me, her feet dangling. “Figured you’d be up here,” she said. “Your mom and dad are looking for you.”
“Tell me something I don’t know. They’ve been blowing up my cell phone.”
“It’s kind of rude to duck out of a party when you’re the guest of honor.”
“So shoot me.” I turned to her. “I had to get out of that place. This is probably not gonna make any sense, considering all the people in the house are my family and friends, but I started feeling really lonely in there.”
Jessica nodded. “I’ve felt that way too, when I’m around people who just don’t get me. My brother never gets me.” She pulled a pear from her pocket and bit into it.
“Toff got mad at me and walked out of the party. And before you ask, I didn’t do anything to him. I don’t know why he’s so pissed at me.”
“I do.”
I waited for her to explain, but she just sat there chewing down a mouthful of pear. “Well? You gonna enlighten me or you want me to pay you first?”
“He’s angry because you didn’t tell him you’re into boys. I know because, just before he got in your face, he told me how hurt he felt that you hid something like that from him.”
I grew even more annoyed. “Well, that’s just dumb. I didn’t personally come out to most of the people at that fick-facking party, and none of them got all whiny about it. What’s the big deal? It’s not like Toff was gonna date me or anything if he’d known earlier.”
Jessica chomped another plug out of the pear. “Come on, Geordi. You said you and Toff have been friends since you were seven. That’s a long time, like half our lives. Be honest. If Toff had dyslexia or something but never told you, and you only found out by accident, how would you feel?”

The answer became clear to me instantly. “I’d feel like he didn’t trust me, like maybe our friendship wasn’t as tight as I thought it was.”
“Exactly.”
“Shit. I’m a rotten person.”
“If it helps any, you should know that Toff’s angry with me too. He asked if I knew you were gay, and I told him you came out to me when I was twelve. So he’s pissed that I knew and didn’t tell him.”
“Well, why didn’t you fill him in?”
“I thought that was your story to tell, not mine.”
If only Dad felt that way…. “But Toff must’ve known about me before the party. He helped you get me away from the house, and then he helped you get me back home when I wanted us to hang out and eat pizza.”
“Your parents just told us to get you out of the house so they could set up for a surprise party, and they texted me to make sure we got you back in three hours. Toff and I just assumed it was gonna be a regular party. They didn’t say anything about you coming out. Maybe they thought you’d already told Toff and me since the three of us are so close.” She shrugged. “They were half right, anyway.”
I pulled out my phone and fired off a text to Toff, something I’d already done several times since taking refuge in the tree. Toff never turned off his phone in the summer and, unless he was asleep, he’d always text me back right off. I waited a whole minute, staring at the screen on my phone. “Toff still won’t answer.” I sighed. “Maybe I should go by his house—”
“I wouldn’t do that, not right now,” Jessica said quickly. “Maybe you should just give him some time to cool off.”
“Come on, Jess. He can’t be that pissed over me not coming out to him.”
“It’s not just that. You know things aren’t that good for Toff. Your parents are always making a fuss over you, throwing parties for you, taking you on trips. My mom goes overboard doing stuff for me and my brother. Next month is my quinceañera, and Mom’s making a huge deal out of that. All Toff has is his dad, and his dad barely acknowledges Toff’s alive. I think your parents throwing this surprise coming-out party really got to Toff.”
An ache shot through me, making me even more anxious to go to Toff’s house and patch things up between us. And my general sense of aggravation found a single focus. “This is all my dad’s fault.”
Jess rolled her eyes. “You think every bad thing in the world is your dad’s fault.”
“That’s because every bad thing in the world is my dad’s fault.”

A native of Memphis, Tennessee, Gene Gant started out writing corporate training and policy manuals. He is happily devoting more time to writing fiction now. He spends his free time reading, watching movies, working out and enjoying the company of family and friends.