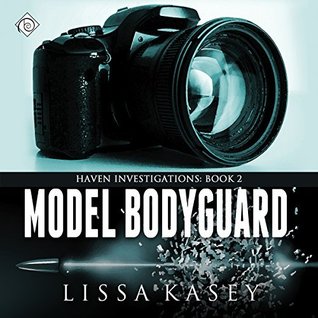 Jacob is a playboy with a serious penchant for kink, slaves, and sex toys. He's also Ollie's ex - and all that implies. With the media exploiting his personal life, a stalker sending blood-soaked "gifts", a bumbling security team, and a family he can't trust as far as he could throw them, Jacob is in desperate need of a bodyguard for his latest tour, and Kade can't refuse.

While Kade deals with new doubts about his partnership with Ollie and struggles with reminders of his war injuries, Jacob's stalker escalates from blackmail and threats to murder. As Kade and Ollie work to keep Jacob safe and find the culprit behind the attack, a web of family secrets, lies, and abuse slowly emerges, leading up to a final confrontation that they might not walk away from - and that will have lasting repercussions for Kade and his relationship with Ollie.

I love it when a series just gets better...

I really enjoyed 'Model Citizen' the firs book in Lissa Kasey's 'Haven Investigations' series this one has definitely stepped things up a notch or two.

While 'Model Citizen' was about Ollie's POV this time around we're given Kade's POV on life with Ollie and I loved it. Kade loves Ollie there's zero doubt about that but he also sees Ollie in a very realistic way which is really, really good for Ollie because Ollie's got some issues that need to dealt with in a realistic way. I just love that I don't feel like Kade views Ollie as a burden to be taken care of. For Kade, Ollie's issues are just a part of Ollie and need to be dealt with in a positive and constructive way which is what Kade does.

Things are going good for Ollie and Kade. As a couple they're on fairly solid ground and the PI business is doing a lot better with the addition of Kade.  Plus the house that Ollie bought for him and Nate to build a family in is getting renovated by Kade as well and even this task shows Kade's love for Ollie with how sensitive he is to how much the house means to Ollie and that there are areas of the house that he knows Ollie's not ready for him to tackle yet because they were meant to be Nate's space and Ollie's still grieving for his brother. He's trying to get on with his life but it's hard and it gets a little harder when questions start arising surrounding Nate's death.

Ironically it's once again Ollie's past that brings a mystery back to their door along with Jacob...Ollie's ex and a definite contributor to Ollie's issues. Nate's a rock star and a playboy he doesn't do relationships just sex and kink but somewhere along the way he's picked up a stalker...one who's decided that he needs to be punished in a permanent way and there's no limit to the suspects in this one. Jacob's whole family is at the top of the list. This is one serious group of users and leeches and getting to the bottom of things and figuring out who wants Jacob punished may be impossible since Jacob's loyalty is pretty extreme in that he feels that his family is above reproach and would never hurt him...did I mention that Jacob might be a little delusional...trust me he is because I wouldn't trust any of them as far as I could throw them.


Kade's got his hands full as he tries to keep contact between Ollie and Jacob to a minimum because honestly interacting with Jacob really isn't in Ollie's best interest and Kade's got his own insecurities where Ollie's ex's are concerned because Ty...who is also an ex of Ollie's seems to be around a lot more as well, thankfully though this is because he's seeing Tomas so his presence is far less stressful and concerning for Kade. Also let's not forget Kade's still dealing with his own physical injuries and a past that doesn't want to let go of him and may not be over yet.

I loved seeing things from Kade's perspective and I really loved how much Ollie and Kade's relationship has strengthened. Kade is so good for Ollie and good to Ollie. I also felt that Ollie was truly beginning to get past his grief from losing his brother Nate and make a real effort to move forward with is life. I loved seeing Ollie as a capable, contributing partner in Haven Investigations and not some damsel in distress who needs constant rescuing.

Kade and Ollie's relationship may be fairly solid but that doesn't mean that having Ollie's sexy rock star ex in their lives isn't going to be a test for them and sadly for the ready because...holy hell!!! did you see the size of that cliff that the author has left us sitting on? It's a biggie and while I know I could pop the next e-book onto my e-reader to find out what happens I've really been enjoying this series on audio. While the first one was narrated by Mike Pohlable this time around we've been treated to the narrations of Brian Hutchison and I've really enjoyed this one. While I liked Ollie's voice in the first book pretty much everyone else except the annoyingly whiny Donovan was just ok and while this is only my second audio book narrated by Brian Hutchison I have to admit that from an audio standpoint I enjoyed this one a bit more.

I'm really enjoying this series on audio and I admit I'm hoping, really, really hoping that the third audio book isn't too far off but in the meantime because I can't wait to see what's going to happen next with Kade and Ollie but until it arrives I'll just be sitting here over on the cliff's edge...you know that really, really steep cliff that Ms Kasey has left me on passing the time with some more audio books or an e-book here and there...who knows I may even have a DTB or 2 lying around to pass the time with.

An audio book of 'Model Bodyguard' was graciously provided by the publisher in exchange for an honest review.