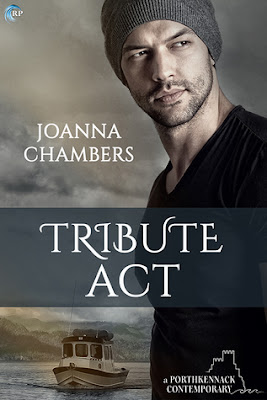 
Nathan Bridges hadn’t intended to settle down in his home town of Porthkennack—he just ended up staying after saving the family business from ruin. The truth is, Nathan can’t stop himself from stepping in when problems arise. He’s a fixer, the man everyone turns to. But even fixers can’t solve everything.

When Nathan’s sister needs an organ transplant, it’s his stepbrother, Mack, who the family turns to as Rosie’s only potential living donor. Nathan’s curiosity about the stepbrother he’s never met turns to shock when he realises that Mack is his latest—and hottest ever—one-night stand.

Nathan and Mack agree to forget their single night together, but that’s easier said than done. When Mack moves in to Nathan’s place to recuperate after surgery, it’s not just the sexual tension between them that keeps growing. Against all the odds, and despite Mack’s wariness of intimacy, the two men grow close enough that Nathan begins to wonder what it would take to mend the rift that’s kept Mack and his father estranged for over a decade . . . and whether Mack might consider staying with Nathan in Porthkennack for good.

I've loved Joanna Chambers' contributions to this series. A Gathering Storm, the second Porthkennack book, was on my Best M/M Romance of 2017 list, and Tribute Act is a strong contender for 2018.

While Nathan, whose POV filters the story, can't keep his eyes off Mack, the estranged stepbrother he's only just met, he's not at all sure how Mack feels about him.

Mack, who is a talented musician, is a bit of a drifter. Restless, independent to a fault, and aloof, Mack shirks touch and avoid messy emotions.

Nathan is a giver, a fixer; he likes to take care of people. He spends his inheritance and quits his London job to come home to Porthkennack and save his failing family business—an ice cream and coffee cafe. Nathan works hard, but sometimes he wishes he had someone to look after him.

Nathan's insecurities about his body (he's gained weight since moving home and has a little belly) made me love him that much more. He's real, relatable, and so damn sweet.

Mack shows up to be a live liver donor to his and Nathan's sister, Rosie, who needs a transplant to survive. Mack comes for Rosie, not for Derek, his father (Mack's step-father) who abandoned him at age 15.

Derek, a once successful pop star, is a piece of work. He's not a villain, far from it, but I wanted to shake him many times over. He's unfair to Mack and unwilling to apologize.

I like the way the story progressed. I'm a sucker for hurt-comfort, and this story has both in spades. Mack is a wounded bird; his physical scars heal quickly, but his heart takes much longer to mend.

Mack and Nathan have amazing chemistry, and the epilogue (from Mack's POV) is just the right touch.

The only reason I'm not going with five stars is that the book hopped and skipped through days and weeks. I wanted it to slow down so I could experience all the small moments between Nathan and Mack.

An ARC of this book was provided by the publisher via NetGalley in exchange for an honest review. Download links are provided as a courtesy and do not constitute an endorsement of or affiliation with the book, author, publisher, or website listed.