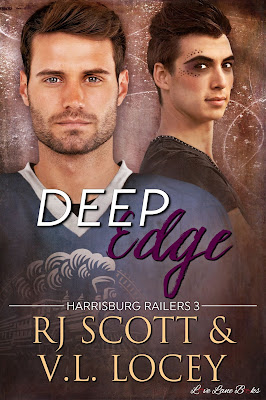 One man’s passion, another man’s lies. Can love fix even the darkest of hearts?

Trent Hanson is a figure skating phenom adored by millions around the world. His whole life has been dedicated to the sport he loves even when the sport - and his own family - have turned against him. From the playground to the Olympics to his parent’s living room, Trent has fought against bullies and homophobes to be the out and proud gay man he is. But the constant fighting has left Trent tired, lonely, and skittish. All those fears will have to be shelved though when he’s hired to spend the summer working with the Harrisburg Railers ice hockey team. Who would have guessed that the man fate has decided to pair him off with is Dieter Lehmann, all-around sex god and a man who seems to have everything to prove and doesn’t care who he hurts to get what he wants.

Dieter has spent too many years languishing in the minors and a secret addiction to prescription painkillers means his career is in a downward spiral. His ex is blackmailing him and he’s close to walking away from it all. But when he’s called up in the run for the Stanley Cup to cover injuries he has a taste of what it’s like playing in the NHL and he realizes that a place on the Railers roster is what he wants more than anything. More than listening to his heart, and even more than caring for the infuriating figure skater who gets under his skin. When he crosses the line to get what he wants, he knows he has lost his way. He has to change, but is it too late for both his career and any chance he might have at love?

‘Deep Edge’ is the third book in the ‘Harrisburg Railer’s’ series by RJ Scott & V.L. Locey and while I have very much enjoyed the first two books, ‘Deep Edge’ has definitely become my favorite book so far.

Trent Hanson may be a skating phenom adored by millions but that hasn’t kept disaster from dogging his heels nor has it kept the two things he loves the most from turning on him. It’s when his family has betrayed him and the sport he’s dedicated his life to has turned on him that Trent finds himself faced with the dilemma of a life time…do a reality show that will pay him enough to resolve the financial difficulties that he’s facing while leaving him in the company of members of the ‘Harrisburg Railers’ while filming a reality television series…Trent doesn’t do jocks…not football, baseball or hockey…ever! But when faced with the alternatives that his current financial state will result in. Trent decides it’s time to put on his big boy pants and do what needs to be done…after all it’s just 6 weeks…he can do this, right?

Dieter has spent years in the minors waiting for his chance to show that he’s got what it takes to play in the pros. When he gets called up during the Railers run for the Stanley Cup, Dieter knows this is his chance and he wants it. He’s determined not to let anything get in his way…not an injured knee that leads him to become addicted to prescription painkillers, not a personal scandal that threatens to splash his name across the cover of every tabloid in North America and certainly not the infuriating figure skater whose gotten under his skin while adding so much color and life to his world.

I loved Trent…he was unrepentantly Trent. His motto in life was ‘name it and claim it’. Trent was out and proud unashamed to show the world the beauty that was Trent Hanson. But for all his sparkle and flash he had a heart of gold. His passion for skating includes his Rainbow arena where he creates a safe environment for LGBTQ kids to take lessons and skate in a safe and bully free environment. He helps take care of his mom and his very feisty grandmother whom he calls Lola. Sadly Trent’s not a stranger to the world of addiction having been in one relationship with someone who was addicted to prescription drugs he recognizes the warning signs in Dieter.


While Dieter was a little harder character to warm up to in the end he won my heart. Initially he wasn’t willing to face the truth’s of his circumstances in the end he faced up to things and got the help he needed for both his addiction and the injury that led to it. What really won me over with Dieter was that when it came to Trent, he wanted Trent as he was. There was never any expectation on Dieter’s part that Trent would change in any way because Dieter wanted the color and flare that Trent brought into his life.

Just like in the first two books we were given a wonderful cast of secondary characters including the MCs from ‘Changing Lines’ and ‘First Season’ and Trent’s mother and his Lola, there’s Trent’s agent who ultimately takes on Dieter as a client as well and Dieter’s parents…I really loved Dieter’s parents they were wonder, loving and supportive parents…even if his dad is a Vancouver Canucks fan…there’s just no accounting for taste…kidding.

I loved Trent and Dieter’s story and as a couple they worked really, really well for me and while I know that the next book’s a new pairing…it’s Stan the big, adorable, teddy bear Russian Goalie for the Railers and I’m totally on board for Stan’s story and yes, I do have my fingers crossed for a peek or two at Trent and Dieter…these two worked hard for their HEA and I’d love to see more of these two.


This series just keeps getting better and better for me and I’m definitely looking forward to whatever comes next for the men of the Harrrisburg Railers and their partners…now, if I could just get my hands on a Railer’s hockey jersey…Go Railers!!!


** A free copy of this book was provided by Signal Boost Promotions as part of the review tour. A positive review was not promised in return. **