Jack: Grime and Punishment by Z. A. Maxfield 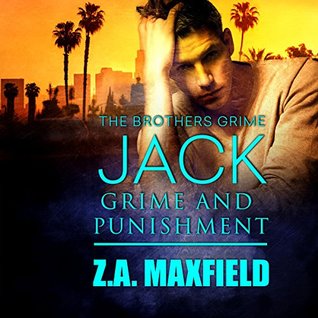 The Brothers Grime is Jack Masterson's way of helping people in crisis after disability ends his career as a firefighter. Jack's people get to a scene long after the physical trauma ends. They don't solve crime or rescue the victims. They help people move on.

The new job is all Jack wants or needs, until he gets the call about old flame Nick Foasberg's suicide. Ryan Halloran's cousin Nick has been on a downhill slide for a long time. Despite that, Ryan does everything he knows to help. Ryan only understands part of what happened between Nick and Jack in high school, but after Nick's suicide, Ryan agrees both he and Jack need closure.

They work together to clean the scene and despite the situation, heat flares between them. Jack is keeping a painful secret and fighting his attraction to Nick's lookalike cousin, Ryan. Ryan calls himself a magnet for lost causes and worries Jack might be the next in a long line of losers. Despite his misgivings, despite the past and the mistakes they've both made, Jack gives Ryan something to look forward to, and Ryan gives Jack a reason to stop looking back, in Grime And Punishment.

It's another swipe at the Tower of TBR thanks to the world of audio books...

I've wanted to read these books for ages now. I'm totally a fan of Z.A. Maxfield and while I haven't read all of her books I'm working on it and I've wanted to read this one for quite a while now. So while I still love to read my books like most things I have come to realize that audio books have a place in my reading routines.

'Jack: Grime and Punishment' is the first book in the series 'The Brother's Grime'. Jack is one of the partners in a company that specializes in crime scene clean up. A company that came into being when Jack's career as a firefighter came to an abrupt end.

Ironically when a job comes up to clean up the house of a suicide victim it's Jack's turn to move on from the past when the victim and owner of the house turns out to be Nick Foasberg...Jack's first love and the person who betrayed him in unimaginable ways. But if Nick is Jack's past then what does that make Nick's cousin Ryan Halloran...is it possible he's Jack's future?

To say the least Jack's career gave this story an unusual setting at times and there's a solid cast of interesting characters adding depth and dimension to the story. There was a fair amount of tension and misunderstanding between Jack and Ryan, which was appropriate given the history between these two and add in some interference from Jack's well meaning friends and things definitely got challenging for Jack and Ryan at times.

I've enjoyed reading Z. A. Maxfield for a few years now and now I'm enjoying her stories on audio book. I'll probably never conquer my personal Mt. TBR but between my e-books and audio books I'll certainly be giving it a valiant try...so, I'm off to the next book in 'The Brother's Grime' and then who knows where the world of audio will lead me in quest to conquer Mt. TBR.