Hello Internet! It’s me, SA Stovall, here to talk about my upcoming Christmas novella, Thirty-One Days and Legos, as well as share a quick excerpt!

Thirty-One Days and Legos follows two men, Owen and Carter, who adopt a pair of brothers right before the Christmas season. While Owen wants to celebrate all thirty-one days as though they’re each their own Christmas, Carter struggles to connect with the two kids. Add in a new adopted cat and hijinks ensue! Check out the excerpt (Carter trying to relate to Edmund, the youngest of the boys) and see what I mean! 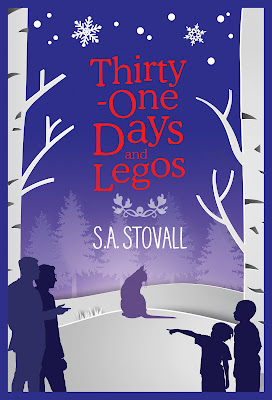 Park rangers Carter and Owen Williams have decided to expand their family and adopt two brothers—boys they rescued a year before when they tried to escape the foster system and flee to Canada. After completing their parenting classes, Carter, a reserved man who enjoys the simple life, swears he’ll be the best father possible. His patience is tested, however, when one brother adopts a cat out of the snowy Voyageurs National Park and the other brother refuses to talk about what’s bothering him.

Owen wants to make sure their first Christmas together is a special one, and he decides all of December should be a celebration. He has an activity planned for each of the thirty-one days, but none of them seem to go off without a hitch. The cat has fleas, the boys need to attend a court hearing, and Carter is more than a little overwhelmed.

But Carter is 100 percent determined to make his new family work. He just has no idea how….


After a minute in, I struggle to think of something to talk about.

What do kids like? Destroying things? No, that’s incidental.

Edmund turns around to face me, his eyes staring straight into mine as though he can’t wait to hear what I have to say.

What’re we going to talk about? He’s six. It’s not like we can have deep philosophical discussions. What if I damage his frail little mind? Maybe I should just remain silent.

No, the classes said not to do that.

“All right,” I say. “I need to level with you. I don’t know anything about small children.”
Edmund holds up the picnic basket. “I’m not small, ya know.”

“All right. I don’t know anything about medium children. Tell me things you like to talk about.”

Superheroes? Eh. I know next to nothing about superheroes. I exhale and ask, “Okay, if you could have any superpower, what would it be?”

With a scoff I say, “That’s ridiculous. That’s not even useful.”

I regret my comment the second it leaves my mouth. He’s six. I shouldn’t be so quick to judge his fantastical choices.

Edmund snorts and continues on the trail with his head held high. “Laser eyes are super useful.”

“I could laser bad guys, of course.”

“And what about everyone else?”


“I wouldn’t laser them, because you’re all good guys.”

I guess that’s a little more useful than I originally thought.

“Don’t touch it,” I say on reflex. I amble by the kid and head around the bend, toward the picnic area. “Wild animals should be left to their natural habitat. Human interaction can be dangerous for both the animal and the person. Observing from afar is the best course of action.”

I recite the warning straight from the park handout. I’ve repeated the damn thing over a thousand times to visiting school classes, tour groups, and individuals who ask about feeding the muskrats.

I whip around, half expecting Edmund to be mauled by a wolf. Instead, I find him crouched down, petting a small domesticated house cat. The gray feline purrs enough for the whole park to hear as she rubs against Edmund’s hands and legs. The erratic trail she left in the snow goes on for some time. She’s been traveling for a while.

“But look at how skinny she is.”

Sure enough, the cat has visible ribs and scrawny limbs. It’s a miracle she’s even alive. Most house cats don’t make it long in the snow, especially if they don’t have anything to eat.

Edmund sets the picnic basket down and picks up the cat. “We need to take her with us.”

“No. We’re not taking the cat. Put her back where you found her.”

Edmund stares up at me with wide eyes. “But we can’t leave her.”

“But then she’ll be all alone.”

Tears well in the corners of his eyes. I grit my teeth and say nothing as he unzips his jacket and scoots the cat inside, allowing her head to poke up out of his collar. The feline doesn’t protest. If anything, she purrs louder, no doubt craving the warmth.

“She needs a family,” Edmund continues, now hugging the cat like he’s hugging himself.

After a long sigh, I say, “Fine. We’ll bring her to the pound. She’ll find a family there.”

“No, not that!” Edmund turns away from me and strokes the cat’s head. “The pound is… it’s the foster home for animals. She’ll get sad. And then she won’t talk as much. Just like Luke.”

I catch my breath.

How did this turn so upsetting so quickly?

Still, I can’t let him keep the cat. I hate cats. And we’re in the middle of becoming accustomed to two new kids. Adding a cat to the mix isn’t right. As long as Edmund doesn’t name it, I can still—