You know, it’s true. Sometimes the best presents, the best gifts, really can’t be wrapped. It’s that stranger that comes over and digs your car out of the snow. That neighbor that invites you over for dinner when they know or discover you’re going to be all alone for Christmas. A smile when you really need it. Or a compliment.

Or most important, a message or lesson that changes your life.

Back when I first started writing (and actually selling) my stories, I wrote a novella called Christmas Wish, about a chubby guy who longs to be a gym god. That’s what he wants. And who should overhear him? Why, none other than Santa Claus, himself. The “real” Santa Claus grants Harry’s wish and he wakes up the next morning with a face, a body, and certain other “attributes” of the gorgeous muscle men he so admired and he couldn’t be happier. But, he soon learns that having something is often not as fulfilling as wanting it, and that being a gym god isn’t all it’s cracked up to be.

The next year, in Christmas Cole, I wrote a story where Mrs. Claus gets into the mix, this time, doing the opposite of her very long-time life partner. She transforms a rude and conceited gym god into an overweight man and he quickly discovers that all his friends only liked him for his looks and that it was the family he’d ignored that was truly there for him.

I continued to write holiday stories every year after that, but they took a different turn. They were still filled with holiday warmth and light, but they were stories based more in reality. A scavenger hunt where the prize turns out to be true love. A daughter who forms an ingenious plan to find a loving mate for her lonely father. A angry man who flees to Hawaii to escape family obligations and finds something entirely different when he experiences Christmas (and love), Hawaii-style. And, a department store Santa’s elf who melts the frozen heart of a very grumbly man.

But you know…my favorite kinds of Christmas stories are the ones where there’s a little bit of magick (with a “k”).

Stories like It’s a Wonderful Life, How the Grinch Stole Christmas, The Polar Express and, of course, A Christmas Carol.

So, this year I decided to put the magick back in the holidays, and what better way than by bringing back Father Christmas, the Yule King…a.k.a. Santa Claus?

This time, a man named Ned Balding, frustrated and head of a big family business since his father died, is growing more and more stressed with the responsibility he did not necessarily want. He’s grown bitter and is lashing out at everyone, even friends, family and those he loves most. He’s turning into a modern-day Scrooge, doesn’t know how to stop it, and isn’t even trying to be a nice guy anymore. 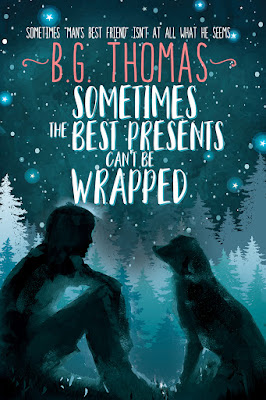 Ned Balding used to be a decent man—until the stress of seemingly countless responsibilities changes him, and he becomes cold and driven—the kind of man who considers firing an employee days before Christmas. The kind of man who kicks a dog…. But Ned’s transgressions haven’t gone unseen. A Salvation Army Santa witnesses his misdeeds and decides Ned needs to be taught a lesson.

When Ned wakes up the next morning, he’s stunned to discover he’s been transformed into a dog.

In the past year, Jake Carrara has lost his mother, a lover… even his dog. His boss came close to firing him just before the holidays. He isn’t sure he’s ready for another pet when he’s asked to foster a dog, but Jake’s good heart won’t let him refuse. Little does he know, this isn’t just any dog.

Through a twist of fate, two people with little reason to be friends might teach each other to rediscover the good—and the love—in life.


Yes, Ned wakes up to find that he has been transformed into a dog. A black lab to be precise. Family calls the local pound to have him taken away. He can’t talk! He can only bark!

And now, as a dog, Ned must find his humanity again, learn to love, and to put others first…or according to Father Christmas, he will remain forever a dog.

Does he stand a chance…?


Readers who have received ARCs have told me it’s my best holiday story ever, even better than Grumble Monkey and the Department Store Elf. Are they right?

Only you can say for sure!

Happy Holidays, no matter what your beliefs! And may you have a blessed New Year!

This story is a rather different take on A Christmas Carol. It's adorable, really, and I had a fabulous time reading it. The author, one of my favorites, also deviated from his usual style in this story - which I also quite enjoyed.

Ned Balding is a bit of a Scrooge. After his father died, he's been running the family's company, which allows no time for anything else. Stressed, overworked, Ned no longer resembles the decent guy he used to be. In fact, he's gone as far as considering firing a long-time employee right before Christmas, because the poor guy took a couple of days off after losing his dog. Listen, Ned - dogs are members of the family, and people naturally grieve, and your piss-poor attitude made me mad. Especially since the man in question, Jake Carrara, is still grieving the death of his mother, and the loss of his boyfriend - all in the same year. So Ned needed to cut Jake some slack.

Thankfully, Ned is prevented from firing Jake when a friend and co-worker steps in and halts Ned's tirade.

On the way home, still raging mad, Ned attempts to kick a dog, which is witnessed by a Salvation Army Santa - who issues a stern warning, and tells Ned that enough is enough.

Come morning, Ned wakes up in his apartment, but the world looks very different than it did the night before. For one, Ned seems to be closer to the floor. And covered in fur. Colors aren't the same either.

I really liked how well the author must have done his research to let us experience life as a dog. Some of it was fascinating, like the colors dogs apparently see, and some of it was hilarious, like lifting a leg to tinkle. I giggled quite a bit, watching Ned figure out how to be a dog.

Long story short, Ned is shocked, howls and barks, and ends up at the pound - well, almost. He's super lucky that the guy from the pound knows HD (he from Hounddog and Bean), so Ned, fortuitously, is put into foster care, being taken care of by none other than the guy he almost fired - Jake.

As Ned spends his days in Jake's apartment, and his nights sleeping on the bed with Jake, he starts to realize what an utter ass he's been, not only to the people he works with, but also to his remaining family. And he realizes that he has to make some drastic changes - if only he was able to figure out how to turn back into a human. On top of that, he sees Jake in a wholly new light, and can't for the life of him figure out why he would have been such a jackass to the man.

And then Ned has to make a choice, one that could cost him dearly - but he does what he does out of love, and by then he realizes that love is worth anything and everything.

Due to the plot here, we actually don't really see the romance fully developing, as Ned spends most of the book as a dog, and Jake obviously doesn't realize that the dog he's fostering is in reality his boss, but we do get a very happy ending, and a lovely epilogue that takes place a year later and showcases the changes Ned has made.

I thought it utterly adorable, with a good sprinkle of Christmas magic, humorous moments, and a massive act of selflessness that really shows the reader how much Ned has grown from the start of the book.

Find out more on his website/blog.