Blogtour: Regret Me Not by Amy Lane 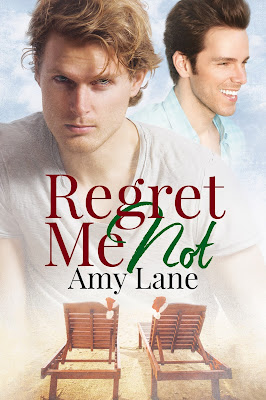 Pierce Atwater used to think he was a knight in shining armor, but then his life fell to crap. Now he has no job, no wife, no life—and is so full of self-pity he can’t even be decent to the one family member he’s still speaking to. He heads for Florida, where he’s got a month to pull his head out of his ass before he ruins his little sister’s Christmas.

Pierce stared at the note, only marginally prepared for the giant ache that bloomed in his chest.
Aw, Hal—you deserve so very much more.
He looked around the room again, eyes falling on the clock radio. He was supposed to leave in an hour—he’d told his sister specifically that he’d be in Orlando by lunch so he could bake cookies with her kids.


He looked at the note again and tried hard to breathe.


Happy surprises are the hallmark of any holiday story, but we all know the holidays can be a tough gig. Some years we’re recovering from losses, and some years we’re just recovering from the year itself. (2016, I’m looking at you.)  Sometimes we cling to holidays to be our starting over point—our way to get beyond the not so bright and not so shiny surprises that life hit us with when we weren’t looking.

I got pulled out of my classroom October of 2010, essentially for giving a student a book and, well, being Amy Lane. As the holidays approached, I was really not doing so well.

My short attention span—always an, erm, delight to my family had become something truly spectacular. I would zoom out when the kids were talking to me, zoom out when I was taking them to school, zoom out when I was doing the dishes. Any time I wasn’t forced to engage—and I do mean forced—I was in the place where my school had threatened to have me arrested and Mate and I were going to lose the house and I was going to have to go to trial when I couldn’t even put a sentence together without hyperventilating.


I got home once after dropping kids off at school sobbing my heart out. Mate asked me what was wrong and I made an “all encompassing” gesture and sobbed some more.  He looked me dead in the eye and said, “Don’t worry. We’re not going to lose the house.”  He was probably lying his ass off in a worst case scenario, but I swear it was the only way I could function that day, and the next one as well.

I was the definition of not good.

By the time Christmas rolled around, we realized that the worst stuff wasn’t going to happen, but I was still flailing. I’d put on an extra twenty pounds from not doing anything when I used to be the definition of active in my job, and I wrote a lot, because it gave me a break from a reality that wasn’t doing me any favors.

When we picked presents out for the kids that year, I was doing it under the assumption that adults weren’t getting much more than what we had the kids pick out for us. Since I usually went shopping with them for Dad, that meant we could spend a bit of money on him, and that was okay.

And a Kindle Fire, which we probably couldn’t afford.

I stared at that thing for a long time, not seeing the electronic gadget, but seeing all the books I could have inside it. It was my first Kindle (unfortunately it was the one with the shitty battery—I’ve since had a PaperWhite which I’ve adored) and it took me back—oh, to a lot of Christmases.  From getting an Anne McCaffrey book from my parents to spending part of my Christmas vacation from school in bed with Matt reading used paperback romances.

It wasn’t just a gadget (although the fact that it was probably helped catch Mate’s attention—not gonna lie) it was all the hope and promise books have always offered me. It was a chance to escape—a blessing to escape—as often as I needed to until I was all better.

Things have gotten better since that Christmas—much better. But that Kindle for me—that was a Christmas miracle. It wasn’t just money when I didn’t think we had any. It was a BatSignal from my spouse that I was not alone.

Please enjoy Regret Me Not this holiday season.  As you read it, keep in mind the many ways the guys find of saying that exact thing—you are not alone. It really is a thing to celebrate.

Amy Lane has two grown children, two half-grown children, two cats, and two Chi-who-whats at large. She lives in a crumbling crapmansion with most of the children and a bemused spouse. She also has too damned much yarn, a penchant for action adventure movies, and a need to know that somewhere in all the pain is a story of Wuv, Twu Wuv, which she continues to believe in to this day! She writes fantasy, urban fantasy, and gay romance--and if you accidentally make eye contact, she'll bore you to tears with why those three genres go together. She'll also tell you that sacrifices, large and small, are worth the urge to write.