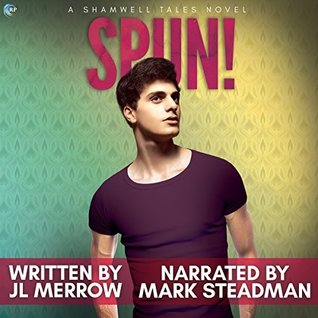 
An ill-advised encounter at the office party leaves David Greenlake jobless and homeless in one heady weekend. But he quickly begs work from his ex-boss and takes a room in Shamwell with easygoing postman Rory Deamer. David doesn’t mean to flirt with the recently divorced Rory—just like he doesn’t consciously decide to breathe. After all, Rory’s far too nice for him. And far too straight.

Rory finds his new lodger surprisingly fun to be with, and what’s more, David is a hit with Rory’s troubled children. But while Rory’s world may have turned upside down in the last few years, there’s one thing he’s sure of: he’s straight as a die. So he can’t be falling for David . . . can he?

Their friends and family think they know all the answers, and David’s office party hookup has his own plans for romance. Rory and David need to make up their minds and take a stand for what they really want—or their love could be over before it’s even begun.

We first met David in 'Out' and I liked him so when I found out that he was one of the MCs for this series I simply couldn't resist.

In 'OUT' David pursues Mark, who was his boss and he has a bit of a crush but not being the object of David's affections things stop before they get started, however, David and Mark do remain friends of a sort and when David's world begins to crumble after he gets caught in an indiscretion at work and the friend he's moved in with when he looses his apartment as a result gives him a not so subtle hint that it's time to move on. Desperate and not knowing where else to go David turns to Mark for help.

Mark offers him a job helping to set up his fledgling business and then helps him to find a place to live...enter Mark's friend, Rory.  Rory's straight but he doesn't have a problem with someone who's gay and a boarder to share the expenses would be good. So suddenly Rory has a roommate and he thinks he might like this idea.

I liked that this wasn't an insta-love relationship. David and Rory spent time together as roommates and friends getting to know each other, doing things together. Rory was uncertain about himself and I liked that we got to spend page time with Rory as he examined his life and his choices trying to sort out how he felt about David and what he wanted for himself and for him and Rory in terms of a relationship.

While Rory's looking at himself we also get to see David as he begins to realize that he's attracted to Rory, who isn't someone that David would typically be interested in but the more time David spends with Rory the more he realizes that he really likes Rory the person and he likes what he sees when he looks at Rory the man.


I liked the friendship that developed between Rory and David and the loyalty that they showed to each other from the start in spite of their insecurities and the uncertainty that comes with new love.

Once again Mark Steadman was the narrator for this story and once again he's done a wonderful job of bringing life to this story and it's characters. Providing unique and expressive voices for the characters while keeping familiarity for characters that we've met in previous stories...characters like Mark and Patrick from 'OUT' or Mark's daughter who we also met in 'OUT' and whom I have to say I enjoyed her more this time around.

'SPUN' is a story of love when and where you least expect it, of second chances and starting over. This has definitely turned out to be my favorite story in this series so far, but if there's more to come I look forward to taking a trip back to Shamwell and finding out whose story is coming next and hopefully seeing how the residents that I'm met so far are doing.

An audiobook of 'SPUN' was graciously provided by the publisher in exchange for an honest review.