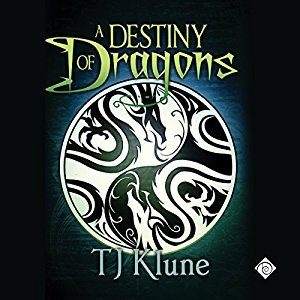 Once upon a time, the wizard’s apprentice Sam of Wilds got his happily ever after in the arms of his cornerstone, Knight Commander Ryan Foxheart. A year has passed, and while Sam’s been captured five or six more times since then, things are pretty great. His parents are happy, Gary and Tiggy still eat sass for breakfast, Randall is somehow alive despite being older than the gods, the King rules with a gentle hand, Kevin the dragon is as gross as ever, Morgan sighs a lot, Ryan continues to be dashing and immaculate, and Sam is close to convincing Prince Justin they will be best friends forever.

Because Vadoma, the leader of the Gypsy clan and Sam’s grandmother, has come to the City of Lockes with a dire prophecy written in the stars: a man of shadows is rising and will consume the world unless Sam faces his destiny and gathers the five dragons of Verania at his side.

And she brings along her second-in-command, a man named Ruv.

The first book in the DESTINY FUCK YEAH! Trilogy (because sometimes, having a destiny is the stupidest thing ever).

If you thought the e-book was good...

You really, really need to listen to this one on audio...

When this was first released back in June of this year I read it...there was no way I was waiting any longer for more Sam, Knight Delicious-face, Gary, Kevin and Tiggy and I loved it the story was all kinds of epic and awesome and I distinctly remember writing a rather effusive review...pictures were included, here's the link if you're curious...
Review: A Destiny of Dragons

Michael Lesley was the narrator for 'A Destiny of Dragons' and while I was totally enchanted with his narration in 'The Lightening Struck Heart' (TLSH) the first book in this series...I'm pretty much convinced that with the second book Mr. Lesley has exceeded my expectations. While I would have loved being able to listen to 'TLSH' again before jumping into the second book time just didn't permit that luxury but Michael Lesley's recreation of the voices for TJ Klune's unique characters in this series easily and effortlessly took me back to Verania with all it's magic and intrigue.

While I've listened to roughly 160+ audiobooks and I've become far more comfortable with what does or doesn't work for me in this format. I still don't profess myself to be any kind of an expert on anything other than what I like or love as the case might be in this instance. I truly couldn't imagine anyone else capturing the feel of this story better than Mr. Lesley has.


When I first listened to 'The Lightening Struck Heart' at the encouragement of  a friend...she was so insistent that she actually went to the extent of gifting the audiobook to me...thank heavens for persistent friends or I might still be missing out on this treasure. I was so incredibly surprised by how much I enjoyed the audiobook...I'd already read the book so I knew I'd like the story but Michael Lesley's narration took this story to a whole new level for me so needless to say I read 'A Destiny of Dragons' and loved it and then I heard from a certain persistent friend that once again Michael Lesley was going to be the narrator...so needless to say...SIGN ME UP! I was so on board to listen to the audiobook. What I truly wasn't expecting was that I would enjoy this one even more than I did 'TLSH" on audio...I truly didn't think it was possible. Apparently...I was wrong because this one wasn't as good for me the audiobook was even better.

'A Destiny of Dragons' is a more than solid follow-up to 'The Lightening Struck Heart' and for anyone who's a fan of TJ Klune and audiobooks...this one's a must. I know the third book in this series has been released and I am very unashamedly waiting for the audio edition of it because once again it's going to be narrated by Michael Lesley so I have zero doubt that once again it's going to be fan-freakin-tastic!

An audio book of 'A Destiny of Dragons' was graciously provided by the publisher in exchange for an honest review.

Buylinks are provided as a courtesy and do not constitute an endorsement of or affiliation with this book, autho or booksellers listed.