Book Review: The Easy Way by May Archer 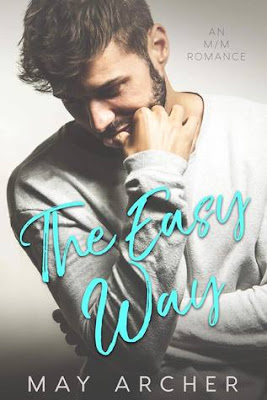 Camden Seaver had it easy - a loving family, plenty of money, and the freedom to follow his dreams while his older brother, Sebastian, took charge of the family business. But when a tragic plane crash killed his parents, all the responsibilities he never wanted landed firmly on his shoulders. Now saddled with his crazy, grief-stricken brother and his dad’s multimillion dollar company, Cam doesn’t trust in dreams anymore. He’s forgotten what “easy” feels like.

FBI Agent Kendrick “Cort” Cortland learned the hard way that he couldn’t depend on anyone but himself. Before joining the FBI, the one constant in his life was his foster brother, Damon - and then Damon disappeared. Now, Cort is determined to find his brother and to bring down the man responsible for ruining Damon’s life, Sebastian Seaver. He’s got nothing left to lose.

When Cort’s investigation leads him to Seaver Tech...and Camden Seaver...what started as a quest for revenge and a one-night deception quickly turns into far more than either man bargained for. But how can either man trust in something that seems so easy? As long-held secrets are revealed, the attraction between Cam and Cort becomes combustible - an undeniable love that will either make or destroy them. Will Cam and Cort let their conflicting loyalties drive them apart? Or will they decide that sometimes love is the easy way?

May Archer is a new to me author, which is always risky, but because this book is available on KU, I gave it a go. And I'm really glad I did! The Easy Way is sweet and sexy, with a side of mystery.

I saw the villain coming a mile away, but that didn't dampen my enjoyment of the story; half the fun was getting there.

Camden and Cort (Kendrick Cortland, but don't call him Kenny) have sizzling chemistry, and Archer doesn't skimp on the steam. Camden is so hot when he begs, and I loved Cort's possessive, growly side.


The story has serious angst potential, but in the end the men decide to TRUST first, ask questions later. Maybe that's foolhardy, but it's also kind of romantic.

Cam, especially, has a lot to lose. Cort's not honest with him initially, but Cam can't resist Cort's adorable flirting.

The ending felt slightly rushed, with some loose ends left dangling. There's an epilogue set a few months down the road (and a bonus epilogue set a year later available as an Instafreebie), but both are purposely vague.

Cort and Cam get their HEA, but the secondary characters are barely mentioned. This is clearly by design, since this is the first book in a series, but it was still a bit awkward.

Book 2 comes out in November. I'll be waiting!

Download links are provided as a courtesy and do not constitute an endorsement of or affiliation with the book, author, publisher, or website listed.
Posted by Dani(ela) at 12:00 PM