Blogtour: Off The Ice by Avon Gale and Piper Vaughn

Hi! I’m Avon Gale, and I’m here to talk to you today about hockey! My new book, Off the Ice, co-written with Piper Vaughn, is a story about a hockey defenseman who falls for his slightly grumpy sociology teacher. It was so much fun to write, even if Piper insisted on dedicating it to a Blackhawks player. (I’m a Blues fan – look, hockey is the most fun when you have rivals, okay?)

I wasn’t always a hockey fan. I grew up in the south, in a family obsessed with college basketball (like most Kentuckians) and who were also huge Cincinnati Reds baseball fans. While I was mildly aware hockey existed, it wasn’t a thing I knew about.

When I moved to Missouri for college, my boyfriend (now Mr. Gale) took me to a hockey game. I know I’ve told this story before, because I have literally no shame, but we were waiting for the game to start and I asked him, “What happens if the ice cracks?” And he sort of looked at me strangely and then explained what a zamboni was. I then asked, “No, but what if it cracks like, during the game?”

It took him a few seconds to understand what I was getting at, and then he goes, “You think there’s a swimming pool under there, don’t you.”

Yes, yes I did. Look, I don’t know how that was supposed to work, okay? I’d never even been ice skating at this point.

I’ve obviously come a long way from that point – hey, I can talk about Corsi statistics now! – but we’re all new fans at some point. I didn’t really get into hockey until 2010, when my best friend, a Canadian, got me watching Canucks games. Then I was in this really weird position of being able to choose my own sports loyalty – which, when you grow up in Kentucky, uh, that’s already inked in your blood (unless you want to cheer for Duke and be disowned.)

I thought I’d be a Canucks fan, because my friend was. But here’s what I learned about sports teams – unless you’re born with allegiances already established because your family is intensely devoted to a team, you don’t really pick them. They pick you. So here I was, watching the Canucks, and my friend says to me, “You should pick an Eastern Conference team to watch.”

“Just don’t pick the Bruins,” she adds. This sentiment was echoed by several other people, so I started watching Bruins games just to “cheer against them” as instructed.

And then, well. It turned out that didn’t work so well. I remember this moment during the 2011 playoffs when then-Bruin Andrew Ference flipped off the crowd in Montreal and the announcers were horrified, talking about how Ference was a disgrace and didn’t even score enough goals to warrant such behavior. I was in love, and that was that. Hey, I’ve always liked a good villain, what can I say? I was the kid who wanted Cobra to win just one time against GI Joe, or for the Misfits to have a better show than the Holograms. (If you get those references, we must be the same age.)

That year turned out to be a little awkward, because the Bruins and the Canucks met in the Stanley Cup Finals and the Bruins won in a game 7, in Vancouver. Not only that, but about a week afterward my Canucks fan bestie and I met up in Boston to drive to a music festival in North Adams, Massachusetts. I’ll never forget her face as we stood in Quincy Market, gazing up at a huge banner with Bruins’ captain Zdeno Chara hoisting the Cup.

We took a picture in front of TD Garden, me in a Bruins shirt and her in a Canucks shirt, arms around each other. The guy taking the picture asks, “Is this a joke?” It was a pretty intense and ugly series. Look it up on YouTube if you don’t believe me.

Of course, the Boston Bruins have done nothing but make me suffer ever since, including losing the Stanley Cup, at home, to the Chicago Blackhawks in 2013. They’ve tried to make up for that by failing to either make the playoffs or make it out of round one since then, because caring about sports will only bring you sorrow.

But as I think every year, “Maybe this season will be different!” Not sure if this makes me an optimist or an idiot, but either way, I love it – no matter how much I yell about it (which, if you follow me on Twitter, you’ll know is a lot.) 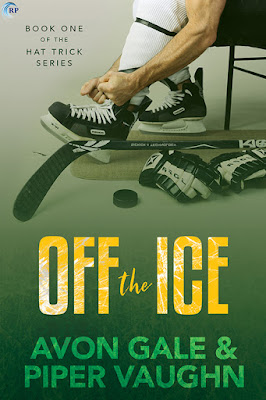 Tristan Holt is nothing if not pragmatic. Despite a flourishing career as a defenseman for the Atlanta Venom, Tristan knows he can’t play hockey forever. One day he’ll retire—if an injury doesn’t force him to hang up his skates first. His backup plan? Finishing his business degree. But he doesn’t count on a very inappropriate attraction to his standoffish sociology professor, Sebastian Cruz.

Sebastian is on the bottom rung of the Sociology Department at Georgia State. He has his sights set on tenure, and he can’t afford to be distracted, especially not by a sexy student with a body straight out of Sebastian’s dreams. No matter how much Tristan tempts him, that’s one line Sebastian won’t cross. At least not until summer classes end. After that, everything is fair game.

But Sebastian lives loud and proud, and Tristan is terrified of being the first out player in the NHL. Neither of them can afford to risk their hearts when they can’t imagine a happily ever after. The problem is, unlike hockey, when it comes to love, there are no rules.

Avon Gale grew up in the southern United States, and now lives with her very patient husband in a liberal Midwestern college town. When she’s not writing, she’s either doing some kind of craft project that makes a huge mess, reading, watching horror movies, listening to music or yelling at her favorite hockey team to get it together, already. Avon is always up for a road trip, adores Kentucky bourbon, thinks nothing is as stress relieving as a good rock concert, and will never say no to candy.


To celebrate the release of Off the Ice, one lucky winner will receive a Venom t-shirt in their size and Venom notebook! Leave a comment with your contact info to enter the contest. Entries close at midnight, Eastern time, on November 4, 2017. Thanks for following the tour, and don’t forget to leave your contact info!