Hello, everyone! Happy Wednesday! Ari here, of Ari McKay. We’d like to thank My Fiction Nook for hosting us today for the blog tour for our re-release of Fortune’s Slings and Cupid’s Arrows!

Rather than talk about the story itself, I’d like to spend a few minutes talking about what a special opportunity we were given by Dreamspinner Press when they accepted the Lawyers In Love trilogy for publication. You see, Fortune’s Slings was one of our earliest stories, originally published in February 2013 when we’d only been published professionally for about eight months. Even though McKay and I had been writing together for nearly nine years at that point, we were still learning new aspects of our craft involved with writing at specific lengths for a rather different kind of audience. To be honest, we were also under a deadline, and the original form of Fortune’s Slings suffered for it. We knew there was a problem with the story, but we couldn’t figure out the best way to fix it before we had to submit it.

We were hopeful that we’d be able to address the issues during editing, but the editor thought the story was fine as it was. So the story was published, and, quite rightly, it wasn’t as well received as we might have liked. But what was done was done, and at least with the comments we were able to finally see what we should have done from the beginning -- the only problem was, it was already too late.

Fast forward three years or so, and our publisher that held the rights went out of business. We had close to twenty stories - from shorts to novels - that were now without a home. We knew we could self-publish them, but there were some that we felt might be of interest to a publisher. So we offered several works, including all three stories of Lawyers in Love -- including the third, never-before-published story -- to Dreamspinner. And we were over the moon that they were accepted!

This, of course, gave us the chance to re-work Fortune’s Slings and make it better. We found that flipping the point of view of one particular scene near the beginning, making it from Dane’s point of view instead of Cal’s, made everything else fall smoothly into place. We felt that we now had a story that showed the real strengths of the characters, rather than something that appeared to border on dub-con -- especially when we certainly hadn’t intended the scene to be read that way. We went ahead from that point and basically rewrote almost the entirety of the story, but we were happy to do it. Now we could be proud of the story, instead of cringing when we thought of it and holding it up to ourselves as an example of exactly how NOT to write a romance!

So there you have it, the growing pains that can happen to an author, and our own happily ever after for characters that we had loved but hadn’t been able to do justice to at first. We hope you’ll give the new version a chance, and we hope that, like us, you’ll find that second chances sometimes make all the difference. 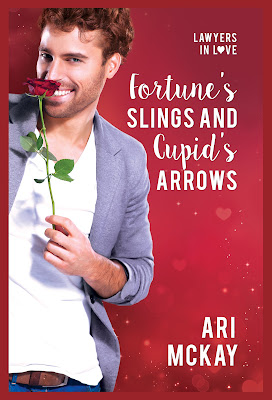 Dane Coulter is so far in the closet, he can’t even see the door – not even when his father forces him into an engagement he doesn’t want. Randolph Coulter rules his family with an iron fist, and Dane is so concerned about his mother’s happiness that he is willing to sacrifice his own. But when his best friend Cal seduces him in a desperate attempt to make Dane confront the truth about himself before he makes a terrible mistake, it only complicates matters and drives a wedge between them. Now Dane is alone, and he has to make a decision. Can he stand up to his father and fight for his own happiness, or will he lose Cal forever?


Ari McKay is the professional pseudonym for Arionrhod and McKay, who have been writing together for over a decade. Their collaborations encompass a wide variety of romance genres, including contemporary, fantasy, science fiction, gothic, and action/adventure. Their work includes the Blood Bathory series of paranormal novels, the Herc’s Mercs series, as well as two historical Westerns: Heart of Stone and Finding Forgiveness. When not writing, they can often be found scheming over costume designs or binge watching TV shows together.