Blogtour: Ante Up by Kim Fielding 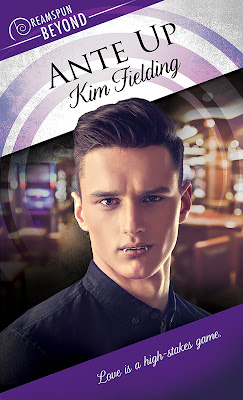 Love is a high-stakes game. A century and a half ago, Ante Novak died on a Croatian battlefield—and rose three days later as a vampire. Now he haunts Las Vegas, stealing blood and money from drunken gamblers and staying on the fringe of the powerful vampire organization known as the Shadows. His existence feels empty and meaningless until he meets beautiful Peter Gehrardi, who can influence others with his thoughts.

Snark
“Just the place for a Snark!” the Bellman cried,
As he landed his crew with care;
Supporting each man on the top of the tide
By a finger entwined in his hair.
—Lewis Carroll, The Hunting of the Snark

With all due respect to Lewis Carroll, I think almost everywhere is just the place for a snark. Or for a snarky character, anyway.

Let us begin by defining snarky. It’s a kind of sarcasm, but I think of it as tending toward the witty. And while all of us can be sarcastic at times, a true snark uses sarcasm almost all the time: when things are going well and when everything’s gone to shit.

From a storytelling perspective, snarky characters serve a variety of purposes. They can help lighten the tension in a scene that might otherwise be too intense. They allow the author to get away with a certain amount of plot implausibility by acknowledging those implausibilities and therefore letting the audience in on the joke. They can act as a foil to characters who are too earnest, too good, too evil. And snarky characters are just plain entertaining.

I think it’s hard to write snark well, at least if you want to the character to be sympathetic. Too much lip and he or she becomes obnoxious, a wiseass nobody wants to have around. Snarky characters should be three-dimensional people in their own right. But well-placed snark is a thing of beauty.

Snarky characters have always been among my favorites. Chandler Bing on Friends. Darlene on Roseanne. Mad Sweeney in American Gods. Tyrion Lannister in Game of Thrones. Notice how well all these people play off—and balance—the events and people surrounding them. In Star Trek, Dr. McCoy’s lines were a great contrast to Spock’s logic and Kirk’s lounge-lizard derring-do. In Blazing Saddles, Gene Wilder’s character is almost too sweet, and everyone else comes off as nearly cartoonish; but Cleavon Little’s Bart invites us to make fun of the bigotry and ridiculous tropes. In season 2 of Buffy the Vampire Slayer, when Angel-without-a-soul is being all serious with his dumb plan to destroy Buffy (and the world along with her), Spike steps in to poke fun.


"Now, I know you haven't been in the game for a while, mate, but we still do kill people. Sort of our raison d'etre, you know."

And that brings me to my own book, Ante Up, which releases today (yay!). My vampire, Ante, is on the broody side. But he meets up with (and falls for) Peter, who’s not exactly human and who tends toward snark. Scary things happen to them. But Peter’s humor, even when danger looms, helps to bring a bit of sunshine into Ante’s life. Let’s just hope that sunshine doesn’t burn Ante to a crisp!
Peter stood and walked to the window, where he stared out at the lights. Then he turned back to Ante. “Are there other vampires in town?”
“Yes. Dozens.”
“Do you have, like, meetings? Clubs? Secret handshakes and funny hats?”
“I avoid the others when I can.”
—Ante Up

Peter tried to walk in the direction of the coffee shop, but Ante held him still. “Not yet. I must feed first.”
“And I’m guessing a burger and fries isn’t going to do it for you.”
Ante shook his head. “I will try to find someone here, but—”
“How much do you need? I mean, you don’t drain people dry, do you?”
“I have,” Ante replied gravely. “A long time ago, when my appetite was greater and my self-control was poor. Now I try not to harm people. I take a pint at most.”
“So it’s like donating blood, only without the cookies and orange juice.”
“It is—”
“Come snack on me.”
—Ante Up

Ante has a tendency to take his unlife pretty seriously, but Peter, while hardly a flake, helps to lighten him up. I think that’s a big part of why Ante falls for him.

Who are your favorite snarks? Comment here and make sure to enter the Rafflecopter below!