Blogtour and ARC Review: All Of The Above by Quinn Anderson

All Of The Above

Thanks for joining me on my blog tour. I’m Quinn Anderson, author of the Murmur Inc. series, and I’m here to share some inside information about All of the Above, coming out November 20th. Stay tuned to hear fun facts about this novel, learn where I get my ideas from, and find out more about the characters. Leave comments on the tour posts for a chance to win a $10 Riptide Publishing gift card! 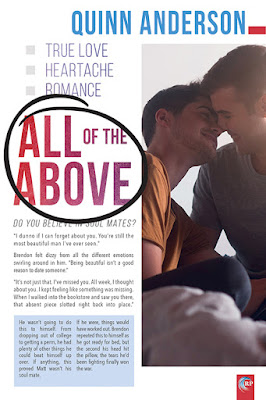 Brendon isn’t in a rut, per se—he just always seems to be in-between things. Jobs. Degrees. Boyfriends. He never finishes what he starts. The perfect path is out there somewhere, and if he can just figure out what it is, he’s certain everything else will fall into place.

The last thing he expects is to meet his soul mate in the pages of a magazine quiz. “Who Is Your Perfect Man?” by Matthew Kingston seems like a road map to his future husband: the author himself. Brendon may not have his life figured out, but if Matt is as romantic as his quiz, Brendon can check “true love” off his to-do list.

When Brendon fakes a meet-cute between them, Matt proves to be as wonderful as he hoped. The more Brendon gets to know him, the harder he falls. But Brendon has a confession to make: how can he explain to Matt that he arranged their “fated” meeting? Brendon can’t tell if he’s found his soul mate, heartache, or all of the above.

I quite liked this book once I pushed past the first 30% or so. Brendon, one of our MCs, works what's basically dead-end job as a salesperson for hair straighteners and other beauty products in a local mall, while also going to school to become a hair stylist/make-up artist. He's friends with a married couple running the sales stand next to his.

Brendon also comes across as a bit lonely, though he's described as someone who doesn't usually finish what he starts, a bit flaky, a bit effeminate. He's gay and there's no hiding it. His hair frequently changes color. He can't seem to hold on to a boyfriend, looking for perfect and never finding it. He felt real enough to me, and definitely likable, and I hoped he would find what he was looking for.

Then he comes across a quiz in a local magazine asking "Who's Your Perfect Man?" And it appears as if the author of the quiz, one Matthew Kingston, is just perfect for Brendon.

The meet-cute is fake, obviously, as Brendon sort of stalks Matthew online, finds his pictures and his usual hangouts, realizes that what he sees he definitely likes, and begins hanging out at those places, hoping to run into Matthew.

Which he does, after a while.

They have an awesome first date, and they seem to have a lot in common, considering how much Brendon knows about Matthew's preferences, which he uses to his advantage. And then Brendon realizes he has to come clean, knowing Matthew abhors liars, and what might have been turns into heartache.


I didn't actually like Matthew all that much for most of the book, to be honest. He came across as a bit of a judgmental dickhead. Even after he supposedly forgives Brendon for the initial deception, and they're on their 2nd date, something Matthew apparently spent some time setting up, he keeps making snarky remarks about Brendon's lie, until Brendon, suddenly finding his backbone, calls him on that shit real quick. I cheered in my head when that happened, because I was getting quite irritated with Matthew at that point. His behavior was, while certainly understandable, not something someone with forgiveness in his heart would likely do.

I did warm up to him eventually, when he makes an about-face and the two of them really talk things through. I really liked that Brendon who, despite feeling guilty about his earlier deception, held Matthew's feet to the fire when his words of forgiveness didn't match his actions.

The feelings between them grow quickly, but believably, and I had no issues with the time frame here. I do believe that Brendon and Matthew were well-matched, and thus the rapidity with which they developed into a full-blown relationship was perfectly fine with me.

This is the kind of easy, happy reading that I need every so often. It's a bit quirky, on the sweet and fluffy side for sure, and definitely worth your time.


** I received a free copy of this book from its publisher via Netgalley. A review was not promised in return. **

To celebrate the release of All of the Above, one lucky winner will receive a $10 Riptide gift card! Leave a comment with your contact info to enter the contest. Entries close at midnight, Eastern time, on November 25, 2017. Contest is NOT restricted to U.S. entries. Thanks for following the tour, and don’t forget to leave your contact info!