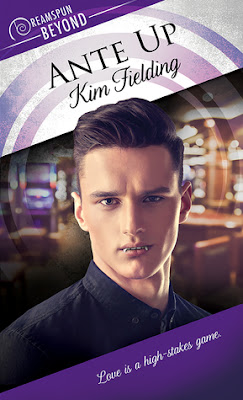 
Love is a high-stakes game.

A century and a half ago, Ante Novak died on a Croatian battlefield—and rose three days later as a vampire. Now he haunts Las Vegas, stealing blood and money from drunken gamblers and staying on the fringe of the powerful vampire organization known as the Shadows. His existence feels empty and meaningless until he meets beautiful Peter Gehrardi, who can influence others with his thoughts.

Even though I typically avoid Dreamspinner's Dreamspun line (I'm not a fan of the Harlequin trope), I like paranormal and I LOVE Kim Fielding, so I gave Ante Up a try.

Truth be told, I was hoping for something grittier. The book features a vampire after all. But Dreamspun has a certain formula, and dark, sexy books aren't a part of it.

Ante Up is not heavy on the angst. There's some danger and action toward the end of the book; it's the typical good vs. evil trope.

But for the most part, this story focuses on the relationship between a lonely vampire (Ante, originally from Croatia; born in 1840) and a . . . well, that might be a spoiler; let's just say Peter isn't quite human. Peter is charming and beautiful, and people do as he says.

Peter's ability to influence others can be a powerful weapon if used with evil intent. Ante is tasked with bringing Peter to a coven of vampires who rule Las Vegas, a place that suits Ante just fine (cheap hotel rooms with a sink to wash Ante's one set of clothes, easy access to "snacks" and cash, and windows designed to keep out the light).

I didn't really feel strong chemistry between Ante and Peter. Peter is kind of a smartass, and Ante speaks like a grammar textbook, even during sexual encounters.

It's pretty much insta love for the MCs, but I'm okay with that, particularly in books with a paranormal theme. I mean, if you're 177 years old, you've been around the block a few times.

The ending was slightly disappointing; it's a HEA, but with a loophole.

I still enjoyed the story, though. It really picked up a third of the way in, and I was engaged with the plot and characters.