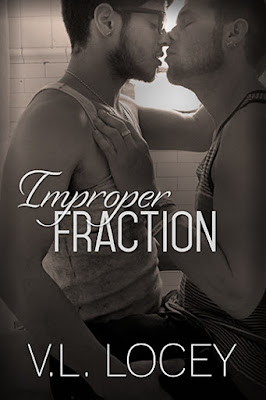 
O’Malley Ramsey, math aficionado, grew up next door to Garrison Rook, All-American athlete. While O’Malley dreamed of numbers and kissing Garrison, Garrison’s tastes ran to home runs and hot chicks. During a family celebration the night before both young men were heading off for college, O’Malley joyously discovers that Garrison isn’t quite as straight as the star athlete had been pretending to be. Vows to return to each other quickly followed a few clumsy kisses in the old treehouse in the Rook’s backyard.

Four years later, the two ex-friends meet up at a summer camp where O’Malley is serving as a counselor. Garrison is desperate to make things right with his childhood friend, but can O’Malley, still nursing the pain and mistrust of Garrison’s betrayal, ever forgive or love Garrison again?

O’Malley is a math geek and Garrison’s a jock. They’re neighbors and have grown up living next door to each other. O’Malley’s gay, Garrison’s straight…sorta’, kinda’…almost? Except he’s not. Turns out Garrison’s bi or he thinks he might be gay…he’s not sure. This was honestly one of the best parts of this story. There was no ‘oh you’re bi, you can’t commit, I don’t date bi men’…nope, no bi-shaming here. In fact, this was where I really came to like O’Malley because he was supportive of the fact that it was Garrison’s decision whether he was gay or bi. For me, O’Malley totally rocked this one.
O’Malley knows that his dreams of him and Garrison as a couple are just that…dreams. So, when Garrison kisses him during a family celebration the night before they’re heading off to college. But it’s not the kisses that break O’Malley’s heart it’s the promises to stay in touch, to come back to O’Malley…the promise that there will be a them and as the weeks and months slip by and Garrison not only doesn’t stay in touch but it in fact starts to feel like he’s avoiding O’Malley that leaves O’Malley hurt, angry and heartbroken.
Four years pass before the former friends find themselves within proximity of each other again.
‘Improper Fraction’ is about coming of age, second chances, coming out, seeking forgiveness, forgiving, falling in love, falling out of love and back in love and ultimately, it’s about finding out that home’s not a place it’s a person…the person who completes you and makes you want to be more, better than who and what you are.
The first part of this story gives us a lot of background around O’Malley and Garrison and their family and I thoroughly enjoyed it. The friendship that O’Malley, Garrison and their families shared was sweet and heartwarming. O’Malley lost his mom at a fairly early age and Garrison’s family just absorbed O’Malley and his father into their family. These two families were close and I really loved the friendship and supportive relationship that they all enjoyed.
Unfortunately, it was the middle part of this story that I struggled with; for me it dragged a bit at times, but it was also the part of the story where we get to see O’Malley and Garrison begin to find their way back together. First as friends and then slowly as lovers. It was also during this part of the story that we get to see a more of Garrison’s sister, Emily. I very much enjoyed this character…almost as much as O’Malley. I must admit I struggled a bit with the character of Garrison. Mostly because I was disappointed with his behavior at first, but it was actually the ending of this story that made me step back and take a second look at Garrison’s actions from the earlier part of this story and realize that ‘sure I was disappointed in Garrison’s behavior but he was young and hurting O’Malley was never his intent. Garrison needed to come to terms with things about himself before he would really be able to enter into a relationship with anyone much less the man he wanted to spend the rest of his life with.


There was a secondary plot in this story and at times it may have seemed random and unnecessary but honestly, I was good with it felt like what it was one of those random events that happen in our lives without rhyme or reason as to why. I liked that while this event played out for the most part in the background it also had a definite impact on the ending and overall for me it worked.
While ‘Improper Fraction’ was not my first experience with this author as she is one of the authors of ‘The Harrisburg Railers’ series that I have also been enjoying. This was my first experience with V. L. Locey as a solo author, but it definitely won’t be my last, this author can definitely hold her own and I now have a backlist of books to get caught up on.
*************************


A copy of ‘Imperfect Fractions’ was graciously provided by the author in exchange for an honest review. 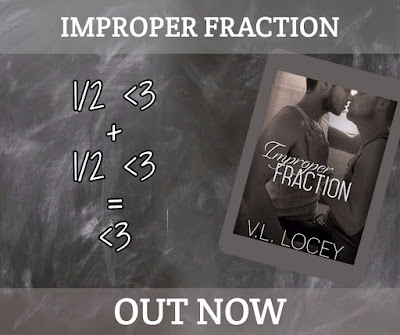